The Best Axes Ever

Handmade artisanal axes are all the rage, and none are better than these four 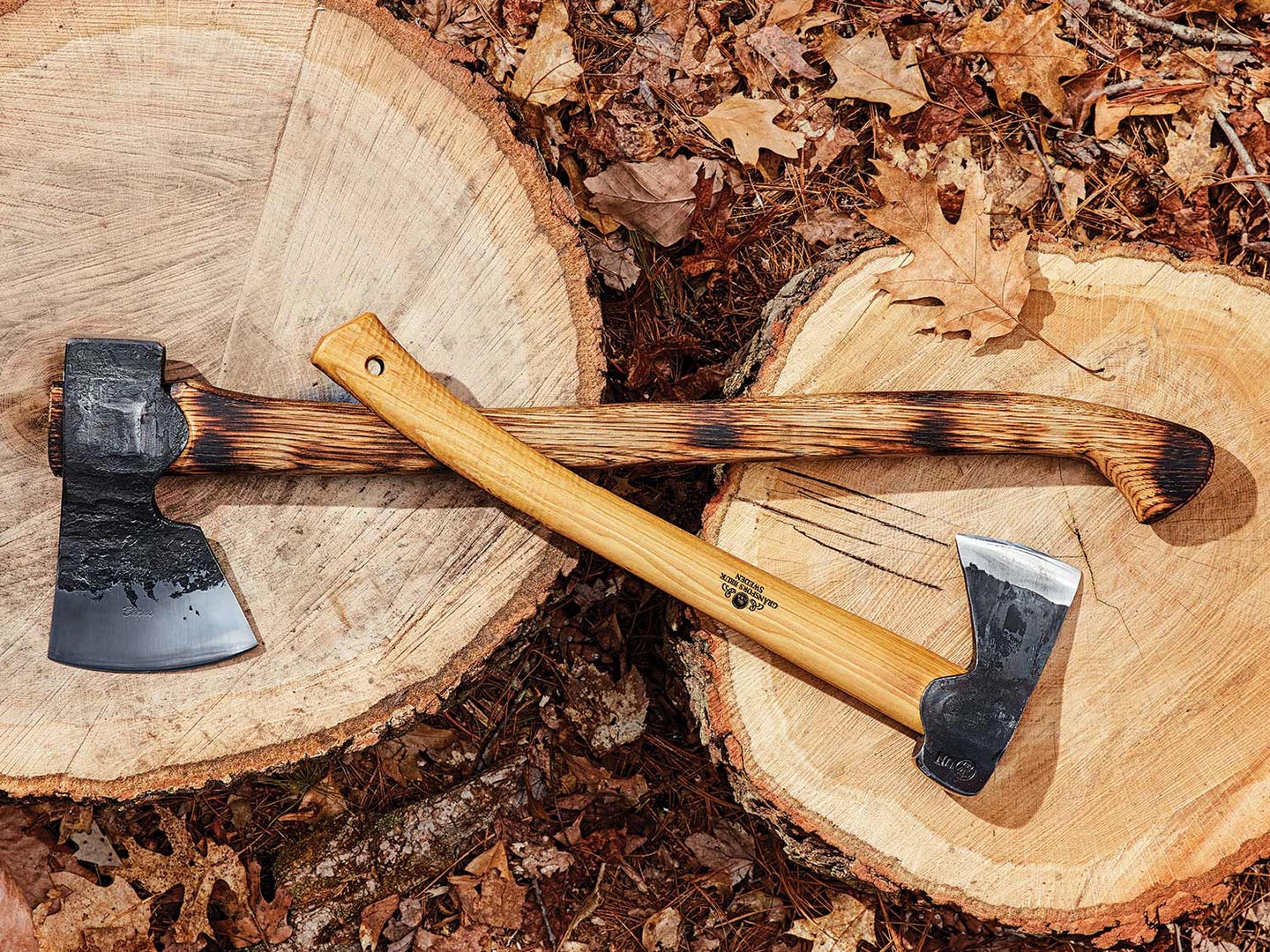 Once upon a time, in what used to be the United States, most households had at least one axe, and everyone in that family knew how to use it. In Maine alone, between 1800 and 1960 there were more than 300 axe manufacturers. Those days are gone, but the axe remains, and we are now engaged in what The New York Times has called an “artisanal ax craze.” Handmade axes are not only useful, they are now trendy.

The craze began in the mid-1990s, when we were introduced to a Swedish axe made by a company called Gränsfors Bruk. These were (and are) axes as they used to be—made by hand, beautifully finished, finely balanced, and sharp as sushi knives. I wrote at the time that a Gränsfors was to a hardware store axe as a Porsche Turbo was to a school bus. When you whacked wood with one, a hunk the size of a Double Whopper with cheese rolled away.

So, you axe, where are we now? Well, we still have ­hardware-store axes. But what if you want something that will really cut? That means artisanal axes, the ones built either by hand, one at a time, or in very limited production. And of those, I’ve not found any better than these four.

The Great Northwoods axe is the product of one man, a Pennsylvania wilderness survival and primitive-skills instructor named Robert Burns, who took up blacksmithing at the age of 13. The axe has a 3 1⁄3-pound head and a 26.5-inch hickory handle, which is toasted with a blowtorch to make the wood harder and give it an antiqued appearance. It falls in size between a camp axe and a felling axe and is meant to be light enough to use one-handed but powerful enough for felling.

The head is Burns’ own design, inspired by Norwegian forest axes. It’s forged with a wide blade and thin cheeks, which give a deep cut. He can make it from a homogeneous piece of 4140 chrome-moly steel or from mild steel folded and forged over a piece of high-carbon 1095. The latter is the old-fashioned way and more labor intensive, but gives it a more durable edge.

I can tell you from experience that Mr. Burns’ axe makes the chips fly, that it feels lighter in the hands than it actually is, and that it can be swung with great accuracy. Burns also makes the best sheath I’ve seen.

Sweden, like the U.S., once had a thriving timber industry and lots of axe makers. Today there are only a few left, but ­Gränsfors Bruk remains among the very best. They make a full line of axes, and the model that caught fire here is the Hunter’s Axe, which is designed to cut wood and to ­disassemble game. It has a 1½-pound head and a 19-inch hickory handle with a spiral groove cut around the butt to give you a better grip when your hands are wet or bloody. While the handle is short for an axe, it’s long enough that you can get two hands on it, which gives you far more leverage and control than you get with a hatchet.

The butt end of this axe’s handle is known as a flay poll (flay being an archaic word for skin). Its corners are rounded, and it is highly polished. This enables you to shove it between hide and meat, and push to separate the two. The flay poll works.

Gränsfors Bruk axe heads are stamped with the initials of the smith who forged them. They’re the only axes I’ve seen that can compete with Brant & Cochran (No. 3) for fit and finish, and they have a 20-year warranty.

When B&C introduced the Allagash Cruiser five years ago, they became the one and only company, in some 60 years, to produce a handmade axe in Maine, which was once axe central. The Cruiser is made on a pattern called the Maine wedge. The 2½-pound head is forged from 1050 steel and quenched in the salt water of Casco Bay. The 28-inch hickory handle is turned by the Amish, and the leather sheath is also made right heah in Maine.

Cruiser comes from “timber cruiser.” During the heyday of the logging industry, timber cruisers were highly skilled individuals who surveyed the forests for cuttable trees. When they found one, they’d chop a blaze in its trunk with a smallish axe. The Allagash is one of Maine’s big rivers, in which I dumped my canoe six decades ago.

Allagash Cruisers are small enough to be handy and portable, yet big enough to fell a tree should the need arise. I’ve watched them being made from start to finish and, considering how much work goes into them, I don’t see how B&C manages to charge so little. They are lovely axes; there’s no other word.

Read Next: Five Timbercraft Skills Every Outdoorsman Should Master

Another Swedish company, Hults Bruk has been forging away since 1697. The Dave Canterbury American Felling Axe was designed for them by the blacksmith and survivalist whose name it bears. It’s a full-size felling axe with a 3½-pound single-bit head built on the Montreal pattern and a 32-inch straight hickory handle. (Just about all single-bit handles are curved, so why straight? Because while curved gives you more leverage and velocity, straight gives you more control and accuracy.)

Hults Bruk makes a wide variety of axes, and the ones I’ve examined are not as nicely finished as Gränsfors or the B&C. On the other hand, they are about as fine as you can get when it comes to chopping. They’re sharp as razors and built for ­serious work. The Dave Canterbury is a fearsome cutting tool, and when you swing it, big things happen. Like Gränsfors, Hults Bruk is not short on dealers, but this axe seems to be in limited supply, so scout the internet. (It’s worth noting here that this company’s website has a well done and informative blog for anyone ­interested in axes.)

Swinging an axe is very hard work. Prizefighters used to do it as part of their training. E. e. Cummings had a stroke while splitting firewood and died shortly thereafter. If you are a major American poet, or are in lousy shape, take it easy.

Long ago, there were plenty of people around who could show you the art of axery. Not any more; you’ll have to get it from a book, and the bible is The Ax Book, by D. Cook. It contains an almost inconceivable amount of information. Or you can not buy it and console yourself with the thought that surgeons are much better at re-attaching fingers and toes than they used to be.

If you want to chop, get an axe. If you want to buck wood (reduce a log to stove-sized lengths), get a chainsaw. If you want to split wood, get a splitting maul. By buying the most efficient tool for each job, you’ll save yourself vast quantities of sweat.

If you do chop off a few digits, put them in a plastic bag along with some milk to keep them moist and have someone drive you to the hospital. Avoid excessive screaming. No one wants to listen to that.

Axe Central is a company called Boundary Waters. They carry all manner of fine and intermediate-priced axes, plus accessories, and are nice folks to deal with.

How to Have an Axe Restored

There were hundreds of thousands of axes (more likely millions) made between 1800 and 1960, ranging in quality from cheap and disposable to superb. They suffered, almost uniformly, from neglect, abuse, and ruinous sharpening. Once in a while an elderly head survives in good shape and can be cleaned up, re-hung (fitted with a new handle), and re-sharpened, and you’ll have an axe that’s just as fine as it was a century ago, and at a lower price than a comparable new axe.

I have two restored axes. One is a double-bit cruiser, a Zenith-grade made by a company called Marshall-Wells. The other is a double-bit felling axe turned out by a firm named Cayuga, after the lake next to which Cornell University lurks. In both cases, the restoration was done by Brant & Cochran, and there are other artisans out there who will do the same thing.

If you find an axe head that’s stamped Collins, or Plumb, or Mann Edge Tool, or Kelly Tool Works, or Emerson & Stevens, to name a very few, consider having it brought back to life. A first-rate axe in 1919 is still a first-rate axe a century later.

An edited version of this story originally appeared in Field & Stream Vol. 125, No. 2.