Best of Both Worlds 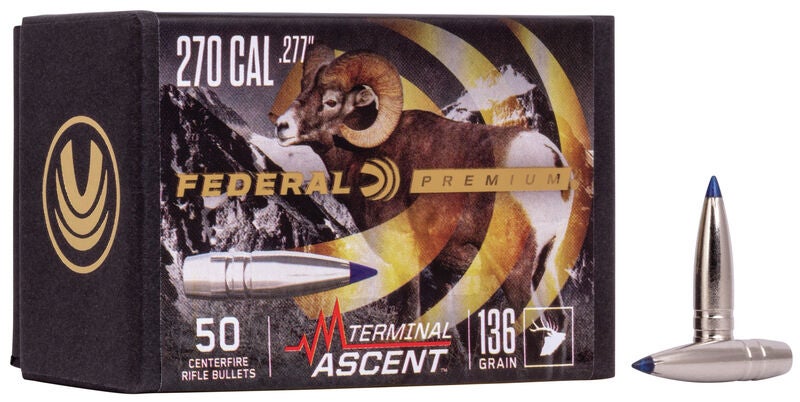 Many ammo companies have the talent and experience to build fast-expanding bullets for hunting big game. And many of these same companies can also create sleek, accurate, match-grade bullets for long-range target shooting. But creating a bullet that can do both is a good deal more complicated. Federal, however, decided that the effort to create just such a product would be worth the effort.

It was a tall order, sure, but the company didn’t exactly start from scratch. Why should it? Not when it had years of experience creating such successful designs as Trophy Bonded Bear Claw, Trophy Bonded Tip, and Edge TLR.

Federal took the lessons learned in developing those time-tested bullets, and then poured all that knowledge and experience into creating what it believes to be its best hunting bullet to date—Terminal Ascent. The new Terminal Ascent blends the features of top match-style bullet designs with the high weight retention, deep penetration, and lethal terminal performance—both up close and at extreme distances—of superior hunting ammo.

The foundation of Terminal Ascent’s performance rests on three pillars: solid-shanked and bonded bullet construction, AccuChannel grooving, and the Slipstream polymer tip. Let’s take a quick look at each.

A bonded bullet has a lead core bonded to the copper jacket around that core. A solid shank means the bullet has a thick, solid copper base at the bottom of the bullet to support that lead core. And this, in turn, means the bullet retains its weight downrange for deep penetration. Furthermore, a large hollow cavity in the bullet nose, along with exterior jacket skiving, further aids expansion and penetration. Such penetration often means the difference between hitting a deer or elk and having it go down or having the wounded animal run off where it can’t be recovered.

Like many versatile bullets, Terminal Ascent features grooving along the shank to improve accuracy across a range of rifles. These grooves also help decrease barrel wear and fouling. But such grooves typically cause aerodynamic drag to the point where the bullet experiences more drop and wind drift while in flight. Federal’s great leap forward here, though, is that its AccuChannel groove technology, accomplished through meticulous experimentation in the number, location, and configuration of the grooves, achieves these goals with only a minimal increase in drag.

The patented polymer Slipstream Tip could be considered Terminal Ascent’s piece de resistance. A small cavity runs the length of the shank all the way up to just below the point itself. That point breaks free upon impact, allowing fluid to enter the hollow core, where it generates pressure and easy expansion, even at low velocities. The Slipstream Tip’s hollow core sets it apart from all other polymer tips on the market—but it’s also unique in its high resistance to the elevated temperatures a bullet experiences during flight.

In addition, Federal engineers incorporated other important features to boost ballistic coefficient (BC), delivering flat trajectories and less wind drift. Finally, Terminal Ascent also features nickel plating that resists corrosion while providing a hunter with ammo that will run smoothly through his rifle. The end result is a package capable of delivering accuracy and reliability both at close ranges (higher velocity) and at long ranges (lower velocity). And since it will expand reliably at even a low velocity of 1,400 fps, the bullet will appeal to hunters using shorter-barrel rifles or hunting with handguns.