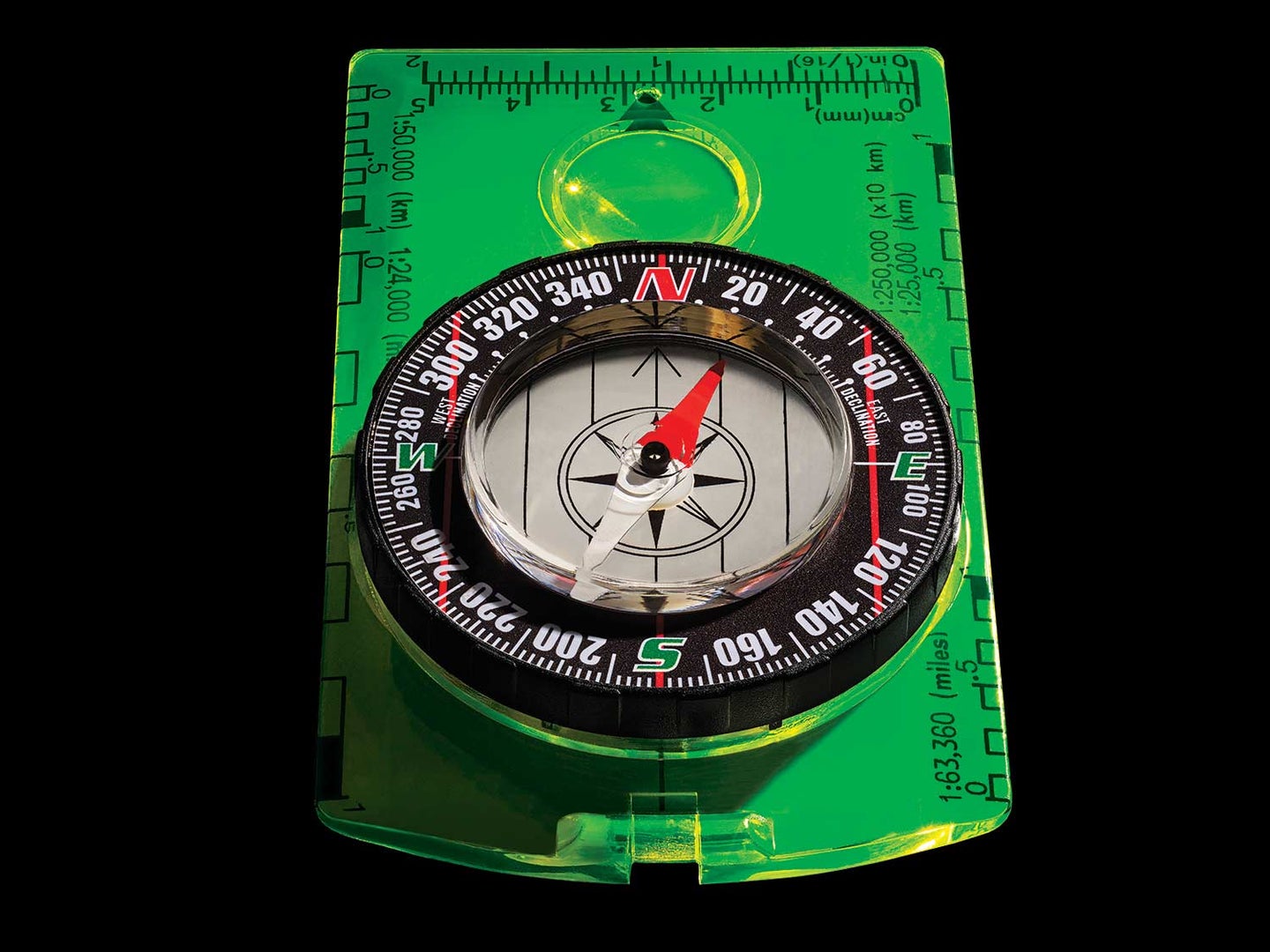 A baseplate compass and topo map will get you back on track—no signal required. Nick Cabrera
SHARE

1. Navigate with a Map and Compass

Triangulation has kept outdoorsfolks found and alive as long as magnetized needles have been pointing north, and it’s still the most effective method of getting unlost that doesn’t involve an orbiting satellite. No matter how discombobulated you are, if you can see two or more fixed landmarks in the distance—a mountain peak, fire lookout, cell tower, or ridgeline gap—you can find your exact position with a map and compass. Of course, there’s the rub: You’d better have a map and compass.

First, adjust the compass for magnetic declination. If you don’t know how, find the declination values listed on a topographic map so you can add or subtract the values from your compass bearings. Next, orient the map so the top edge faces true north. Take a bearing to the first landmark by pointing the compass’ direction-of-travel arrow toward the landmark and turn the compass dial until the magnetized needle is inside the red orienteering arrow. Lay the compass flat on the map so that the orienting lines are parallel to the map’s north-south lines. Move the compass to place the top corner of one edge directly on the landmark, and draw a line down the edge of the compass along the bearing. You’re somewhere along that line.

2. Call for Help with a Signal Mirror

Long before the era of SIM-card GPS messengers, calling in the cavalry required little more than a shaving mirror and a rudimentary grasp of Morse code. Practically no one can communicate in dots and dashes these days, but you can still make or scavenge a workable signal mirror from just about any shiny surface, and then use it to SOS a search-and-rescue party. Cut open a can and flatten it with a rock. Wrap aluminum foil around a credit card. Pry the rearview mirror off a car. Whatever you use, the real trick is aiming the flash. Here’s how it’s done.

It you’re signaling a moving object, such as an airplane or a hiker on a distant ridge, you’ll want your flash to move with the target. Hold the signal mirror in one hand, and extend the other toward the target, palm toward you, and form a V between your index and middle fingers. That’s your buckhorn rear sight. Place your target in the V and move the mirror so the sun’s reflection moves up the V and directly onto the target.

If you are trying to flash a stationary object, such as a distant farmhouse, stand so that the target is in a straight line between the top of the mirror and an aiming stake, such as a broken sapling or a stake driven into the ground. When you flash sunlight on top of the aiming stake, it will blink on your target at the same time. Cue the helicopters. —T.E.N.

3. Live to Tell the Tale

My closest call in 40 years of wilderness travel came about—not surprisingly—on a Field & Stream assignment in Alaska. My buddies and I were on a 10-day float of a remote section of the Kipchuk River. We were enamored of paddling water that rarely, if ever, saw a canoe. We’d flown in via multiple trips in a tiny Piper Cub and landed beside a tundra river that whipped back and forth through braided, scoured gravel bars. On one hairpin curve, photographer Colby Lysne and I fought the current but careened into a giant sweeper—a downed tree whose canopy limbs and branches were buried under roaring current.

Swept into a wall of trees, the heavily laden canoe went broadside to the river, then heeled over with a jerk. The heavy water pulled me under. I caught a submerged tree trunk square in the chest, and clamped an arm around the slick trunk, tasting fear and chipped teeth.

I clung to the branch—3 or 10 feet underwater, I couldn’t tell you—as the current sucked at me, pulling my body taut like a flag in a hurricane. After a dazed moment, I realized that letting go could mean near-­certain death. I had to crawl hand-over-hand along the branch, climbing the tree in reverse, to have a chance at reaching the river­bank. At one point my hand slipped, and I was left dangling by one arm as the current whipped me back and forth. I clamped my other arm around the trunk, lungs bursting, my brain going black, and then the top of my right wading boot dragged on gravel.

In my office, there’s a stone I picked up from that Alaska gravel bar while I was still puking river water and lying facedown in the rocks. I pick it up every now and then and think back on the lessons learned from that chilling episode.There’s no question I learned the value of not giving up, and of fighting in a life-or-death situation until you live or die trying. But perhaps as importantly, I learned how quickly things can go from pretty awesome to really, really bad. I learned that even when you’re in your element—I’m an experienced wilderness paddler—the elements hold a stacked deck. Since then I’ve found myself in the middle of nowhere any number of times, and my pals will tease me for what they consider a touch of timidity and little stomach for taking big chances.

But once upon a time I found myself where no one could hear me scream, where no one could lend a hand. I’m thankful I had what it took to climb out of that watery hole, but I’d rather not face that test again. I’ve learned to walk slow and think twice. In big wilderness, the best chances to take are the little ones. I still might one day be swept downstream or croak in a swarm of killer bees. But I won’t die of arrogance. —T.E.N.

4. Learn How to Snare a Rabbit

after we read Richard Connell’s classic survival story The Most Dangerous Game in junior high school English class, I became obsessed with the idea of pit-trapping rabbits in the woods. In the story, a shipwrecked American named Sanger Rainsford is hunted by a psychotic Russian named Zaroff, and at one point (spoiler alert), Rainsford digs a deep Burmese tiger trap that winds up killing ­Zaroff’s dog. I can’t remember what grade I made in that English class, but I do know that I spent days drawing diagrams of Malay man-catchers and bent-over saplings armed with knives lashed to their tips. And I riddled 40 acres of woods with bunny-size pits lined with sticks I had whittled sharp and camouflaged with springy pine boughs.

Small-game snaring is a fundamental tool in the survival kit, but bear in mind that snaring is highly regulated and unlawful in most scenarios. Use this technique only in a true survival situation. Cut a 2-foot length of solid (not braided) wire. Make a ½-inch-diameter eye by forming a 180-degree bend 3 inches from one end and twisting the tag end of the wire a half-dozen times around the running end. Pass the running end through the eye to form a fist-size loop.

Set the snare vertically in a well-used rabbit trail. Secure the long end of the wire with a few loops around a sapling beside the trail or to a stout stick driven into the ground. Twist the snare wire three or four times to put it under tension and give it added spring for a quicker deployment. Use short sticks driven into the ground beside the loop to hold it in place. Snaring is a numbers game, so the trick is to set as many as you can. —T.E.N.

When the daylight and air temperatures fall and you don’t have a fire-starting trick up your sleeve, you’d better know how to make a tinder bundle. It’s an old-fashioned trick that’s so old, you may not even know how to start.

A tinder bundle is not the wimpy little pile of pine needles I usually use to start a fire with when I’m too lazy to step it up. It’s a multilayered, ­grapefruit-size mass of dry fibrous materials—grasses, pine needles, bark—roughed up by rolling the stuff in your hands, and then shaping it into a bird’s nest with a depression in the middle that will protect the tiniest spark from fire-snuffing breezes. You line the depression with the finest, hair-thin materials you can get your hands on, and that’s where you aim your spark or set your match. When the interior sparks to an ember or flame, you fold the bundle gently in half so the infant coal roars to life. You now have a double handful of ­yellow-­flamed inferno, ready to place under a ­tepee of dry sticks.

No tricks. Nothing from the store. This skill is an art nearly as old as the campfire itself. —T.E.N.

The Doan Magnesium Fire Starter was invented in 1973 by an outdoorsman named Sol Levenson, who came up with the idea while on a trip to South America. You scrape tiny shavings from the solid block of magnesium, to which a sparking rod is attached. When you strike the spine of a knife, sparks ignite the shavings for a blistering 5,400-­degree burn. That’s hot enough to light oil-soaked rags and strips of thin rubber, not to mention wood shavings.

Adopted by U.S. armed forces and issued in the survival packs of F-16 fighter pilots, the Doan Magnesium Fire Starter spawned a mini industry of knockoffs. Some are good, others are cheap imitations with wimpy materials. But thankfully, the original is still available. —T.E.N.