(Editor’s note: This is the second of a three-post series about the Yellowstone River, the longest undammed river and one... 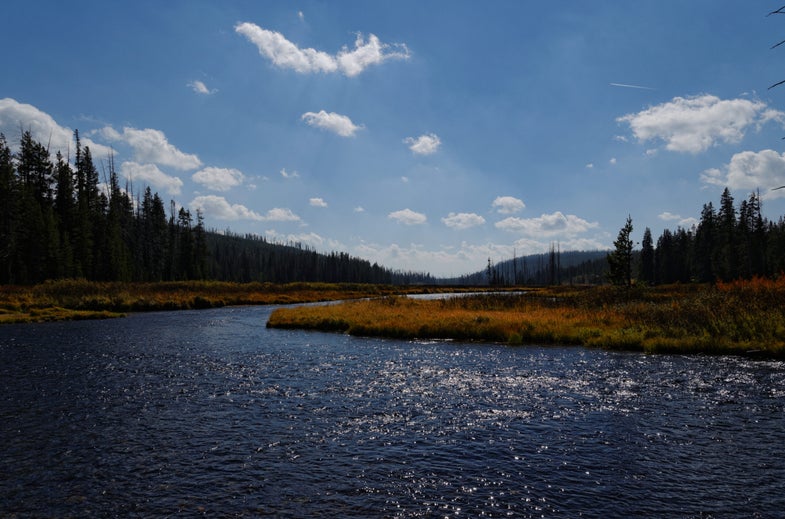 Partial blockages and diversions along the Yellowstone have caused lasting environmental impacts.. Courtesy of Flickr/Philliz88
SHARE

(Editor’s note: This is the second of a three-post series about the Yellowstone River, the longest undammed river and one of the best wild trout fisheries in the continental U.S. Read the first post in the series here.)

After the high water years of 1996 and 1997 (they were actually the first normal snowpack years we’d had in Montana since the epic wildfires of 1988- the burned mountains allowed that snowpack to melt away in near-record time, flooding the valleys), landowners along the Yellowstone sought to safeguard their properties by engaging what would come to be called “riprap anarchy” – using boulders and other debris to stabilize eroding banks that threatened pastures, hay fields, and homes that had been built too close to the river during the past decade of low flows. The river, confined between the rocks and unable to spread out over the land, acted as a firehose, scouring its own bed, blowing away fish cover and spawning beds, and becoming something new—a swift deep channel that supported little aquatic life.

Although some changes have been made in the way the U.S. Army Corps of Engineers issues permits to riprap banks, development, and the need to protect it with riprap that destroys the ecological processes of the river, continues unabated, as anyone who has fished the Paradise Valley sections of the Yellowstone can attest. Bills to prohibit new homes within 225 feet of the riverbank- spawned in part by the known effects on rivers of septic tanks in floodplains, and by the floods of 1997—when local firefighters had to burn a 4200-square-foot mansion that was toppling into the raging Yellowstone and would have jammed against a downstream bridge—have failed. It can never be said that we did not know the practical science involved in properly stewarding the upper Yellowstone, nor can we say that we had no choice but to let it be ruined. (Lest you think that all is lost, ponder what could have been, without a ferocious opposition by fishermen and landowners: From the 1950s through the 1970s, multiple proposals were made to actually dam the Yellowstone upstream from the town of Livingston and flood much of Paradise Valley.

As the famous coldwater trout fishing gives way to what should be a world-class warmwater fishery below the mouth of the Boulder River at Big Timber and on toward Billings, we see the true costs of how we have, and are, treating the river. The poster child for a near century of disregard is, of course, the pallid sturgeon, firmly planted on the federal endangered species list since 1990, with less than 100 of the ancient bottom dwellers estimated to be surviving in the Yellowstone (and most of these are known to be around 60 years old). But the pallid sturgeon is only a canary in the coal mine of the Yellowstone watershed. Its troubles are a microcosm of those that affect the entire river. It is often said that the Yellowstone is the longest undammed river in the U.S., and technically, this is true. But, due to the extreme demands for irrigation water in this arid part of the West, six diversion dams partially block the river between Billings and Sydney, Montana, delivering over 1.5 million acre feet of water to local farms and ranches. These dams, all of them built in the early decades of the 20th century, when fisheries and the health of the river were not considered, block the passage of fish trying to move upriver and into the various tributaries to spawn. In addition, according to this excellent story from a 2005 issue of Montana Outdoors, “Each year tens of thousands of sauger take an ill-fated detour into canals siphoning water from the Yellowstone. These smaller cousins to walleyes are then either pumped out into fields along with irrigation water or left stranded in the ditches.”

Until recently, the biggest diversion dam of all, called Intake (famous for the giant paddlefish caught there during high water every spring) and located near the town of Glendive, was estimated to have siphoned away over 500,000 fish per year, wasting a wide assortment of any of the 33 native species in the river, everything from walleye and sauger to paddlefish and pallid sturgeon. In 2011, huge screens were placed over the Intake diversion to cut down on the number of fish “entrained” (lost in the irrigation system) and in 2013, more were added to diversions near Miles City.

The screens (which irrigators say are more about keeping the algae and moss from clogging irrigation pumps than they are about saving fish, although it is doubtful that the screens would have been built fish-friendly without the presence of the pallid sturgeon, and the potential iron fist of the Endangered Species Act hovering overhead) will help keep some fish in the river, but they do not address the problem of the dams blocking spawning habitat.

That problem, too, has a solution, and a model is already in place, even if it took one man almost 44 years of fighting and cajoling to get it done. At the T-Y Diversion (Tongue-Yellowstone) near Miles City, Roger Muggli, a farmer, feed mill owner, and irrigation district manager, is responsible for the creation of the Muggli Fish Passage, a 760-foot long channel around the Twelve Mile Irrigation Dam on the Tongue River that allows fish in the Yellowstone to access over 50 miles of spawning and other habitat in the Tongue River watershed. Muggli follows his father and grandfather as manager of the T-Y Irrigation District and has been committed to the fisheries on his home rivers since he was eight years old and picking up fish stranded in his family’s irrigated farm fields and racing to the river to throw them in. Speaking of the Fish Passage that was completed and opened in 2008, Muggli said, “I had people tell me, most of my life, that this would never happen, that it was a waste of my time.” The Tongue River had been blocked by the Twelve Mile dam since its construction in 1886, and it has lost an estimated 20 of the 40 or so species of fish that once lived in it. But the Fish Passage is bringing it back while charging the main Yellowstone with untold numbers of game and forage fish from the healthier Tongue.

Right now, there is a tremendous battle shaping up around what, exactly, to do about Intake, by far the largest diversion dam on the Yellowstone, responsible for watering 55,000 acres of thirsty cropland near Glendive. A lawsuit from environmental groups that claims a new dam project at Intake will further endanger the last of the pallid sturgeon in the river has prompted a federal judge to order new studies of the project and its alternatives. U.S. District Court Judge Brian Morris said in a ruling that “Federal Defendants cannot avoid an EIS simply on the basis that the proposed Project would be ‘less bad’ than their historical action. “Federal Defendants do not deny that they have failed to analyze whether the new weir would prevent pallid sturgeon recovery, or whether the bypass channel would allow for the establishment of a viable population of pallid sturgeon. It appears that (the National Environmental Policy Act) requires Federal Defendants to conduct this analysis.”

No one is proposing any cutback on the delivery of Yellowstone waters to the irrigation district—the region’s economy is built around the water. The argument is over how to deliver those acre-feet and still protect or try to restore a fishery that includes the endangered pallid sturgeon. Most conservationists agree that the best solution is to remove the existing dilapidated diversion structure that blocks the movement of fish upstream in all but the highest water and to use a system of screened pumps in the river to deliver the irrigation water. But the U.S. Army Corps of Engineers has its own ideas about how to fix Intake, and their solution involves building a two-mile-long bypass channel and a new, much larger concrete diversion dam. Although the much shorter Muggli Fish Passage was the best solution available for the T-Y, there seems to be little scientific evidence that a much longer fish passage, with a huge new dam, is the best solution on the main Yellowstone.

Scott Bosse, of the conservation group American Rivers (which is not part of the lawsuit against the new dam), says that the Intake dam and bypass project is simply a “$57 million roll of the dice” with no guarantee that it will address the fisheries issues. “Savage Rapids Dam on the Rogue River, they removed the dam and used the pumps. Red Bluff Dam on the Sacramento River, they keep the floodgates open (so fish can pass through) and use the pumps. Both of those projects meet the needs of fish and farmers, both. But at Intake, we’re building an immovable concrete monolith for irrigation, using taxpayer money that was specifically allocated for fisheries recovery. This is as much a taxpayer question as it is an endangered fish question. And if it does not work, there’s no more money left to try and fix it.”

Once again, the conflict is being framed as “endangered fish (pallid sturgeon) versus hardworking farmers” when the truth is that the current irrigation needs of the farms and ranches can be met while also restoring the river as much as possible, recovering the fishery—not just pallid sturgeon, but game fish, channel cats, forage fish, the unique blue suckers native here, and the paddlefish, another entire economy, both recreation and healthy eating for Montana families—we once let over 10,000 five fish limits of sauger disappear into the black hole of Intake’s canals and ditches, every year, without batting an eye. Although tens of thousands of fish are still disappearing into irrigation withdrawals along the Yellowstone and other rivers in Montana, times have changed. Fish and fishing are valuable, quantifiable parts of our economy, just as are corn and sugar beets, and a functioning river underlies the private property values of landowners all along it. What is most sad in this conflict is that we have to have the Endangered Species Act to force us to try and fix a problem that we should have been rushing to fix, for all of our own good, a long time ago.

(Next: How ruptured oil pipelines running under the Yellowstone have damaged the river, the land, and residents.)