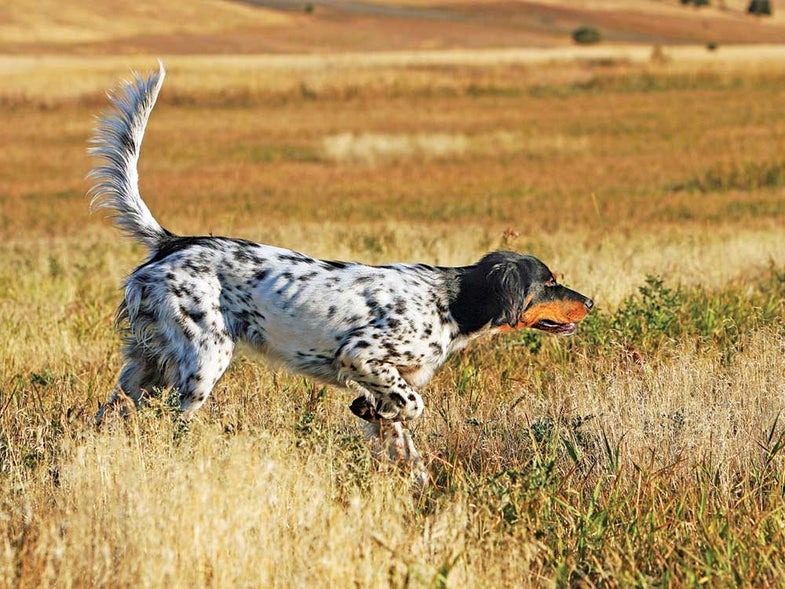 Perfect Form
During training sessions, an adult dog should hold a point for one minute. John Herr/Images on the Wildside
SHARE

Every opening day, California bird guide and gun-dog trainer Louie Tavares watches overweight and out-of-practice pointers hit the field. “It’s the biggest problem I see, all September long,” Tavares says. “Lots of guys don’t think to work their dogs ahead of time, and they run out of gas on the first few hunts.” Tavares swears by the following diet, exercise, and steadiness routine to get a gun dog in shape for the fall opener.

Like a lot of other gun-dog trainers, Tavares says he feeds his dogs cheaper food during the off-season. “But a month before opening day, I upgrade to high-protein chow,” he adds. More protein means more energy in the uplands. It helps muscle development and can boost your dog’s immune system. There are gun-dog-specific formulas on the market that pack the necessary punch. Tavares recommends Iams Sporting 29/18.

Without exercise, heavyweight food will make a heavyweight dog. “I run my dogs three times a week no more than a half hour at a time,” Tavares says. “Any more and you’ll tire the dog out, especially at the beginning.” Stay mindful of the late summer weather, as it’s easy to overheat an out-of-shape dog. If it’s especially hot, Tavares switches to water retrieves. “Even if the dog doesn’t like water, if he’s hot and tired and panting he’s more than willing to jump in.”

To check his dogs’ steadiness, Tavares takes them on a preseason test run. He hides a dummy laced with pheasant scent in high grass, then lets his dog work the field on a 30-foot check cord. “When the dog hits the bird, hold him tight and give him the whoa command until he’s steady,” he says. “If he breaks point, grab him by the collar, put him back in the same spot, and keep on the whoa command until he’s steady.” Five seconds is long enough for a puppy. Older dogs last a minute.