8 Survival Knives That Might Help You Win A Bear Fight 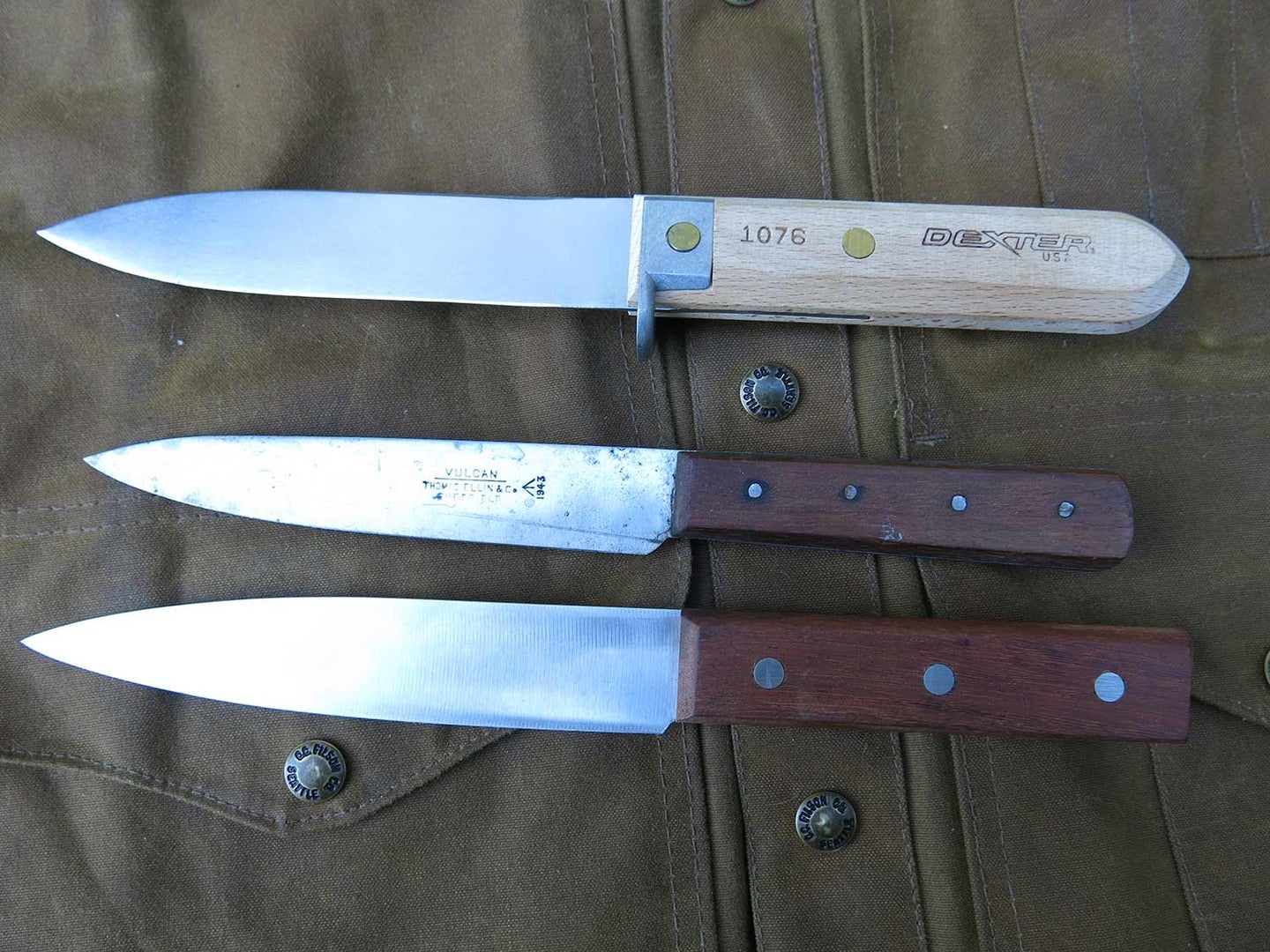 It’s a regular topic on many outdoor forums and blogs, “What knife do I carry to defend myself against bears?” Like every experienced outdoorsman, I want to just say, “Carry pepper spray or a firearm.” Okay, I understand there a lot of reasons why a person may not be carrying either when they actually need it most. A knife can also have many other utilitarian uses, so maybe, just maybe, the average person is more likely to have one with them when they need it. Then, just about the time I convince myself that this knives-against-bears thing is a total fantasy, someone actually fends off a bear with a knife! And often, it’s with a blade that would seem to be completely inadequate for anything tougher than whittling a stick in camp.

For the record, I’m a trained forester and spent the first 10 years of my career working for a large timber company in Washington state. Often that meant following a compass line on foot through the wilderness. Our area has healthy populations of both cougar and black bear, but I can’t say I (or my company) ever worried much about my safety. On those rare occasions when I saw either, they were always headed the other way at high speed.

The standard Hollywood version of a bear attack has the bruin on its hind legs, swinging its front paws like a clumsy boxer. Our hero then meets him face-to-face and usually settles the matter by planting a large Bowie knife in the bear’s chest. Real-life bear attacks (and this covers both black and grizzly) are usually sudden, unexpected rushes from cover with the victim on the ground before they even know they are in danger. Reading accounts of these attacks has lead me to conclude about the only defensive tactic you have at that point is to feed one arm to the bear while trying to use whatever weapon you have available with the other. What you never want is for the bear to seize you by the head.

Perhaps the most classic tale of knife-versus-apex predator is that of South African game ranger Harry Wolhuter in 1903. While patrolling the Kruger Wildlife Reserve, he was riding alone in the dark toward a water hole to camp for the night. An African lion suddenly sprung out and pulled him from his horse. With no other option, Wolhuter drew a plain European-style, single-edge butcher’s sticking knife from his belt sheath and stabbed the lion several times behind the shoulder in the general area of the heart. The lion released him, stumbled a few feet, and died.

I’ve been to Kruger National Park and have seen both the knife and the hide of the lion on display. The blade is 6-inches in length with a simple, guard-less wood handle—about the last knife I would want to tackle a lion with. Bottom line? Under those circumstances—bear or lion—you do what you have to do.

Finding someone with practical experience of intentionally fighting bears with knives is next to impossible. Probably the closest skill is those hunters who kill wild boars with cold steel. Hogs, as a rule, run a little smaller than an adult bear, but no one doubts their toughness. One experienced boar hunter I know once gave me his views on fighting off a bear attack with a knife. He told me that for him, something with around an 8-inch blade, preferably double-edged, seemed to work best on hogs. The knife needed to be plunged to the hilt behind the shoulder and pumped as much as possible to enlarge the wound before withdrawing and stabbing again. In his opinion, this would probably be your best chance with a bear, too.

The knives I would intentionally carry for going hand to claw with a bear are not going to be my normal choices for hunting or camping. There are, however, a number of knives on the market that were designed for boar hunting that might make reasonable choices for the task.

A pair of New Zealand Svord-brand pig-sticking knives. These might be a little short but, unlike some of these blades, they could be used for other tasks. Steven Dick

When you start researching hog knives, you quickly find the center of this sporting pursuit focuses on Australia and New Zealand. While there are a number of locally produced hog-sticking knives in that part of the world, the brand most commonly found in the U.S. is the New Zealand-made Svord. The company offers several boar sticking models, but the most common ones feature a single edge, spear-point blade that’s 6.5 to 7 inches in length. I tend to think of these as being on the bottom end of the size scale for defensive bear blades, but this is one general design I can see having some actual utility uses in the field. Prices run in the $50 to $100 range. Most Svord models are available on Amazon.

I also found the German F. Dick ErgoGrip Butcher’s Sticker to be highly popular with Australian and New Zealand hog hunters. This double-edged dagger blade is a full 8.5-inches long on a high-visibility blue plastic handle. In Australia and New Zealand, sporting goods retailers often sell the knife complete with a leather sheath. That doesn’t seem to be true in the U.S., but http://knifemerchant.com// offers the knife at a very reasonable $46.25. At that price, it might be worth looking for a custom sheath to go with it.

Another model that seems to be popular in Australia and New Zealand is marketed by Mossy Oak. While I would like it more if the false edge was actually sharpened, the 8.5-inch spear point blade looks like it should have potential and it comes with a heavy leather sheath. The handle is green rubber over a full tang. The price is also reasonable on Amazon at about $20.

Read Next: 4 Wickedly Big Knives for Survival, Butchering, and Bushwhacking

As the name indicates, the Condor Tool and Knife “Boar Dagger” was designed for hog hunting. This fully double-edged 420 stainless steel blade is 7.6-inches in length on an ergonomic Santoprene handle. Given we are probably talking about knives carried as backup weapons, I found the 7-ounce weight especially attractive. Like all CT&K models, the Boar Dagger is made in El Salvador. MSRP runs around $65. (www.condortk.com)

With the necessary length, a double-edge blade, and a very secure handle, Cold Steel’s OSS model (right) would be one of my top choices as a bear knife. The Tai Pan dagger (bottom) it would be a close runner up on my list. Steven Dick

Cold Steel has a couple of knives I think have serious potential as bear defense blades. I especially like the “OSS” for a couple of reasons. First, the double-edge blade is a practical 8.25-inches in length. The second reason is the small sub-hilt on the handle would make it easier to hold in a desperate situation. Though it lacks the sub-hilt, I also like the Tai Pan Dagger. Its wide 7.5-inch double-edge blade would certainly create a serious wound when used with determination.

The Spanish have a very long tradition of carrying wide double-edge daggers for boar hunting that should have equal value as defensive bear weapons. The Joker brand CC108 “Colmillo” (tusk or fang) I got from Amazon features an 8-5/8-inch long by 1-3/4-inch wide double-edge dagger blade with a very roomy stag horn hilt. The sheath is made of excellent heavy leather. This is actually one of the smaller Spanish boar knives I’ve seen, but if this isn’t adequate for a bear, we have problem. Amazon’s price runs about $112.

While Top Knives Wild Pig Hunter is single edged, it is both reasonably long and pointy. This is one knife I would also be willing to consider for normal field utility. Steven Dick

Completely American made, TOPS Knives Wild Pig Hunter features custom made spear pointed ¼-inch thick 7.5-inch blade of basic 1095 carbon steel on a Micarta handle. While the knife is single rather than double-edged, the blade does offer an acute thrusting point. It is also one of those knives that might have some field utility besides bear defense.

One last knife that I think has the potential for actually serving for both field utility and bear defense is the Winkler Recon. Frankly, the Recon is probably a little on the short side, but the single edge, 6-inch blade is nice and pointy. Actually getting to your knife will probably be half the battle with a bear chewing on assorted parts of you, but the leather-covered Kydex sheath is designed for multiple carry and mounting systems, so you’ll have plenty of options. ($400, www.winklerknives.com)

So is carrying a knife for bear defense realistic? I can certainly think of ways I would rather approach this problem, but I know there are times and places where better options may not be available. For instance, you can’t fly with bear spray in your checked luggage, and taking a handgun into Canada is totally prohibited. That might leave a large knife as your only solution. Fight and don’t give up.