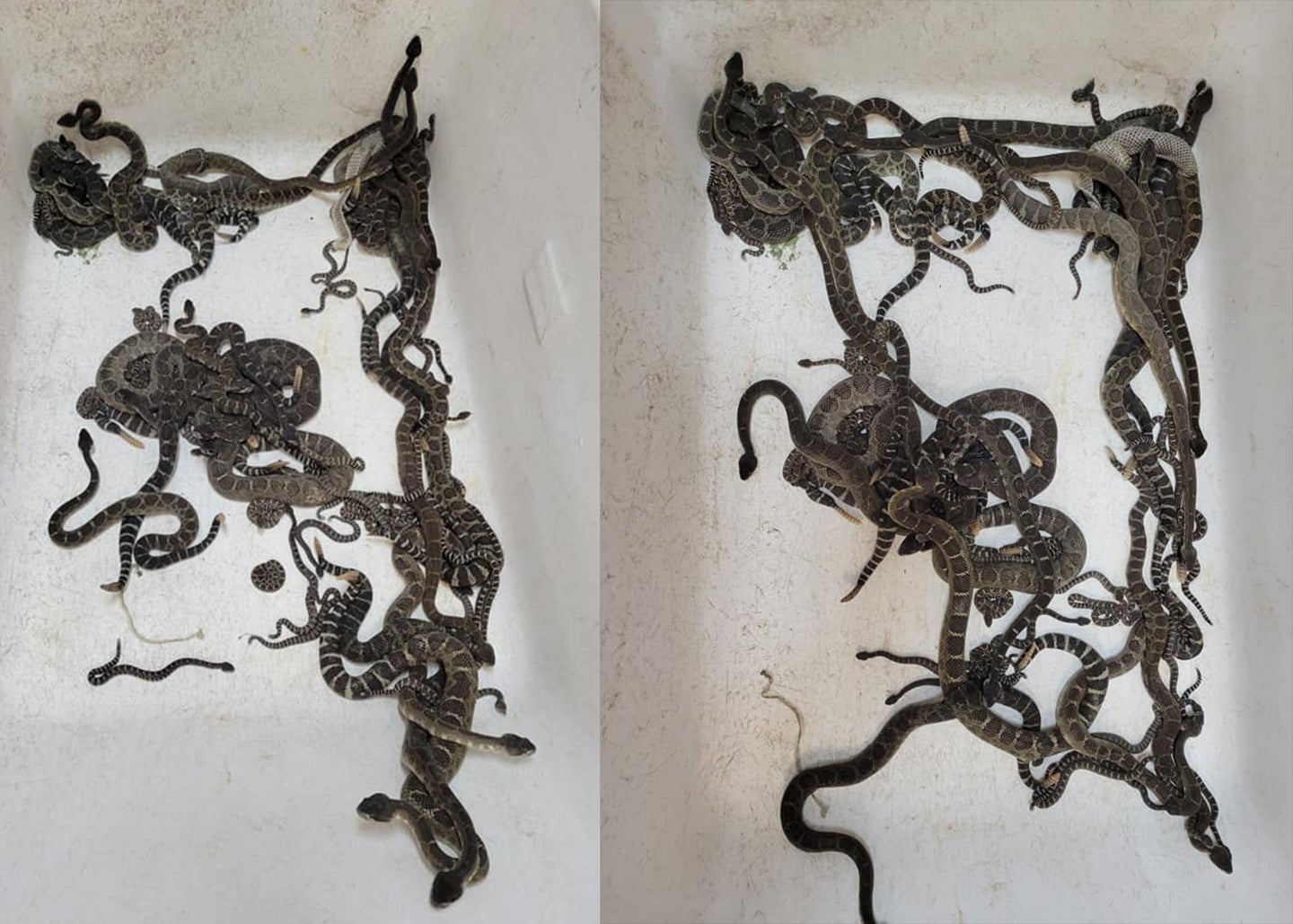 You probably don’t want to read this article if you’re scared of snakes. On October 2, Al Wolf, the director of the Sonoma County Reptile Rescue, received a call from a woman in Santa Rosa, California, who said she had seen a couple of snakes slither beneath her home. When Wolf crawled under the house he immediately found the snake. And then another. And another…

“I kept finding snakes for the next almost four hours,” Wolf told the Associated Press. “I thought ‘oh, good, it was a worthwhile call.’”

Wolf ended up pulling nearly 100 Northern Pacific rattlesnakes—the only venomous snake in Northern California—from the site. Using a 2-foot snake pole, two buckets, and safety gloves, Wolf removed 22 adult rattlesnakes and 59 babies from beneath the home, which is nestled in the Mayacamas Mountains. In two follow-up visits, he collected an additional 11 snakes. He also retrieved a dead cat and a dead opossum.

Wolf, who has been rescuing reptiles for 32 years, said it’s the largest number of snakes he’s ever seen in one place. He identified the Santa Rosa crawlspace as a “den site” because of the high numbers of babies and females. In the fall, rattlesnakes typically seek rocks and other warm places to hibernate in. The homeowners in Santa Rosa told Wolf they didn’t remove any rocks when they built the house, which likely made it an ideal winter haven for rattlers. During the removal, Wolf flipped over more than 200 rocks.

Wolf told Fox KTVU that despite hours on his belly in the dirt, handling the dozens of snakes was a pleasure. “Damn, one house [to have] that many…I started getting happier and happier,” Wolf recounted. “I started thinking, ‘I wish this happened every day.’”

Read Next: What’s the Deadliest Snake in the World?

Sometimes ranchers request that Wolf release snakes on their land for pest control, but he mostly releases the rattlesnakes in the wild “away from people and private property,” he said. “It’s a beautiful animal. It belongs out there.”

Wolf plans to return to the house again before the end of the month to see if any additional rattlesnakes have tried to make a den there.