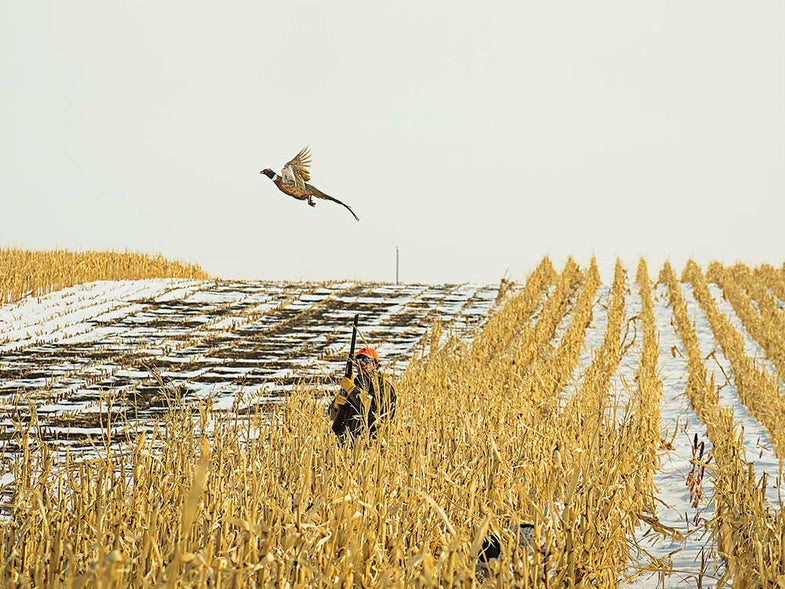 Always go on the last day. It’s one of my rules, and it goes double when the last day of the season is as cold as this one. Nothing puts the brakes on running pheasants like hard weather.

The only problem is that for the first 20 minutes of a late-season hunt, my fingers are too weak and numb to push off a safety. They throb for a few endless minutes as the blood starts pumping. It’s excruciating, but a small price to pay for the best hunting of the year.

Once my hands return to normal, we start looking for birds in earnest. My German shorthair, Jed, is unfazed by cold. Constant motion keeps him warm. Except now he’s frozen—but in the right way, on point in front of a snow-covered deadfall. Kicking the branches, I hear rustling inside, and Jed breaks to dive under the brush. It’s not classic dog work, but it’s effective. A rooster bursts out the far side. It gets out to 20 yards before I decide it’s far enough to shoot without tearing it up.

Conventional wisdom says late-­season hunting means long shots and tight chokes because educated birds will flush wild. I don’t subscribe to that theory, and I leave the same IC/Improved Modified chokes in my gun all year. Cold temperatures force birds to seek out thermal cover—heavy grasses, marshes, brush, deadfalls—and once there, they’re loath to leave. What’s more, with most crops down, that cover is easy to find now. Pheasants that were spread out and hard to locate only several weeks ago are now concentrated in the thickest remaining patches.

Hunting by myself over a pointing dog, I see late-season birds either sit tight like the one I just shot, or gather in flocks with so many alert eyes and ears that they’re practically unapproachable. The best tactic for wild-flushing flocks is to pass on the long shots, mark the roosters down, then hunt them up like singles from a quail covey. Often they’ll sit tight after that first wild flush.

The same cold that initially robs my fingers of feeling saps energy from shotshells, too. Because cold temperatures inhibit chemical reactions, a shell might lose 75 fps on a bitter day. Add to that the fact that cold, dense air gives more resistance to pellets in flight, and your shells lose significant punch. Smart hunters compensate with more velocity, bigger shot, or both. Since adding velocity opens patterns and adds recoil, I’m simply going with 4s (11⁄4 ounces at 1330 fps) in place of the usual 6s.

For all the reasons above, you want a 12-gauge for the late season, ideally one of medium weight—heavy enough to handle a longer crossing shot and light enough to point quickly at close-flushing birds. The extra capacity of an autoloader can come in handy, too, when you run into a flock. My gun is a 12-gauge Beretta 687 o/u with 28-inch barrels. At a little over 71⁄4 pounds, it’s heavier than I’d like. On paper, the 6-pound 12-ounce Benelli Montefeltro autoloader I left at home would have been a better choice. But I shoot the Beretta best, and who wants to bring anything but their A game to the final hunt of the year?

Read Next: Why There’s Nothing Quite Like a Late Season Pheasant Hunt

At day’s end, my philosophy on wild flushers pays off. We hunt until there’s only one spot left for birds to be, a giant pile of cleared trunks in a cornfield waterway. Before Jed gets halfway across the field, pheasants stream out of the brushpile toward the property line. Most fly to where I can’t hunt. But a few stop short. I make a swing to get the wind into Jed’s face, and working down the fenceline, he stops. The rooster comes up at my feet. I push the muzzle toward the bird as the stock comes to my face, and the last pheasant of the season falls into the snow.

A hundred bucks isn’t much these days, and it’s exactly one penny more than the price of the exceedingly reasonable Caldwell Precision Chronograph, which is very handy for testing shotshell reloads. It’s accurate, it works, and it’s simple. You can splurge for the Premium Kit ($160), with a carry bag, tripod, and light kit, or you can do just fine with the base model.