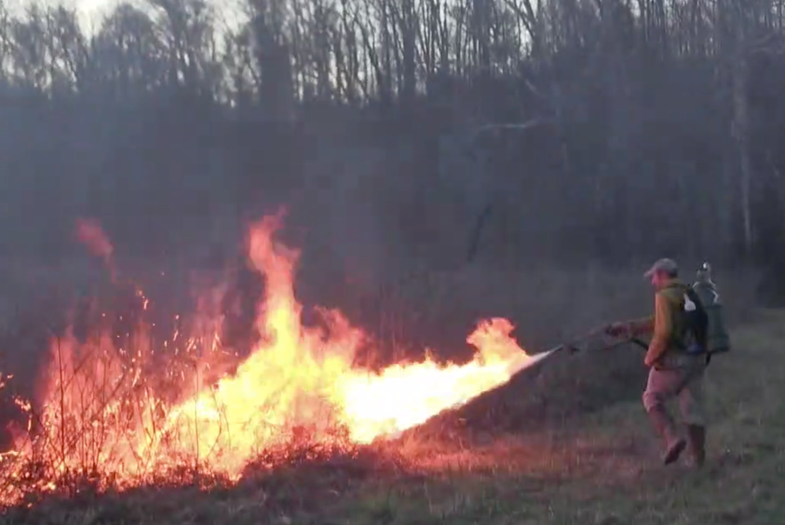 Testing the X15 Flamethrower by FieldandStream

I’ve tested some pretty cool gear over the years—but nothing’s ever turned heads quite like the X15 Flamethrower. My demo model arrived just in time to use on a few fields I’d been planning to manage via prescribed fire. The X15 is much more dramatic than a standard drip torch.

At heart, it’s a 3-gallon metal tank filled with fuel and connected to a hose and wand. That tank is secured to a pack frame, and to it is a valve and smaller hose attached to a 20-ounce CO2 tank (like you’d use on a paintball gun). The CO2 pressurizes the fuel tank and pushes fuel through the wand. On the end of the wand is a pilot-light igniter, which is powered by a small propane tank secured to the pack frame. The system is heavy, but there’s no mistaking it for a real flamethrower.

And it throws one hellish wall of flame. I used a 50:50 mix of gasoline and diesel fuel with a little napalm fuel thickener, which was included with the flamethrower. I mixed the first batch too thick, and it clogged the gun. I used less napalm with the next batch, and I was left with a mixture that was a bit thinner than highly flammable maple syrup. It incinerated dead vegetation on contact, and left me with a good two-hour grin.

With the X15, both the fuel and CO2 go fast. It’s not a problem if conditions are good, your field is ready to burn, and you’re easy on the trigger. But if you’re trying to melt a wet stump, expect to spend some money on fuel. At the end of the day, you can burn a field just as effectively with a drip torch and save on the $1,600 that an X15 will set you back. It just won’t be nearly as much fun.

Of course, there is some risk in strapping a 3-pound pressurized tank full of gasoline to your back and then using it to burn a field, so be careful. Wear flame-resistant clothing. And be sure to check your local regulations (although, according to the X15 website, Throwflame.com, flamethrowers are legal everywhere except California and Maryland).