How to Create Order in a Basement Full of Gear

Some PVC pipe, string, and a bit of ingenuity can solve your storage problems 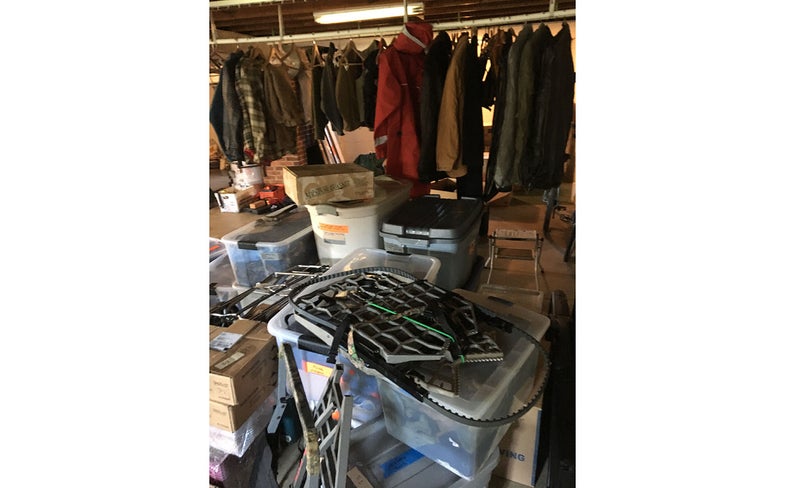 I just moved into a rental in northern Virginia to be closer to Emma during her final year of high school, after which her mother intends that the two of them will move to Denver. I don’t know how often or when I’ll see my daughter after that. So a friend and I loaded up a PackRat container with what turned out to be 10,000 pounds of my stuff. When you consider that we come into the world with nothing and go out the same way, that’s a fantastic amount of crap. I don’t need about 80 percent of it. But I might someday. Besides, much of it, I figure—everybody thinks this about their own stuff—is worth money, if I could find the right place to sell it. Which would cost you more in time and effort than you’d reap. But human nature is, as David E. Petzal personifies, entrenched in its beliefs.

In the meantime, the chaos amid the forest of boxes shoved into the basement boggles the mind. Thousands of books I may never crack again. I’m not a prepper, but you wouldn’t know that by the hundreds of pounds of ammo I’ve stockpiled. I have clothing for Arctic and subtropical environments that I may never wear again. Like a wonderful Cabela’s anorak, its hood trimmed with coyote fur, just the thing for snowmobiling above the treeline. The Inuit were really onto something with the anorak. You can wrap it up tight for warmth or loosen it to dump heat in no time. But the fabric is thin and tears easily. A speciality garment if there ever was one. I also have a full ghillie suit of the type snipers wear, festooned with 6-inches strips of fabric. Commercial fishermen’s rain gear. Bins of boots and shoes.

I had to impose some kind of order on this crap or lose my mind. And I’m one of those people who has to see what he has to remember he owns it. Out of sight, out of mind. I’d happily remove all the doors from the kitchen cabinets—right now I have to open six of them just to find the peanut butter or spaghetti strainer—but then I’d have to store the doors someplace.

I did come up with an elegant solution to hang clothing, by which I mean one that is a) cheap and b) effective. I’m very proud of it. I bought three 10-foot lengths of 1-inch PVC pipe for $4.23 each at Home Depot. In each of three joists, I pounded nails 3 feet apart at a 60-degree angle. From each of these I hung a loop of thick string, then I slid the pipe through the loops. And—shazam—I had 30 feet of space for hangers. Not bad for $12.69.

Watch out, “Total Outdoorsman” T. Edwards Nickens. I’m coming up in your rearview mirror fast. I’m looking forward to carving myself some cutlery out of discarded lumber.