Digital meat thermometers will allow you to make perfectly done steaks, burgers, roasts and more. They’re useful in the oven, on the grill, or when you’re cooking on your stovetop. 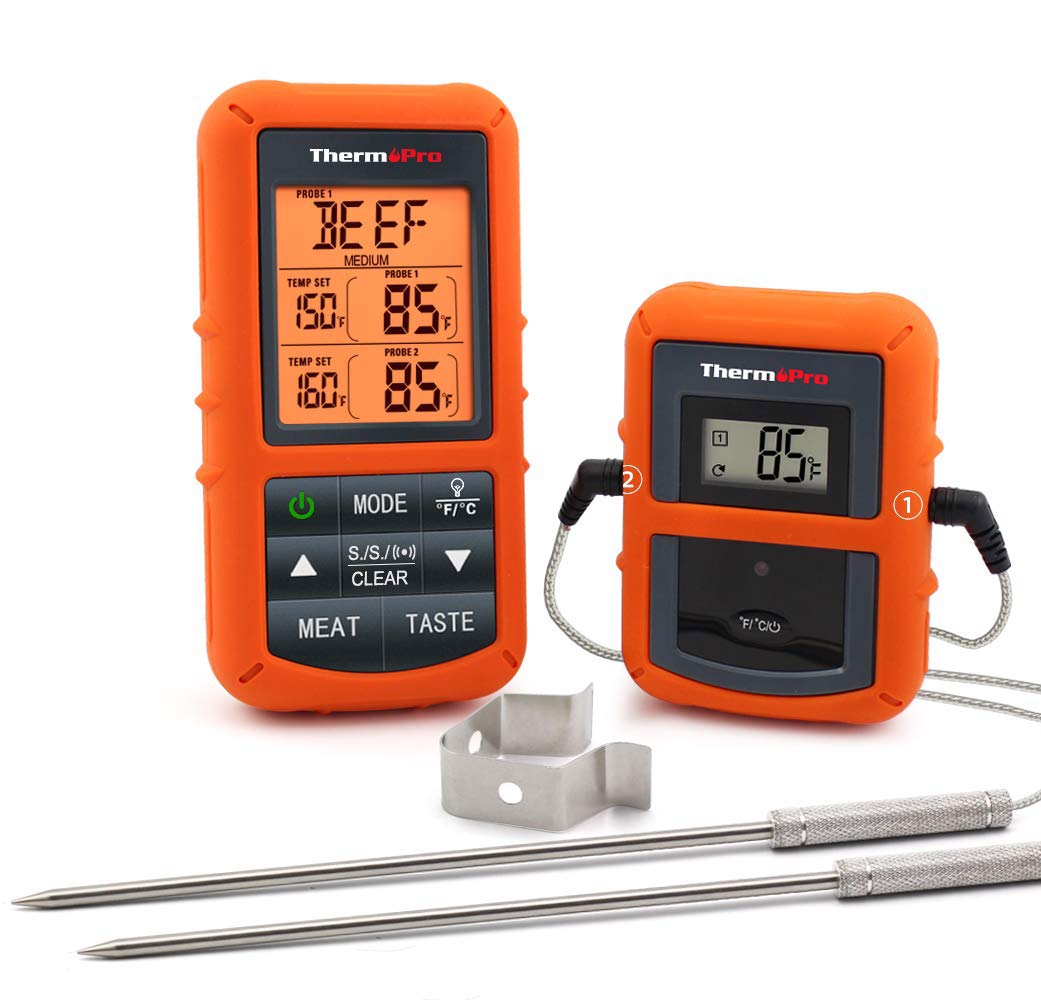 A wireless meat thermometer lets you keep a close tab on your grill even when you're indoors in the kitchen. ThermoPro
SHARE

Just like you can’t unring a bell, you can’t uncook an overdone steak, burger, or roast. That’s why many pro chefs and home cooks use digital thermometers to make sure the meat they’re cooking is done to the correct (and with some meats, safe) temperature. While monitoring elapsed cooking time at a certain temperature or heat level is the longstanding method of cooking meat to the desired level of doneness, there are several variables at work that can wreck a meal. Inconsistent or even inaccurate oven temperatures mean that you can over- or undercook a turkey or a roast without knowing it. Barbecue grill heat levels vary widely, so the amount of time necessary to cook a burger on high heat on one grill may turn that burger to leather on another. And there’s thickness and density of the meat. Steaks and chops vary widely in thickness and consistency, so the amount of time necessary to cook one steak medium-rare will turn another to medium-well. Digital thermometers are more affordable than ever, and are a good investment considering that one can save a meal.

There are several types of digital thermometers, and the best one for you depends on your preferred cooking method.

Look for an instant read meat thermometer that has a fast readout that’s bright enough to see in dim light, is waterproof so you can wash it confidently, can be calibrated so you can verify the temperature, and has a wide enough temperature range for any other uses (such as checking the temperature of oil in a frying pan). Kizen

A digital instant-read thermometer has a thin metal probe that folds out of the housing, which displays the temperature on an LCD screen. This allows you to quickly and easily find the temperature of meat—and in different parts of the meat, which is handy if you’re, say, preparing a large flank steak and want the ends medium well and the middle medium rare. Instant-reads resemble folding knives, so you can keep one in a pocket while you’re cooking. And they are inexpensive—in the $20 range.

A wireless meat thermometer lets you keep a close tab on your grill even when you’re indoors in the kitchen. ThermoPro

A remote digital thermometer is extremely convenient for cooking whole chickens or turkeys, roasts or other large whole meat cuts, or anything that should remain enclosed during the cooking process, such as a fresh ham or pheasants in a smoker. Remote thermometers are also crucial for cooking anything that will be ruined by overcooking, because you’ll always know the temperature of the meat at any time. And, they’re easy to use. You simply insert the probe, close the smoker lid or oven door, and turn on the remote unit. Most have alarms you can set so that you know when the meat reaches a certain temperature—which are great for when you’ll be busy preparing other dishes. Some are wireless, allowing you to walk around with the receiver or even take inside with you if you’re grilling and the weather turns bad (or if you want to socialize while the meat is cooking). A few come with two or more probes, so you can monitor several pieces of meat at once. These range from around $20 for single-function wired units to $100 for long-range wireless thermometers.

If you cook large roasts (or don’t like putting your hands too close to the heat) consider a long-probe thermometer. ThermoPro

Long-probe thermometers have probes that are five or more inches long, making them useful for checking the internal temperature of an extra-large roast. These also work well if you want to check the temperature of anything that is on an extremely hot cooking surface without risking a burn. And, they’re great for checking the temp of a large pot of a liquid, such as frying oil. Long-probe instant-read digital thermometers often don’t have as many features as the standard-size instant-read models, but it’s a good idea to get one that’s waterproof and can be calibrated. Cost is in the $10 to $20 range.