Connecting With Our Paleolithic Ancestors

A look at the Chauvet Cave paintings 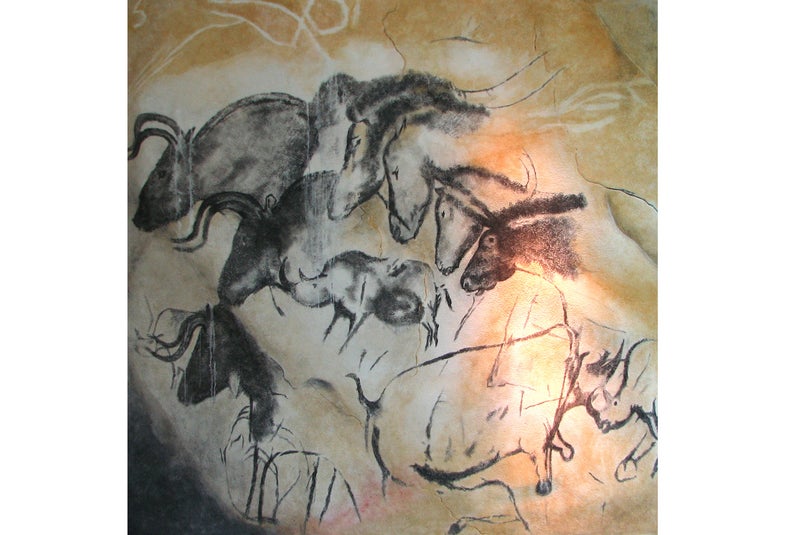 A photo of a replica of one of the Chauvet cave paintings. HTO via Wikipedia
SHARE

I watched a documentary the other night about the 30,000-year-old paintings found in Chauvet Cave in southern France that contains some of the oldest and best-preserved cave art ever discovered. If you’ve ever seen Paleolithic cave paintings, it’s not hard to see why many people thought they were fakes when they were first discovered. They’re too realistic, too “artistic” and full of feeling to have been done by cavemen. But they are both real and extraordinary. They are depictions of horses, cattle, ibex, mammoths, cave bears, rhinos, cave lions, and hyenas. We hunted some of these. And a good many of them hunted us. This was before the invention of the bow. We were not at the top of the food chain.

If you want fast-paced action, Cave of Forgotten Dreams is not for you. It’s slow, dreamy, almost melancholy. But it pulled me and in. And what really got me was a part near the end, where it talks about how the art reflects the difference between how we think and how the people of the time did. The movie echoed something I’d come across when hunting with the Gwich’in, who believe that caribou and men had once spoken the same language and that caribou and men still carry a bit of the other in their hearts. They don’t believe this metaphorically. They take it almost for granted and as a fact. It’s their reality.

One of the interviewee says the painters had two ideas that shaped their consciousness is ways we can barely fathom. One is “fluidity,” that the categories we have—man, woman, horse, tree—can shift. Under the right circumstances, a tree may speak. A man can get transformed into an animal. And vice versa. The other, “permeability,” means that there are no barriers between our world and the world of the spirit. The wall of a cave, for example, may speak to us. It may accept or reject us. A shaman may project himself into the spirit world and return, or receive visits from the spirit world. This is why, for example, the Gwich’in didn’t think it strange for a hunter to dream of caribou in a certain place, go there the next day, and find them. It blew my mind, but to them it was everyday reality.

He had obviously thought a lot about this. He doesn’t take these two ideas much further, except to say that when you combine them, you realize that our consciousness is very different from that of our recent ancestors. I’ll say.

He does make another point worth noting. We call ourselves Homo sapiens, the man who knows. But really, he says, we know very little. We know almost nothing. A better name would be Homo spiritualis. We are creatures of the spirit. We—most of us, anyway—believe in worlds and forces that are larger than us, beyond us. We believe, in other words, that life is a mystery. Some of us hunger for a connection to this mystery, to these worlds and forces. And one of the ways we approach it is through the hunt, because that connects us to our oldest selves.