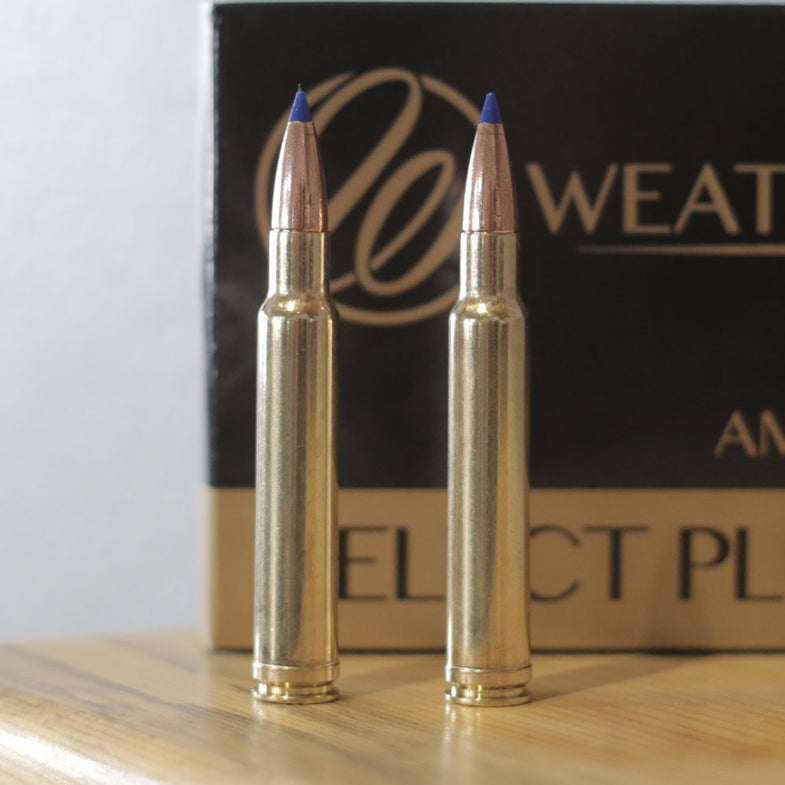 The 340 Weatherby Magnum is one of the powerhouse .338s favored by the author. Weatherby
SHARE

These days it isfashionable to speak about niches in the marketplace. There are automotiveniches, and housing niches, and clothing niches, and (for all I know) quicheniches. There are niches in rifle cartridges as well, and one of the mostinteresting is the trio of very powerful cartridges that are meant for thebiggest North American game and much of what you hunt in Africa. Far morepotent than any 7mm or .30-caliber magnum, they are also much longer-ranged andmilder kicking than really big rounds like the .416 and the .458. Allessentially .338 caliber, they offer a unique combination of truly significantwallop, long-range capability, and manageable (by many people but noteverybody) recoil.

THE .338WINCHESTER MAGNUM This supremely useful cartridge was introduced in 1958 as one of a family ofthree cartridges, including the .264 Winchester Magnum (long faded intooblivion), and the .458 Winchester Magnum (which has found huge popularity inAfrica). Although you can get .338 loads with bullets as light as 200 grains,the proper bullet weight for the cartridge is 250 grains. It moves out at 2600fps (note that all velocities given here are from my own chronographing, notfactory figures). The only other bullet I’d consider is the 230-grain Fail Safeslug made by Winchester. It will penetrate just as well, and it goes about 100fps faster.

A .338 gets byvery nicely with a 22-inch barrel, which is short and handy. However, it kicks,and hard. A .30/06 produces about 15 foot-pounds of recoil, but a .338 doublesthat. If you have a .338 that weighs much less than 9 pounds, you will have toput a muzzle brake on it or the Legendary Chicken Fairy will come out and dancebefore your eyes when you shoot it.

THE .340WEATHERBY MAGNUM This one dates from 1962 and is the .338 in spades: a longer cartridge thatholds a lot more powder and gives 250- grain bullets between 200 and 300 fpsmore velocity at the muzzle than the .338 Winchester. It doesn’t kill anythingany faster, but it makes hitting at long range–past 300 yards–a lot easier.

Weatherby loadsthe .340 with bullets ranging from 200 grains to 250, but trust me, you want tostick to the 250s, and for two very good reasons: First, the long, heavy250-grain bullets lose velocity very slowly, and they are still traveling atgreat speed even when they get out past 300 yards. Second, a 200-grain bulletmoving at .340 velocities (3200 fps) is like a rocket-propelled grenade. Youdon’t want to do that kind of damage to an animal you intend to eat.

Weatherby makesits .340 rifles with 26-inch barrels, but you don’t need that length. A 24-inchtube will do fine. My own .340 is made by New Ultra Light Arms, has a 24-inchbarrel, and gives me over 2800 fps at the muzzle with 250-grain bullets. Itweighs 8½ pounds, which is about a pound less than you want it to weigh, butwhen Melvin Forbes built the rifle, I told him I was willing to gainportability at the expense of getting my brains scrambled, since they werepretty well addled already.

.338 REMINGTONULTRA MAG Introduced in 2002, the .338 RUM is also the largest of the three. It delivers,on paper at least, 25 percent more muzzle energy than the .338Winchester.(Note: If you are distraught at the chart’s seeming contradiction inthe .340’s numbers versus those of the .338 RUM, the explanation is that theformer is operating at high pressure, while the latter is loafing along with amild handload.) It is part of a family of four Ultra Mag cartridges–the othersbeing 7mm, .300, and .375–which is Remington’s bid to have the biggest andfiercest magnums on the block.

Remington wiselyloads the .338 only with 250- grain bullets–the Remington Core-Lokt and theincomparable Swift A-Frame. It holds slightly more powder than the .340Weatherby and kicks a bit harder, which is plenty hard.

Like Weatherby,Remington equips their .338 RUM rifles with 26-inch barrels in order to getevery last foot per second from those huge charges of slow-burning powder.However, I will always trade off a few feet per second for a handier rifle, andI had my .338 RUM barrel cut back to 23½ inches. Theoretically, this shouldhave cost me lots of muzzle velocity, but in reality I lost only 38 fps andaccuracy increased markedly.

The RemingtonModel 700 LSS (laminated stock, all stainless steel) that I have weighs 9½pounds with scope aboard. It’s no pleasure to shoot, but it’s not crippling,either.

Do you needcartridges that are this powerful? Not for deer, but if you hunt elk or bigbears on this continent, they are invaluable. They may be niche cartridges, butit’s a big niche.

BULLET The best bullets for all three cartridges are slow-expanding slugs of 225grains or heavier. Lighter bullets are too destructive and lackpenetration.

PRIMER For the .338, any magnum primer will work; it’s just a question of finding thebest one. For the two bigger rounds, the best choice is the very hot,long-burning Federal.

ALL FIGURES HEREARE BASED ON 250-GRAIN BULLETS AND ARE FROM THE AUTHOR’S SHOOTING. SEE TEXT FORDETAILS.

When Winchester introduced the .338 all those yearsago, it loaded the cartridge with 200-, 250-, and 300- grain bullets. The300-grain ammo didn’t last long in the Winchester line, but it was adoozer.