Duck season may seem like a long way off, but it’s not too early to start training and conditioning your dog for that first retrieve

➞ Don’t do it. Just because it’s hot, humid, and buggy—and because it seems like forever until opening day—this is no time to give your retriever a summer hall pass from training. Short, fun backyard drills throughout the dog days will keep a dog tuned up and sharp for fall, and summer can be a great time to introduce a new skill or two.

The trick is to know exactly what you want your dog to learn, which helps keep sessions short and sweet. We checked in with three experts to devise a set of straightforward drills that you can pull off in your backyard, and in less time than it takes to break a good sweat. Especially in summer, trainers say, 10 minutes a day is better than four hours on the weekend. Schedule workouts early in the morning, before you head out for work, or in the cool of the evening hours before you hit the sack.

His Drill: The Wagon Wheel

➞ Charlie Moody (tuscaokakennels.com) has been training dogs since he was 19 years old. He didn’t stop as a college student, and even kept it up while working at a bank after graduation. Now he trains a steady clientele of retrievers on 320 acres of training ponds, fields, and woods outside Louisville, Miss., and runs 18 field trials a year. “Particularly in summer, 10 minutes a day is better than four hours on the weekend,” he says. “Keep things simple, and zero in on a very specific task.” Like taking a line for blind retrieves.

1. The Wheel Deal
“The nice thing about this drill is that it can be done in your backyard, before or after work, so you don’t have to commit a lot of time to it,” Moody says. “Nobody wants to work too hard in summer, and that includes your dog. You’re teaching two skills at once here—how to take a line, and how to focus on where you are sending the dog, and not where they want to go. Keep at it until your dog moves fluidly from bumper to bumper, then add as many as four more bumpers to the wheel.”

2. Assume The Position
“Set up the drill in the shape of a wagon wheel. You and the dog are at the hub, and the bumpers are at the end of each spoke. Have the dog sit and stay, then toss out four white bumpers 20 yards away at the 12, 3, 6, and 9 o’clock positions.

“Now the fun begins: Send the dog to retrieve a bumper, but don’t start with the last one you threw. That’s where the dog’s focus might be, but you’re saying: No, not that one. Go to the one I’m telling you to retrieve.”

3. Come Into Focus
“This drill also teaches a dog to listen, so it’s important to be consistent and strategic in how you send the dog. When I’m ready to send the dog, and he pulls his head away and looks somewhere else, I say, ‘No, here,’ as I shift his focus toward the target bumper. As soon as the dog pulls his head off the wrong bumper and looks to the one I want, I say, ‘That’s it.’ The first time I say that, it doesn’t mean a hill of beans. But after a few sessions, I’ll see those eyes come up and those ears prick and I can tell he knows, O.K., that one. And that’s the moment I bring my hand up and send him.”

Bonus Tip: Beat the Heat
Don’t feed the dog within two hours of a training session. Hot weather makes dogs more susceptible to a twisted stomach—gastric torsion—which can be deadly.

His Drill: The Three-A-Day Routine

➞ As a kid, Craig Clark (splashkennels.com) trained rabbit hounds and squirrel dogs, but a chance meeting with famed British Labrador retriever trainer Robert Milner set him on fire for water dogs. With training kennels in Tennessee and Mississippi, Clark specializes in dogs trained as both field and family companions. “My clients aren’t field trialers, but hunters who live with a retriever as a family member as much as a hunting companion,” Clark says. “I want a dog that’s a pleasure just to hang around, as well as hunt with.” Clark starts with a rock-solid recall—teaching your dog to come no matter the conditions.

1. Set The Table
“A recall is critical for success in the field,” Clark says. “You can start conditioning for recall at any time—even with a young puppy—with a food-pan drill. When you feed the dog, wait until he’s out running in the yard or playing in another room. Peep the whistle or call the dog, shake the pan, and put it down. When you feed twice a day, that’s two recall sessions, and you’ve set up an environment in which they succeed every time. That’s very important.”

2. Take The Lead
“To extend recall training to the yard, start with a 20-foot lead rope. Take the dog out in a controlled environment—you don’t want distractions, such as kids running around, or a lot of noises. Hold the rope near the midpoint, let the dog wander around, and when he gets to the end of the rope, issue the recall command and give the rope a tug. When he returns, give him a reward—either a food treat or lots of praise. Once the dog has performed three or four successful recalls in the session, put him in a crate or send him to the kennel or in the house to a quiet room. The point is to let the lesson sink into his long-term memory for 15 or 20 minutes. You get so much more out of a dog by doing this.”

3. Go Long “From there, it’s a matter of introducing longer recalls, using the entire 20-foot rope length, and adding distractions and new environments. But you never go up a level until you have 90 percent behavior success.”

4. Cut The Cord
“Once you are ready to try this drill off the lead, go for a walk with the dog. Let him get 25 yards away from you, command the recall, and give the dog a treat or praise when he returns to your side. The thing is, dogs will often come running back just to check you out. Don’t reward them for coming back on their own terms. They only get the reward when they’ve obeyed your command.”

5. Keep It Going
“Do that every day, and with the food-pan drill, that’s three quality training sessions a day—and you’re not adding any more time to your schedule than you would normally invest in feeding and walking your dog.”

Bonus Tip: Beat the Heat
Freeze chicken broth in a standard ice tray, and give your dog a broth cube after a training session. It helps cool him down and is a tasty reward for a good series of drills.

His Drill: Take a Stand

➞ A trainer since 1999, Kirk Wichman ­(hidden​lake​­retrievers.com) spends the off-­season as a duck hunting guide. He and his wife, Laura, train on 240 acres with training ponds outside Anderson, Texas. “The best dogs,” he says, “are the ones that you don’t even know are in the blind until it’s time to go to work.”

1. Up You Go
“It’s one thing to teach a dog to sit and stay,” Wichman says. “It’s another to teach a dog to jump up on a dog stand, sit, and stay there. Start with the dog on a 6-foot lead with either a prong or a choke collar. That allows you to apply pressure and give the dog the chance to remove the pressure with correct behavior. Set up a place platform about a foot off the ground. It can be an ele­vated piece of plywood or a dog stand like you’d use in a marsh. Just make sure it is very stable. Walk the dog to the platform, point to it, and give the command to place. Most of the time the dog won’t jump up there at first. That’s when you give the lead a pull up and toward the platform, keeping pressure on the collar.”

2. Down Time
“If you’re lucky, he’ll jump up, which releases the collar pressure, and you tell him to sit and stay. Sometimes I’ll have to physically pick the dog up and place him on the platform, keeping pressure on the collar until the dog is on the platform. You’re not looking for perfection. On the first day, all I’m looking for is effort. If he puts his front paws on the obstacle, that’s enough. I want to see that the dog understands what I’m asking, and acknowledges the command. Then you build from there. The second day is up and down, sitting for a few seconds at a time. Multiple repetitions. I’ll make him stay for longer periods of time, say, three or four minutes. I’ll start to put distance between me and the dog, then raise the stand or move to other platforms.”

3. Simulate The Hunt
“And once a retriever is solid on place, it opens a new world of training options, such as taking marks from place, staying steady from place, and working in hunting situations. Put a dog stand on a tree or in a beaver swamp, and work marks in the water. Send him on water retrieves from your hunting blind so he’s accustomed to the place command from there. Dogs like to have their own spot, and the better they understand where that is, the happier everyone will be.”

Bonus Tip: Beat the Heat
In summer, keep a spray bottle of rubbing alcohol handy. If your dog gets overheated, spray her paw pads, belly, and armpits. Alcohol evaporates quickly, and that’ll help cool her down. 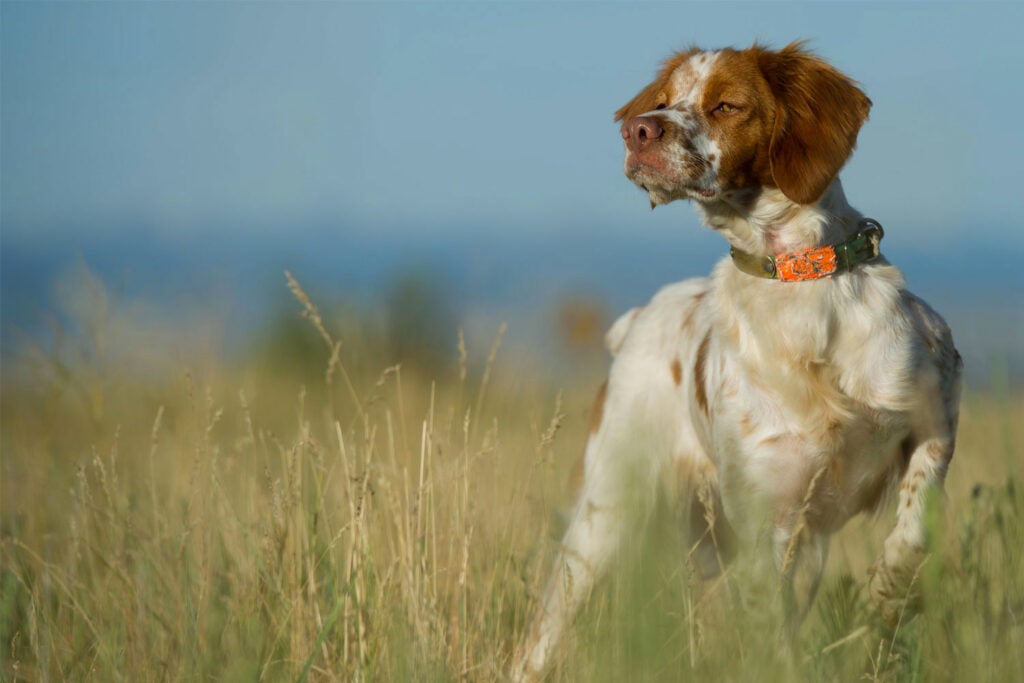 Our tribute to the most loyal, loving, and hardworking hunting partners ever – in no particular order