Three Pump Shotguns for Under $300

We fired a total of 1,500 rounds to test three shotguns that won’t break your budget 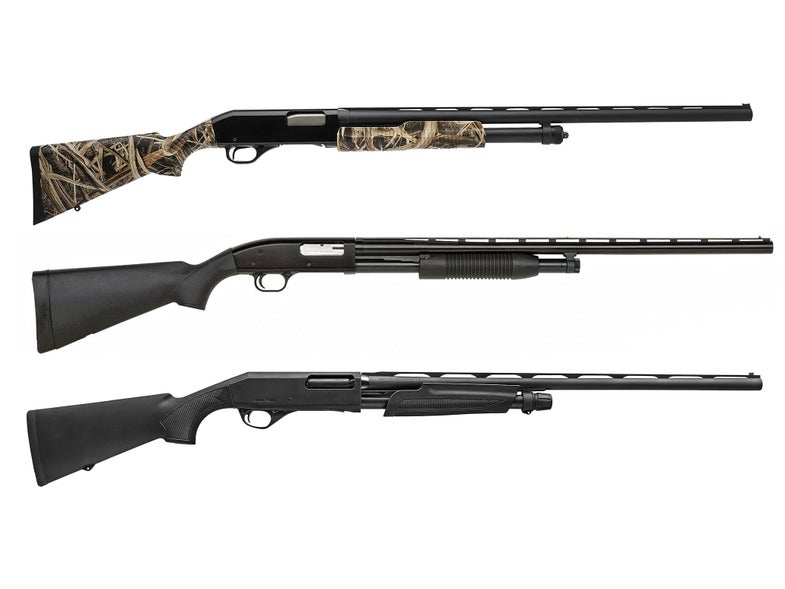 Life is too long to shoot cheap shotguns, to spend your precious days afield saddled with a piece of junk and to have nothing of value to pass on. That’s what I’ve always believed anyway. For years it’s driven me nuts that people are willing to pay more for a flat-screen TV that they’ll junk in five years than they will for a shotgun that could last for two or three generations.

Yet one of the dubious advantages of globalization is ever-cheaper consumer goods, including three pump guns—one Turkish, one Chinese, and one Mexican-American—so inexpensive that, to my mind, they change the cheap-gun math. Who cares if a $250 shotgun doesn’t last? Just buy another one. Maybe throw in a second to pass down to Junior, too.

Race to the Bottom

This story begins back in 1988, when Savage stopped making the bargain-priced Stevens Model 67 pump. Fearing that foreign competitors would fill the empty niche, Mossberg, whose 500 sold for $25 more than the Stevens 67, sought to cut the competition off at the pass—Eagle Pass, Texas, to be precise. Using parts made at its then-new plant in Torreon, Mexico, and assembling them just across the border in Eagle Pass, Mossberg introduced the Maverick 88, a cheapened version of the Model 500. Cheapened Model 500 may strike you as a redundancy, but that’s what it is.

The 88 held off all comers in the dirt-cheap-pump category for almost 30 years, but now it’s got two challengers from overseas: Stoeger’s P3000 and Savage’s Stevens 320. I put 500 rounds through each recently to find out whether they would break in or break down. As someone who hates cheap guns, the results were depressing: I did not have a single malfunction or failure to fire. I should note that all three come with a Modifed choke tube only, so you may have to invest a little extra in tubes to make them more versatile. Here’s a closer look at each.

The Maverick 88 will be familiar to anyone who has shot a Mossberg 500. Essentially, it’s the same gun, except for a different trigger group, with a nonreversible crossbolt safety in place of the 500’s top-tang thumb safety. In other words, lefties are out of luck unless they want to pay a little more for the 500. Also, a ring-tailed synthetic forearm is molded around the action bars, which is fine unless you want to replace it with something tactical, in which case you’ll need to get new action bars, too.

My sample gun, with a 28-inch barrel, weighed just a little under 7 pounds. As the only nonrotary bolt action of the three guns I shot, the Maverick had the stiffest stroke, but only by a tiny bit. It comes with Mossberg’s reputation for inexpensive reliability, and the blued barrel will resist rust better than the matte finishes on the other test guns. The Maverick 88’s one frill is a middle bead, which is nice if you will use the gun for turkey hunting and need to aim.

This all-new, 3-inch, Turkish-made pump bears a family resemblance both to its big brother, the 31⁄2-inch Stoeger P350, and to its parent company’s Benelli Nova. While the Nova has a steel cage molded inside a polymer receiver, the P3000 has a conventional alloy receiver, which keeps its weight down to about 6 pounds 13 ounces. Like the Nova, it has a swivel stud cast as part of the barrel band.

The flat, Benelli-style slide-release button may be a bit tricky with gloves, and the P3000 sports a smallish safety button. Trigger pull is 10 pounds plus. I hardly noticed, because I am a hamfisted clod, but you may feel differently. The gun’s matte finish is apt to rust more easily than blued, so you’ll need to take extra care. That said, my test gun was very slick and only got slicker as I shot it. I liked the long fore-end, which allows a short hold with the front hand. For me, the P3000 was the most pleasant of the test guns to shoot and the easiest to hit with.

Last, and least from a dollars-and-cents standpoint, is the matte-finished Stevens 320, an insanely inexpensive pump gun that Savage is importing from China to re-enter the cheap-shotgun wars. The 320 is clearly inspired by the Winchester SXP/1300 design, with a similar rotary bolt and a safety in front of the trigger guard. While the trigger itself is not particularly heavy, it is very squishy—enough that I blamed it for one or two misses on the skeet field (and whether it caused the misses or not, that’s the story I am going with). I liked the long fore-end, the fiber-optic bead, and that the receiver is drilled and tapped for a scope. It was the only one of the three guns I was able to take to the field, where it performed well and accounted for a couple of September Canadas.

For such a piddling amount of money, this pump, like the other two models here, is the kind that you could leave in the bottom of the duck boat, abuse in the salt marsh, or stash behind the seat in your truck until it doesn’t shoot anymore. Then you can toss it like an old TV and buy another one.