Big survivor bucks may seem to disappear during the late season, but according to noted whitetail researcher Grant Woods, mature... 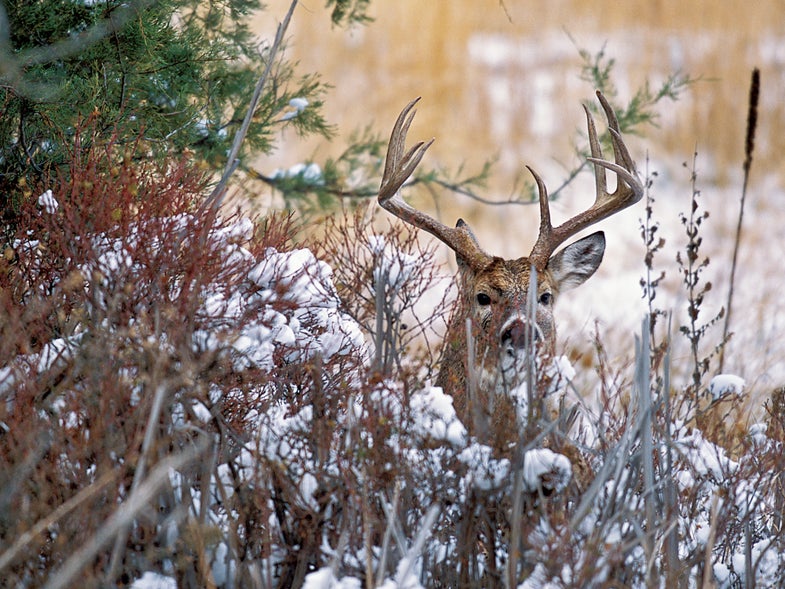 Big survivor bucks may seem to disappear during the late season, but according to noted whitetail researcher Grant Woods, mature bucks looking to escape cold winds and hot pursuit are often closer than you think they are. Here are three of Woods’s go-to late-season lairs.

Advice to prowl south-facing slopes where late-season bucks can bask in sunshine is useful to a point. But where prevailing winds whip into or across these hills, bucks will move to the lee side. Wind protection trumps sun every time, says Woods.

“If there’s good thermal cover in the form of conifers or dense grass, I’ll hunt the sheltered side of hills even if it’s in the shade.” Grassy hillsides offer especially good opportunities to spot and stalk: On one Kansas trip, Woods spotted an 11-year-old buck bedded in switchgrass and crept within 7 feet before making his shot.

Heavy rains or equipment problems often keep farmers idle at planting time. Come fall, certain fields or portions of fields that would normally feature freshly harvested stubble are instead thick with head-high weeds. Deer are quick to hole up there.

“In farm country everybody knows the permanent blocks of cover, so these get hunted hard,” Woods says. “But no one hunts fallow farmfields late in the season because they’re usually bare dirt by then.” Get permission to hunt these spots, and you’ll find bucks.

You’ve heard of late-season bucks bedding close to the barn. But where, exactly? Two of Woods’s favorite places are the evergreen shelterbelts planted to protect farmsteads from the weather and nearby stacks of hay bales.

“I can’t count the times I’ve jumped bucks 200 yards from the equipment shed,” Woods says. “Glass the downwind sides to spot a good buck. Then move in.”