Pro tiers share tips on how to use bucktail to create some of the largest, meatiest streamers you’ve ever created 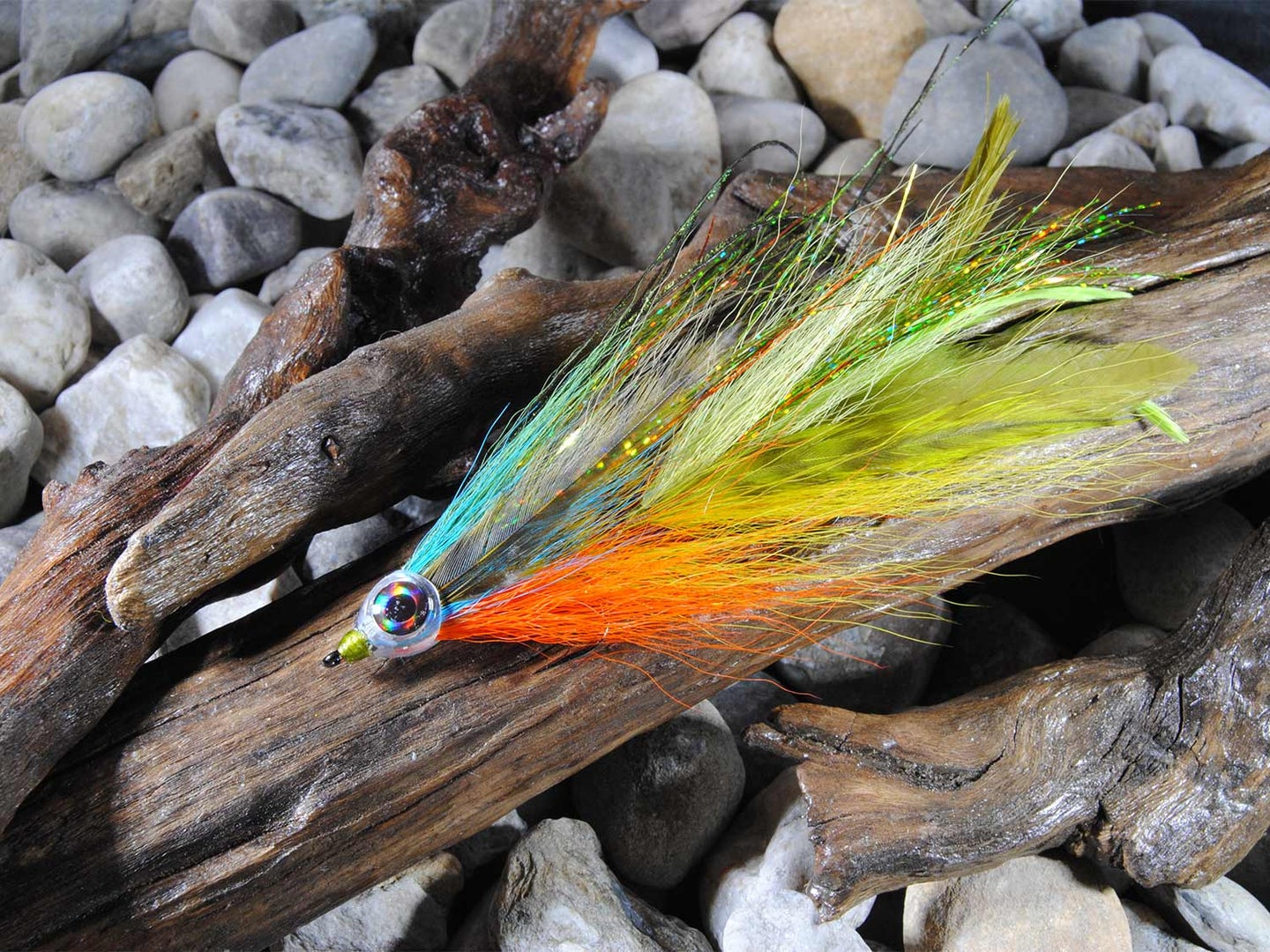 Bucktail is one of the most abundant and easy-to-find fly-tying materials around. It also happens to be one of the most effective when it comes to attracting and catching fish. Beginner tiers like it because it’s easy to use, but it takes years at the vise to really master. It’s a classic that never goes out of style—and for predator flies, it just may be the perfect material.

I’m interested in using bucktail more effectively in my own patterns, so I spoke with multiple professional tiers who have created noted bucktail patterns over the years, including musky legend Brad Bohen of Musky Country Outfitters.

“When it comes to using bucktail to fool muskie, there are some metaphysics involved,” Bohen told me. “They’ll eat molded soft plastics, but I look at the way a muskie comes to a fly, and it’s magical. The right fly, in the right moment, and the way a muskie takes it—it’s the most poetic thing I can think of in the world. There is something that goes beyond what we can understand or quantify about bucktail, and the way it looks in the water—it looks alive.”

To help you learn how to use this simple, enigmatic material yourself, here are some tips from Bohen and other expert bucktail tiers.

A Mantra of Hair, Feathers, and Flash

Bohen made a career out of tying bucktail flies, inventing new patterns, and chasing predator fish and boiled down his understanding of bucktail predator flies to a simple mantra: hair, feathers, and flash.

“From these three simple materials, which are very available, you can do a number of different styles and profiles, varying up the way you lace the hair, feathers, and flash together through different tying techniques,” Bohen said.

“Start out with the best ingredients you can find,” Bohen said. “Bucktail is a natural material and it can get confused in the dying and handling process.” Sometimes mishandled bucktail hairs can develop a “memory,” becoming permanently twisted or bent. If that’s the case, it takes the right technique to secure bucktail hair to the hook shaft. For that, Bohen says thread tension is key.

“Have the thread at a right angle to the hook, with your bobbin parallel along the shank, and learn how to take it right to the max limit,” he said. Be prepared to break a lot of thread as you practice cranking down with your bobbin, but the end result is worth it. “The materials will flow around the shank and behave really well with the right amount of tension.”

Another tip about thread: pay attention when your bobbin hangs beneath your fly. As it hangs, the thread unwinds, becoming weak and flat. Before making another thread wrap, spin the bobbin so the thread becomes spun. “It’s stronger, and the thread profile is narrower that way,” Bohen said. For thread, Bohen only uses 210 Denier wax Flymaster Plus.

Through evolution, bucktail has become a material designed to last in the outdoors, Bohen said. That durability is important, especially for a muskie fly. Remember, muskies are known as the fish of 10,000 casts, so these flies spend a lot of time in the water before ever connecting with a fish.

“There are a couple hours a month WHEN these fish will eat anything,” Bohen said. “If your glasses fell off in the water at the right time, the fish would eat them. But most of the time you’ve got to work it, because it’s a tough sell. You don’t get a lot of feedback with predator fish. It’s not like bass fishing or trout fishing, so it really boils down to what you’ve got on the end. It’s faith.”

Bohen said having confidence in your fly is the most important aspect of fishing for muskies and pike with bucktail. If you’ve practiced your techniques, and tied a bucktail fly you believe in, you’re already closer to hooking up to a big trophy.

“Having the right fly at the end of the line is the easiest way to Valhalla,” Bohen said.

The Anatomy of a Bucktail Predator Fly

Fly-tier Pat Cohen is known for spinning deer hair (the hair located on the back or belly of a deer), but he works just as well with bucktails. “All big predator streamers—really all the big flies, even ones for big brown trout—are based on the Bucktail Deceiver recipe,” Cohen said.

The classic fly tied by Bob Popovics, the Bucktail Deceiver, has caught fish all over the world and has enamored fly-tiers for decades. It has been redesigned and rehashed several times over, but the foundation of the fly remains the same: create a natural, lifelike taper. “Grabbing from the deer’s tail gets hollow hair with a flair to it to create the illusion of bulk without using more material,” Cohen said.

Once you’re ready to add bucktail to your hook shank, think about how you cut it from the tail. “Cut hair as close to the hide as possible,” Cohen said. “Then, hold it by the tips and pull out the short pieces.” Removing short hairs will help give your patterns a consistent length and shape. The angle of your cut is just as important. Cohen said to cut your hair at an angle, then use several tight thread wraps to secure it to the shank. “Cutting the ends at an angle means you’re tying it in at different lengths. That way, if you lose hair, you don’t lose them all.”

After you have the right thread pressure and the right materials, think about your predator fly’s structure. “Building bigger flies is all about the support structure, the build structure,” Cohen said. “Stiff bucktail in the middle of the pattern can support feathers that stick out longer, and give it more motion while maintaining that natural, bullet-shape silhouette.”

Cohen said every predator fly you tie should follow the same structure, or what he likes to call the “Fast Tail, Slow Head” theory. “The natural push of water moving across a fly’s head and around the fly at the back makes it come to life,” Cohen said. Keep the head of your fly wide enough to push water, but keep the taper a teardrop or bullet shape so it can shed water quickly. “The bucktail needs to breathe in the water.”

Shape Your Flies To Entice Predators

In addition to the idea of using bucktail to create the illusion of bulk, famed fly-tier Bob Popovics is also known for creating another predator fly staple: the hollow fly. Tying with the hollow-fly technique adds even more bulk to the fly, without adding more material, and therefore, more weight. Sam Looper ties bucktail with the hollow-fly technique because it’s so effective at attracting predator species.

“I want to achieve a false sense of bulk, creating a silhouette underwater that appears as though it’s a baitfish shape,” Looper said. “Something that entices a predator is generally a teardrop shape, especially if we look at baitfish from the side.”

To tie bucktail with the hollow-fly technique, start by securing the hair onto the hook shank backwards. Instead of attaching the hair so the taper extends off the back of the hook, flip the hair around so it points forward, extending beyond the hook eye. After securing the hair with tight thread wraps, use your fingers or an empty pen to push the hairs backwards. Then, secure the hair backwards with your thread. The fly should appear bigger, but have a “hollow” center, which lets the bucktail breathe.

“Maybe it’s because the fibers themselves are naturally tapered, but when you put a bunch of fibers together, and introduce a little air inside of them, they basically create a pocket that captures air,” Looper said. “Then run water over the top of them and they create that teardrop shape without adding crazy amounts of weight.”

“There are all kinds of heavy materials that can appear larger underwater, or appear denser, but when creating a silhouette without introducing a lot of weight, I choose bucktail,” Looper said.

Freshwater predators like pike and muskies aren’t the only fish that will fall for a well-tied bucktail fly. Saltwater patterns using the Bucktail Deceiver or hollow-fly template have been fooling fish for ages. But it’s easy to get carried away. Scott Stryker of Stryker’s Custom Flies says to be careful of falling into the trap of adding too much material to your hook.

Even if you start tying your fly sparsely, the accumulation of bucktail can add up, making it too heavy to move correctly in the water.

Not only does a sparse fly move better in the water, but it also sheds water more quickly while you’re casting. Even the weight of water inside a fly can throw off your cast, or make you wear you out on a long day.

While you’re keeping your materials sparse, Stryker said to do the same with your flash. “I’m not a big fan of a lot of flash, even with big musky flies. Too much flash tangles immediately, but also, under normal conditions, it doesn’t take much for a fish to see a fly.”

A little flash goes a long way. Instead of tying in bunches, try tying in just a single strip at a time. “Just tiny little bits,” Stryker said. “Fish see the slightest bit of flash from a distance, and they’re going to be drawn more by the size of the fly pushing through the water, and the sound waves it’s putting out. Plus, flies look a lot nicer when they have less flash on them.”

Read Next: Fly Tying Tricks to Fill Your Fly Boxes

Rather than relying on flash to attract fish, focus on shape and color. One of the reasons bucktail is so versatile is the many available colors; from natural browns and whites, to Hi-Vis pinks and purples.

“When I’m trying to mimic a particular baitfish, like a bunker or something, I’ll take small clumps of bucktail and actually mix them up in my hand to blend colors before I tie them in,” Stryker said. For larger flies, you can tie in the colors separately and still have them blend. “For example, try laying down chartreuse, tips pointing forward using the hollow tie technique, and before folding it back, throw in a little purple. When you flip it back over, now the purple is underneath, and the chartreuse is on top.”

Don’t be afraid to pair your colors in bizarre combinations, either. There are classic combinations, like red and white, or Fire Tiger (chartreuse, yellow, and orange), but there’s plenty of room for experimentation.

“I’m a big fan of breaking the rules and mixing colors that you wouldn’t normally see mixed together,” Stryker said. “I’ve tied a fly that had a lot of dark burgundy red to it, and I threw in purple. Typically you’d think those colors clash, but it has a decent look to it.”

When you first start adding bucktail to your flies, it’s common to see hairs fall out, or flair incorrectly. Don’t stress. Bucktail may be a simple and common material, but it takes practice to really achieve perfect results.

“It’s a little bit like being a vascular surgeon working on blood vessels,” said Bohen. “It takes a lot of practice. You’ve got to break a lot of thread and you’ve got to make some ugly flies to really get good at it.”

It may take time to get a handle on each technique, but once mastered, these strategies will help you tie effective flies for any species around the world. “These are building blocks,” Bohen said. “Once you learn these techniques, you can cross them over or mix them up to see what works out really well.”