We put 14 new scopes to a grueling four-day test to figure out which will give you the best, and most affordable, view this fall 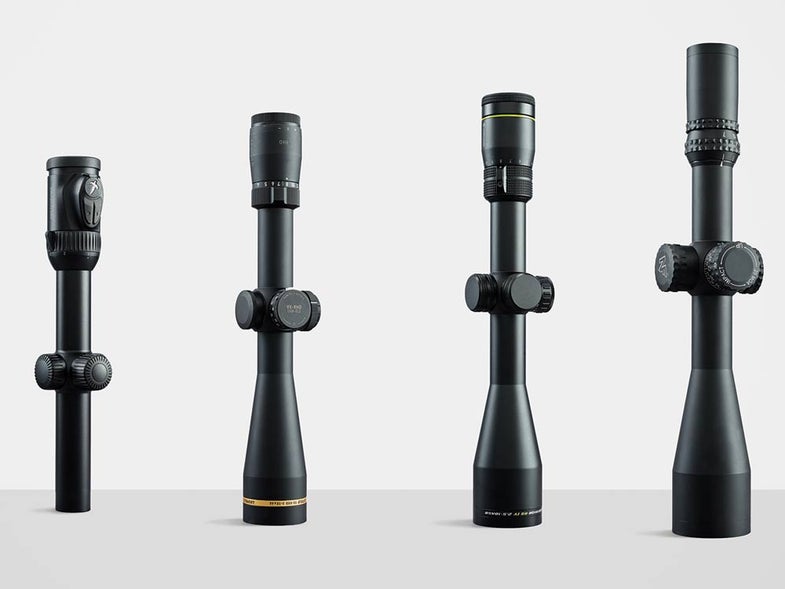 This year we put more scopes and binoculars than ever (27 total) into the hands of more testers than ever, including myself; gun writer and F&S contributing editor Richard Mann; and University of Rochester optics professor Jim Zavislan and four of his hunting buddies and fellow optics nuts: Jeff Arndt, Joel Hoose, Marty Lasher, and Tim O’Connor. The result is our biggest, most exhaustive optics test to date.

There were some clear trends: In scopes, it’s all about massive tubes, exposed turrets, and sophisticated sighting systems for long-range hyperaccuracy. There’s an uptick, too, in first-focal-plane reticles, with which subtensions and holdover values remain the same at any magnification. What’s that? You just want a scope for normal hunting? Don’t worry. That’s here, too.

After days of testing, we narrowed the field down to the top 10 in each category and picked the best performers and can’t-miss bargains for both. Here’s how it all shook out. —D.H.

→ We graded riflescopes in 10 categories, worth 10 points each: Resolution: We set up a 1951 USAF Resolution Test Chart at 100 yards in sun and shade, then recorded values corresponding to detail resolved. Image Quality: Looking at a multicolored target set at 100 yards, we assessed overall clarity, feeling of immersion, and visual artifacts, especially at the edges. Low-Light Performance: As dark fell, we ranked the scopes based on how long each allowed the observer to resolve a given level of detail on the resolution chart. Reticle Testers: judged the reticles for ease of use, visibility, and practicality. Function: We evaluated ease of focus, turret adjustments, and overall user-friendliness. Mounting: Considering the available mounting space and diameter of the objective lens, we gauged how well each scope would interface with various rifles. Repeatability: After zeroing each scope, we shot a box drill, involving repeated horizontal and vertical reticle adjustments, to determine the repeatability of the windage and elevation controls. Weather Resistance: We submersed each riflescope in a 5-gallon bucket, and then froze them for an hour, rating the effects on image and functionality at three stages. Features: We rated available features—lockable turrets, zero stop, parallax adjustment—relative to purpose. Value: Performance divided by price. Finally, we crunched the numbers for a total possible score of 100. —R.M.

1. Best of the Test: Swarovski Z8i

First, the view through the new Z8i is just this side of perfect. Only one scope (the Nightforce) scored better, and only very slightly so, in image quality and resolution. Second, with Swarov­ski’s unique glowing-orange, nonflaring, illuminated reticle, which can be set for low or bright light and has a vertical-­position off switch, the task of aiming at any animal from dusk to dawn seems right out of a video game. Third is an ingenious snap-on, snap-off ballistic turret that allows you to preset the scope for a dead-on hold at multiple distances—which makes the Z8i the most versatile hunting scope (there are four configurations) on the market. Add it all up and you have our winner. It did not get the best low-light score, but its brilliance in every other respect makes it the best new scope for 2017.

The VX-5HD CDS-ZL2 comes with an MOA-based Custom Dial System that lets you order a turret calibrated to your ammunition. Five reticle choices, including illuminated, are available, and a zero stop and lockable turrets that keep track of the number of revolutions are standard. In short, this scope has all the long-range bells and whistles—and yet it isn’t as long as a baseball bat, nor as heavy as a six-pack. It’s a truly practical hunting scope, with which you can shoot as far as you like. Optically, the VX-5HD was just shy of the very best. Reticle visibility and practicality were first-rate, and it was one of only two scopes to get a perfect score for weather resistance. It’s ready for work in the rain forest, the desert, or the Arctic. Custom Shop treatment, including a variety of finishes, is available on all Leupold riflescopes before or after purchase.

This was the surprise of the test. The Endeavor RS IV did not start out particularly well, with good but not great scores in image quality, reticle, and mounting space. With no parallax adjustment or zero stop, it got a low score for features, and as such is probably not your scope if you want to dial in come-ups for very long shots. But straight 9s and 10s for repeatability, resolution, weather resistance, and value shot the RS IV up into our top three overall. In a field of mostly specialized precision-shooting optics, this is a solid, hardworking hunting scope that reveals fine detail near the edges of daylight, and sports an illuminated reticle that’s highly visible and practical for the field. All of this for a price that falls anywhere from less than one-half to one-seventh that of any other scope in our top five.

Indeed, this is one hugely impressive scope—the only one in our test to receive perfect scores in image quality, resolution, and repeatability. But it is also one huge scope—not something most people would put on a hunting rifle. As a niche, long-range target scope, however, the ATACR 7 F1 has it all, including a gorgeous image, highly visible and very practical reticle options with MOA or mil graduations, a zero stop, and 100 MOA’s worth of elevation adjustment. At over three grand, it got dinged on value, of course. And its low-light and bad-weather performance proved a bit lacking, but those aren’t major considerations on the range. If your goal is to spin a turret for long, long distance and make itty bitty steel targets ring, the ATACR will not let you down. Just make sure you get some serious mounts to hold it in place.

If you want the most brilliant image regardless of price, then say hello to the Magnus i, which outscored all others in the combined ­optical-​­performance tests. With no zero stop or parallax adjustment, it's more traditional hunting scope than long-range specialist. A ballistic reticle is available, and an illuminated dot is standard.

With an MOA reticle and 1⁄4 MOA clicks, locking turrets, parallax dial, and perfectly repeatable adjustments, the Engage is set up smartly for long-range precision, yet it's lightweight enough to top a hunting rifle. The reticle is a little thin for some field applications, but the scope's price, versatility, and performance make it our Best Value.

A solid performer across the board, this scope is another great value. From a user-­interface standpoint, the Black X1000 was rated as good as any, and it also stood out in the low-light test. There was ample mounting space, and the scope is compatible with Nikon's excellent Spot On Ballistics program.

With a perfect low-​light score and a sensible reticle, the Conquest V6 makes a fine hunting scope. The 6X zoom adds versatility, but the lack of range indicators on the parallax knob and the inability to lock the turrets hurt its score, as did middling marks for resolution and value. Still, at the edges of shooting light, the Conquest shines.

The Veracity's score suffered a bit from good but not great scores in most test categories. It did stand out in low-light performance and has solid features, including a zero stop and parallax adjustment. But its resolution and value scores brought it down some. All told, the Veracity is a very functional scope with the right bells and whistles for long-range precision. $1,079 • Burris Optics

Like the Veracity, the Viper PST delivered decent scores across the board. It has lockable turrets, and the VMR-2 reticle offers a nice balance of visibility and practicality. Although image quality and low-light performance were a bit lacking, the Viper PST makes a good choice for a mixed-bag safari or a three-gun scope on an AR.