Totally Rad Shotguns of the ’80s

The decade that gave us Madonna, McFly, and the piano necktie also produced some of the best factory shotguns ever made 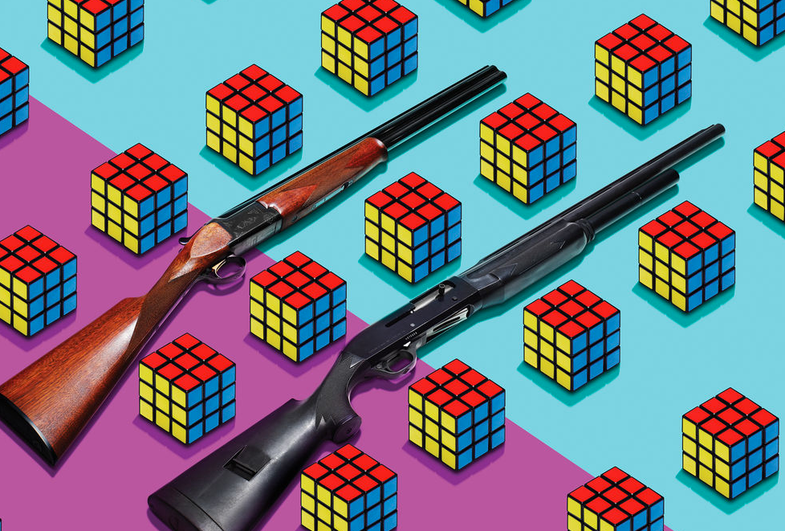 In the 1980s I cheered the Miracle on Ice and cried when the Challenger exploded. I got married, became a father, and sold my first story to Field & Stream. I might have cultivated a perpetual three-day stubble à la Sonny Crockett. What I didn’t do was buy enough shotguns.

It’s not too late. Shotguns of the ’80s are still on used-gun racks. They’ve aged better than, say, Alf, and way better than Bill Cosby. Compare any one of them with a similar product of 21st-century cost cutting and you’ll immediately see a difference in build quality and fit and finish. In the ’80s, they still made them like they used to. Also, ’80s gun buyers, tired of the glossy wood and white-line-spacer look of the ’60s and ’70s, demanded classic styling. Ironically, the same era that gave us shoulder pads, big hair, and neon clothes also gave us more guns with straight grips, plain pads, and satin finishes.

The ’80s were also a time of innovation. Remember New Coke? No one does, at least not fondly. But shotgun innovations of the ’80s were the real thing, including all-load semiautos, 31⁄2-inch chambers, rifled barrels, the perfection of the inertia system, and the widespread use of interchangeable choke tubes. What this means for you is that unlike the guns of the A-Team, which never hit anything, the real guns of the ’80s can still hunt.

Eighties nostalgia is a thing right now. You want your MTV? You can have it. I want my ’80s shotguns. Here are eight exemplars of the decade.

Like the 1100 before it, Remington’s 11-87 was a true game changer. Before its introduction, gas guns shot either heavy loads or light ones—not both. Remington solved this problem with a pressure-compensating valve that vented off excess gas from heavy loads, preventing the bolt from slamming too hard against the receiver. The 11-87 was the first widely popular shotgun to offer this feature, although the Mossberg/Howa 1000 Super was actually first by about a year. Nearly identical to the 1100, the 11-87 has the same stock dimensions, so it fits almost everyone. It also shoots just as softly. As with all gas guns, the 11-87’s internal parts “store” recoil and then release it, spreading out the kick and turning it into a mere shove. A satin walnut finish and cut checkering replaced the glossy finish and pressed fleur-de-lis checkering of earlier 1100s. And the 11-87 came with interchangeable choke tubes, which made it the last word in semiauto versatility. When it came out, every other major shotgun maker was suddenly playing catch-up.

The side-by-side stablemate of the Winchester 101 over/under, the Model 23 was actually introduced in 1978, but in the early ’80s it was offered with the newfangled Winchoke system and thus became the first double gun with interchangeable choke tubes. Like its inspiration, the Model 21, the Model 23 is overweight compared with classic game guns. But it has 3-inch chambers and is durable. If you want a gun that will shoot forever and digest heavy loads without pounding you, a 23 fits the bill.

The gun was made in several styles and all gauges through the ’80s. The one I want is a very limited edition, the Model 23 Heavy Duck, an 81⁄2-pound, 30-inch-barreled, Full-choke field piece that I have seen repurposed into a target gun, which is what I would do with it. There was a 20-gauge Light Duck, too, and a scaled-down 28-gauge version of the Classic. Double-gun purists look down on the 23 as heavy and, well, Japanese, but we are just a little worse off without it.

The deserved rap on the Browning Citori is that it’s overweight for upland hunting. Browning answered that criticism in 1983 when it replaced the beefy Citori Sporter (which in those days didn’t mean a ­sporting-​clays gun) with the Citori Super­light, which has the Sporter’s straight grip and Schnabel fore-end but dispenses with its 3-inch chamber in exchange for about 1 pound of weight loss. As a result, the Super­light weighs under 7 pounds in 12 gauge, under 6 in 20; and unlike today’s alloy-framed Citori Feather, it has an all-steel receiver. It also sports a classic oil finish that doesn’t show dings as ugly white scars the way gloss finishes do. You can drag this gun through the bushes, and it still looks good. Early models had fixed chokes, but interchangeable tubes came along in 1988, making this already great upland gun even more versatile. A friend of mine has an early, perfect, oil-finished, 20-gauge Superlight that is nothing but a safe queen. I yearn for it, and it is not for sale.

In 1985 Heckler & Koch began importing Italian semiautos produced by a company known best for its motorcycles. Made far from Italy’s gun valley in Brescia, the M1 Super 90 came from the fairy-tale medieval town of Urbino in the Apennines, and it worked like no other shotgun of the time—by inertia. Benelli had made and sold shotguns before the M1 Super 90, but this was the first to incorporate a rotary bolt, which relieved stress from the receiver, allowing it to be built lighter, and to looser tolerances, all of which contributed to the gun’s legendary reliability. The Super 90 was the gun that started it all for Benelli and established inertia as an excellent alternative to gas operation. Old H&K Benellis have metal trigger guards in place of the modern plastic, and they can be unloaded without running shells through the action.

● Another good thing about the ’80s: There were still upland birds then. The Midwest was lousy with pheasants and quail; there were shrinking but huntable numbers of bobwhites in the South; and ruffed grouse held on in places like Indiana and Ohio. Those days are largely gone, and with them, the rationale behind the 870 Special Field. With its straight-grip stock and short barrel, it’s light, lively, and easy to handle in the uplands. It has the same Remington stock dimensions that fit almost everyone, and all in all, it’s one of the coolest 870s ever. It came in 12 and 20 gauge, in fixed choke and later in choke-tubed versions. It features cut checkering and a satin finish, and the incomparable slickness of 870s made in the ’70s and ’80s. I don’t need one for pheasants anymore, but I’ve got my eye out for one with choke tubes to use on turkeys.

Another Japanese classic double, the Parker reproduction was made in several grades and gauges at the Kodensha plant that made Winchester and Nikko shotguns, under a contract between Winchester and Reagent Chemical & Research. These were clones of original Parkers, with interchangeable parts, but with modern stock dimensions rather than the steep drop of many American doubles. If you’re a nitpicker, you’ll point out that the Japanese Parkers have cyanide case-colored receivers instead of the original, more aesthetically pleasing bone-charcoal case coloring, but otherwise, the guns are gems. They were popular, too, which made it even more of a blow when the manufacturer demolished its gun factory to expand its auto-parts operation. Parker reproductions have become highly desirable and collectible—so much so that the price I’m listing below may be out of date by the time you read this.

Beretta’s 300 series set the standard for semiauto reliability. The 302 was the first of these to feature a universal receiver with a 3-inch ejection port that could accommodate 23⁄4- and 3-inch barrels. You still had to buy separate tubes for light loads and magnums, but that was state of the art then, and today it is perhaps the gun’s only shortcoming. There was even a special A302 Mobilchoke model threaded for choke tubes, a rarity in 1980. The 302 was simple, easy to clean, and all but unbreakable. The 303, introduced in 1987, was basically the same gun, with standard screw-in chokes, redesigned receiver and fore-end, and enlarged gas ports. Hunters and shooters still prize the 303 for its no-fail dependability and soft recoil. At the time, the gun was so revered that Browning, which struggled to come up with a good gas gun of its own in the ’80s, put Beretta 303 parts together at its FN factory in Portugal and called the result the Browning B-80.

● This was probably the best deal ever offered to American shotgunners. It was certainly the best deal no one took advantage of. This BSS is a true, full sidelock shotgun made as close to the old-fashioned way as Miroku could make it. Patterned after an English Holland & Holland, it came with traditional chopper-lump barrels and rose-and-scroll engraving on its coin-steel side plates. The wood is nicely grained and oil finished, and the gun weighs only about 61⁄2 pounds in 12 gauge.

Of the ’80s shotguns I failed to buy, the BSS sidelock is the fail that hurts most. I wasn’t alone. Baby boomers didn’t start going gaga over side-by-sides until the 1990s, by which time the BSS sidelock, and its more affordable cousin, the BSS, were discontinued and their tooling destroyed. Only about 1,000 of these guns were made in all, and only about 200 in 20 gauge.