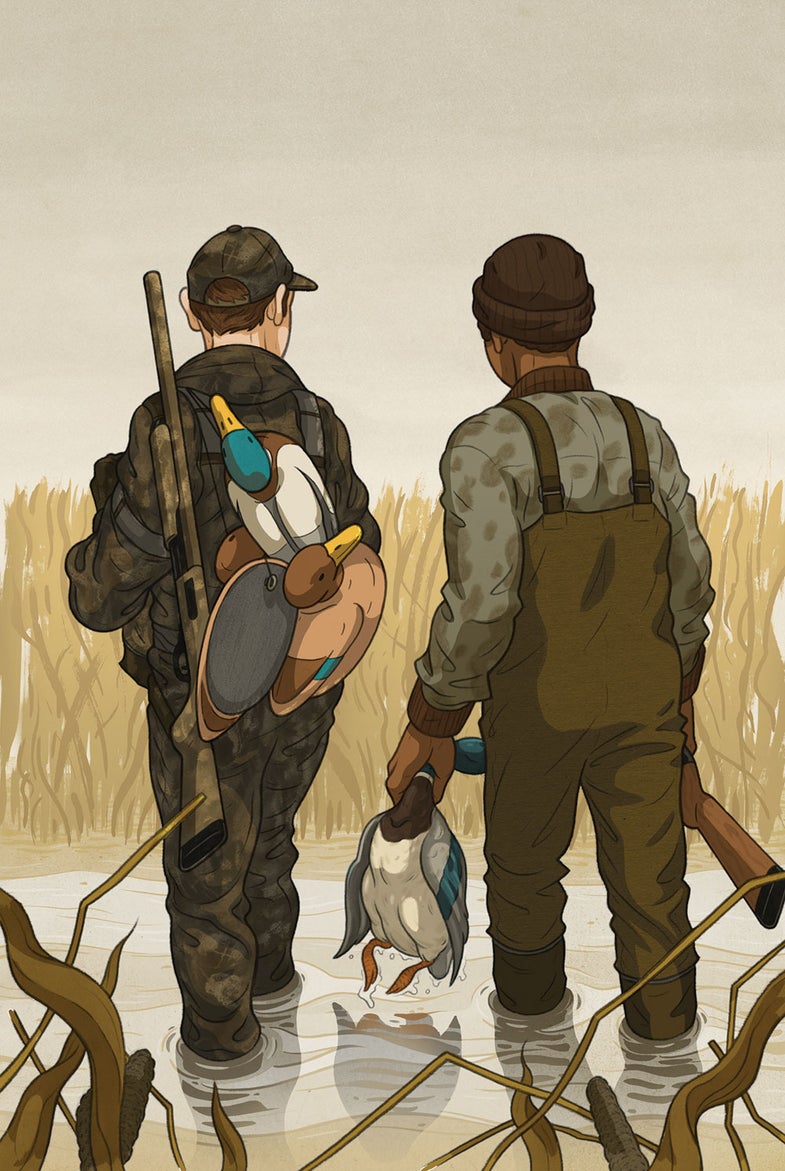 It was his jackleg float tube that really drove me crazy. I’d bought a brand-new camo belly boat for duck hunting—one of the first models that involved more than a ­Cordura-covered truck-tire inner tube—and my buddy Lee Davis and I had scouted the perfect duck swamp to give belly-boat hunting a whirl. When Davis showed up in the dark, however, he toted a Beverly Hillbillies version of my ride. He’d lashed a sky-blue boat cushion into the donut hole of a used inner tube from an 18-wheeler.

“Really, dude?” I said. “I got up at three o’clock in the morning for this hunt, and you show up with a yard-sale boat?”

He just grinned and easily bore it. ­Davis was used to being chided for leaning on gumption rather than gear. “Man, you don’t need all that new stuff,” he’d say. “Just tough it out.”

Just tough it out. That was his refrain, year after year. Long after the rest of the world had shifted to polypropylene thermal underwear, Davis sported 100 percent cotton waffle weave, despite the fact they stank like a goat’s belly after a few hours of hunting. He looked like the lumberjack on those paper towel rolls. I had to have every new flashlight on the market, while Davis was happy with his Rayovac that ate D batteries like jerky snacks. His decoys were anchored with a mishmash of U-bolts and railroad spikes. I swear I remember him once tying a decoy line to a can of beanie weenies. I spent a lot of time with Davis, standing in the dark, shaking my head.

I had Davis on my mind recently for a couple of reasons. For starters, I’d just finished cleaning up the last basement-floor mountain of hunting gear—a nearly waist-high pile of decoys, boots, tree­stand climbing sticks, fetid clothing, and candy bar wrappers that had accumulated like battery-­terminal corrosion over the last few months. Like many of us, I’ve wound up with a ridiculous amount of gear over the years, and I can’t wrap my head around why I keep every worn-out and outdated doodad.

In addition to postseason gear sorting, I’d also recently wrapped up reading a book about the ill-fated Donner Party, the Oregon Trail migrants who were snowed in along the High Sierras. They walked until their boots crumbled and their feet turned black. They ate their dogs, then their buffalo-hide blankets, then one another.

I’d never figured Davis for a cannibal, but there was no doubt he was cut from a different cloth than many. He’d played football in high school, a 5-foot 9-inch ­atlatl bolt in the cornerback position whom the local paper called “pound for pound the toughest player to wear the Yellow Jacket uniform.” He took that approach to hunting. He might not have had the best gear, or been the best duck caller, but he could outwalk, outpack, and outlast just about anybody. Hack through the worst beaver-swamp briers. Haul boats across the mudflats. Stay longer. Never complain. Not rely on stuff. Just tough it out.

What I noticed during all those years I hunted with Davis was that I had to rise to his level. It never occurred to Davis that maybe I was just average, so I grunted it out alongside. We pushed each other. No one was going to quit or cry uncle. I grew tougher—had to be—to hunt with Davis.

We’re lucky if we’re blessed with field partners who push us to levels of skill, endurance, and pain tolerance that we never would reach on our own. Another who’s inspired me is my pal Scott Wood. I’ve hunted with him when he was so sick that I had to pull over to the side of the road so he could puke out the truck door, wipe his face, then hammer down to the woods. Hard to tell a guy like that that you’d rather just catch a few extra winks in the morning.

Davis’s crowning achievement was his country-boy hack of the L.L. Bean Town and Country jacket. This was the ubiquitous tan corduroy zip-up coat with the knit sleeves and cuffs, designed for casual Fridays and lunch at the golf club. In Davis’s hands, it became a blank canvas for a D.I.Y. camo job. As I was salivating over the latest love child between Gore-Tex and Mossy Oak, he was in the hardware store aisle, loading up on Rust-Oleum spray paint in flat black and drab green. He went with a vintage pattern, accentuated with a few stenciled leaves. That coat looked like a mildewed rucksack and smelled like a chemical plant, but he wore it for several duck seasons, rain or shine. Wet, the jacket must have weighed 15 pounds, and I’m convinced that he wore it long after he probably wanted to. Same thing with the cotton long johns and the Levi’s jeans under his waders. Makeshift gear on the outside came to symbolize steely resolve on the inside. If you’re tough enough, what do you care for comfort and convenience?

Of course, Lee broke down eventually. Maybe he didn’t have anything else to prove. He bought a decent pair of waders, traded his old o/u for a semiauto, and even sported a few sets of synthetic underwear—although I’ve long suspected that he picked them from a ski-shop bargain bin.

But for many formative years during which I learned the limits of my own intestinal fortitude—not to mention the limits of my anterior cruciate ligaments—Lee would stage his gear at the edge of the railroad tracks, roll up a flannel shirt to show the waffle weave underneath, and hoist a pack of three dozen decoys that clinked with his junkyard anchors. I’d do the same, grunting, as he’d stop to turn around and shine that big Rayovac in my eyes and call out, “You coming, tough guy?”

Read Next: A Father-Son Fishing Trip Takes a Wrong Turn