A Cautionary Tale for Turkey Hunters

Why you really should pattern your turkey gun 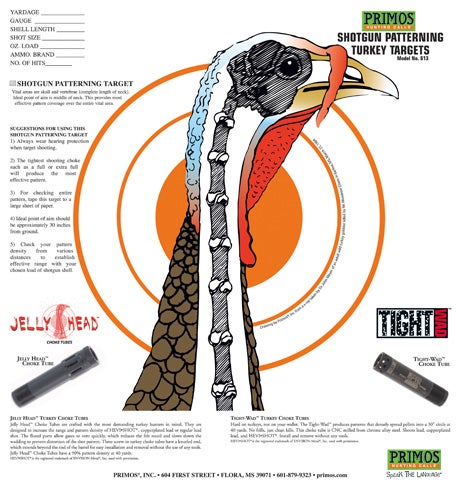 Don't be like Phil: Spend a little time with paper before you head out after turkeys. Courtesy of Primos
SHARE

Negative reinforcement is a powerful learning aid. You can tell someone, for example, that electric fences give a shock, or you can let them grab the fence. The former might help, but the latter will pretty much guarantee that they’ll steer clear of hot fences after that.

Sometimes we have to learn lessons like this in the field.

This season my friend Phil (not me, different Phil) decided to switch turkey guns after 15 years of shooting them with his Super Black Eagle. He bought a new turkey choke for his other gun, screwed it in, and went hunting.

On opening morning he took a 20-yard shot at a gobbler. Hit, but not killed, the tom flushed. Phil kept shooting, but being inside a popup blind made it tough for him to hit a bird going straight up. His follow-ups missed, but the turkey folded up and fell back to earth anyway, then stood up, dazed.

Phil loaded his one extra shell (this is how you know he and I are not the same Phil: I carry lots of extras, having learned that lesson the hard way) and shot over the turkey’s head. He saw the grass puff where the shot charge hit high.

He then ran out, grabbed the turkey, and tried to wring it’s neck. There was a struggle. The turkey got loose and ran. Phil, who is pretty fit but in his early 60s, sprinted after it.

“After 15 yards, I realized I wasn’t going to catch it,” he said, “So I dove.” As he left his feet he thought, Maybe this isn’t such a good idea.

He landed on the turkey, which he said was like landing on a feather pillow. He heard a crack beneath him, which he figured was the turkey’s neck breaking, and rolled off so he wouldn’t be beaten by flopping wings and spurs.

“I sat there for about 20 minutes wondering if I was going to have a heart attack,” he said.

The moral of this story: Pattern your gun. Later, Phil shot his gun at a paper target, and it hit about 8 inches high, just enough to put almost all the pellets over the top if you aim at a turkey’s head. I am guessing he’ll never take a gun turkey hunting again without first testing its point of impact.