For two friends, hunting Rio Grande gobblers in Texas isn't quite as much fun as skipping school to chase easterns used to be, but it's close 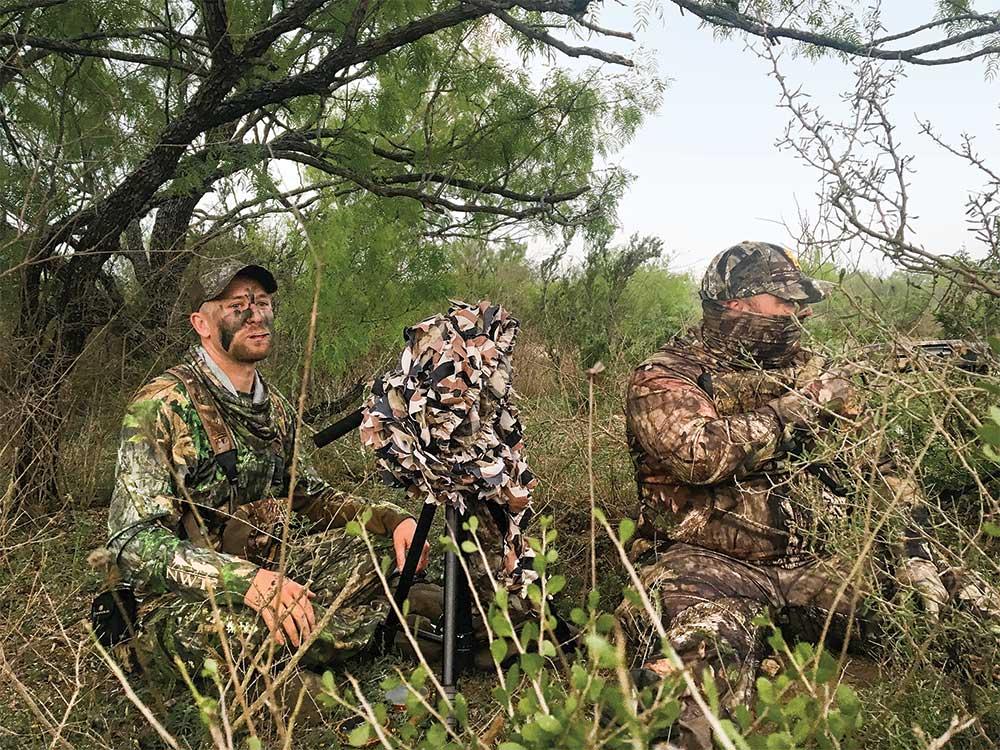 The alarm on my wrist­watch buzzed, signaling the point of no return. It was 7:30, and had Matt Seymore and I stood up and left the woods right then, we’d have gotten back to school just in time for first period.

We’d left the same turkey gobbling on the same ridge the previous two mornings and beaten the tardy bell. But I didn’t learn anything in class on either day that was worth leaving a gobbling turkey for.

My own tags were already filled that season, so I was trying to call in a first bird for my best buddy. It was almost as good as carrying a shotgun myself, but it wasn’t without its own problems. Seymore was top of our class, and damned if he wasn’t proud of it. Worse than that, he’d been recognized in elementary school—twice—for yearlong perfect attendance. He never recovered and, in fact, went on to maintain perfect attendance for seven straight school years. A lot of calm and clear April mornings passed him by in that time.

To me, the subject of truancy meant comparatively little during hunting season. I was a good student and didn’t make a habit of skipping school, but Dad had been pulling me from class to go hunting since the sixth grade. Once I got my driver’s license and a beater four-wheel-drive of my own, he had to warn me not to let my grades slip simply because it was turkey season.

When my wristwatch sounded, I was yelping on my Lynch Fool Proof and sitting against a tree 15 feet behind Seymore, who was looking over the barrel of his 12-gauge. The gobbler was less than 100 yards away—just out of sight beyond a rolling hardwood knob—and roaring at every note. Seymore heard the watch, which I quickly shut off, and he twisted his head, slowly and slightly, in my direction. I assumed he needed to take a calculus test or something and that we’d be leaving, but instead I could tell that he was smiling underneath his face mask. He’d been overtaken by wickedness, and that seven-year perfect-attendance streak was about to be broken. And it looked like the payoff would be carrying a wild turkey out of the woods.

That would’ve been a great story. But an hour after the decision to skip school was made, the tom’s gobbles faded and then finally stopped altogether.

“What do you think happened?” Seymore whispered.

“Pretty sure you scared him off.”

“Bull. I think your calling spooked him.”

I wanted to hunt the rest of the day, but Seymore said we were leaving. We walked into the front office of our high school decked in full camouflage. My adolescent complexion bore the evidence of hardcore face-paint use. I’d wiped away enough black grease so that Mrs. Parker, who oversaw the front office, could see the zits on my cheeks, but I had missed several black smudges under my ears and on my neck.

“Where have you boys been this morning? Sick, I guess?” Mrs. Parker asked.

“The turkey fever is bad this time of year,” she said with a smile, and handed a pair of admittance slips across her desk to us. “Now get your butts to class.”

That slip, from Wednesday, April 18, 2001, is yellow and faded, and it rides in my wallet behind my hunting license to this day. We checked in at 10:08 a.m., and Mrs. Parker marked it as an excused “unavoidable” absence. Bless her.

I’ve carried the slip for 18 years, though somewhat accidentally. I found it in a pile of expired hunting licenses when I swapped wallets a few years after high school and got a chuckle out of it. I decided to keep it. A bunch of hunting licenses—and a few new wallets—have come and gone, but every year in March, when I’m due to buy a new resident license for Kentucky and begin the year’s turkey scouting in earnest, I take that admittance slip out for a look. It’s a token of a good memory—but also a reminder of how, despite our best intentions, Seymore and I hadn’t hunted spring turkeys together again after April 18, 2001.

The reason is a common enough story of childhood buddies taking different paths, where staying in touch isn’t always easy. That was our senior year, and we left for different schools. Seymore settled on the Alabama coast, where he became something of a salt­water fishing bum (in addition to a successful attorney). We’ve managed to go fishing and duck hunting here and there, and we’ve talked a lot about getting back to the turkey woods after that first gobbler. Last spring, we realized 18 years had gotten away, and it scared both of us. There’d been enough talking.

I asked Seymore if he could tear away from work for a few days to go turkey hunting with me in Texas. I knew from the look on his face—overtaken by wickedness—that the answer was yes.

Mesquite and cactus replaced the dogwood petals and redbud blooms of the Eastern hardwoods, but South Texas still showed off a rich green that’s only seen in the springtime. Hints of light bled into the sky as we debated about the perfect setup in the dark. One of the ranch guides (tcoutfitters.com) had dropped us off and wished us the best of luck. He said he’d seen some strutters in the area but wasn’t sure where they were roosted.

A coyote howl helped narrow the search as a bunch of Rios erupted in shock gobbles 150 yards away. We stuck a couple of decoys in the sendero and hustled into the mesquite with only a few more minutes of darkness to conceal our final movements. We cut a good shooting lane through the mesquite thorns and settled in to listen to the new morning. The turkeys gobbled again, and Seymore leaned toward me. “You weren’t lying about them being noisy,” he whispered. “They sound like a bunch of hairdressers.”

I choked back a laugh. Eighteen years since we’d last sat down to a turkey together, and some things hadn’t changed at all. When we were kids hiking to a secret bluegill pond, stalking a hickory-nut tree full of squirrels, or cutting class to hunt turkeys, Seymore and I had always worked well and naturally together in the woods. Anyone who’s had more than a couple of hunting buddies knows how important it is to be in step on decision-making, when to keep quiet, and when to laugh.

Rios are fun, and they do tend to gobble a lot. But I have probably messed up on more of them per capita than any other subspecies. “Don’t be fooled by all the noise,” I said. “They’re still turkeys and will screw us over given half a chance.”

When the day broke, I made a few clucks and tree yelps, and the gobblers responded instantly. We then kept quiet, but the gobbling only grew more urgent and frequent. When we heard the slap of wings, I made a loud cutt and followed it with a long series of yelps. The toms cut me off—and they’d already covered half the distance.

“I see ’em,” Seymore soon whispered. Black forms moved alongside the far edge of the sendero, behind a grown-over fence that we hadn’t noticed in the dark. For a minute, I was afraid they might hang up behind the old fence—but then I realized I was even more afraid of this hunt ending too quickly. I couldn’t tell how many gobblers there were, but I didn’t intend to wait for a double. They paused for a bit to drum and display before belting out more gobbles that nearly got the best of us and caused a flinch.

“Man. Haven’t heard that sound in a long time,” Seymore said. His grip tightened around the shotgun as a longbeard suddenly strutted around the fence and into plain view 25 yards away. The tom spit and drummed, snowball head and red wattles tucked tight to his chest. As he approached our jake decoy, I heard the click of the safety, and the gobbler did too. He stretched his neck to investigate, and Seymore dropped him with a load of No. 4s.

“All those mornings we put in without getting one,” Seymore said. “All those close calls that didn’t work out. We skip 18 years, and then it happens in 30 minutes the first time we’re back out. Think it’s because we’re more patient about things now?”

“Could be,” I said. “Sometimes I look back at my turkey-hunting self in high school and wonder how I ever stopped calling long enough to shoot one.”

After taking photos and cleaning his bird, I mentioned the admittance slip in my pocket. “Mrs. Parker could’ve turned us in like the delinquents that we were, but she marked that absence as excused,” I said. “I guess to her credit, she knew we weren’t out selling meth. But do you regret breaking that perfect attendance streak to keep after a turkey we never even killed?”

Seymore shook his head, seemingly puzzled that I’d even ask. “Never have regretted it.”

Your teacher is going to say no if you ask to go hunting instead of attending class. I know this because my wife’s a teacher, my mom was a teacher, and Seymore’s mom was not only a teacher but also the school superintendent. Sharp, every one of them. It’s best to simply beg for forgiveness when you get caught—and to have a few good excuses on hand.

This is the classic. It helps to have a crooked doctor write an excuse, but if not, always feign a stomach ailment, and don’t spare any graphic details. No one will ask for proof.

Think of this one more as an omission of the truth. It’s technically not a lie at all if your alarm clock was set for 6:30 and you didn’t hear it because you left the house at 3:30 to get set up.

“This Isn’t a Real-Life Skill.”

I said this all the time about algebra and have never been proven wrong. On the other hand, being a good turkey hunter has helped my career multiple times over.

If you’re hunting swamp gobblers, it’s only a matter of time before this one becomes true. Who could blame you for trying to strike a bird while waiting on a buddy with extra tow chains?

This probably won’t save you from detention, but it’ll solidify your reputation as the the cafeteria hero, ­particularly if you marinate the nuggets in pickle juice before deep-frying them. —W.B