For your consideration, a gun vise and a riflescope (at a discount) 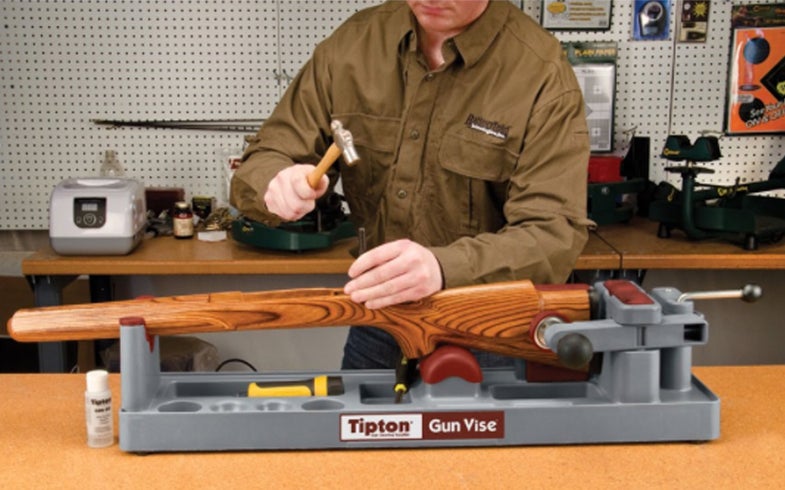 As rifle fore-ends continue to swell, bulge, develop odd lumps and protuberances, and sprout wens (look it up) of all manner, it’s gotten well nigh impossible to find a gun vise (not vice; a vice is looking at Fox News’ Abby Huntsman for hours and heaving long, shuddering sighs) that will accommodate them.

Most gunsmiths buy a machinist’s vise and make their own padded jaws, and Brownell’s sells a dandy vise that will do the job but costs $300. There are plenty of gun cradles available, but most of them include adjustments for working on handguns, shotguns, powerful assault rifles, 20mm Oerlikon anti-aircraft cannons*, making chiropractic adjustments, and strapping people down for lethal injections. I just want something to hold my tactical rifles and my powerful assault rifle while I clean them.

This is neatly answered by the Tipton Gun Vise, above, which will accommodate just about anything that goes bang, no matter how wide or knobby the fore-end. It has only one gizmo—a clamp that cams down on the buttstock from the side to keep the rifle from squirming while you go berserk with your cleaning rod. It’s solid, doesn’t skid along your workbench, and best of all, retails for $36 at MidwayUSA and $45 at Cabela’s (I got mine on sale at the latter for $27; Amazon also carries it for $36). Don’t confuse it with two other Tipton gun vises; they make a cheaper model that will not hold any rifle ever made, and a more expensive one as well. This vise is a very useful piece of gear that you’ll be able to afford even after Congress takes away your medical coverage.

When I got my .280 from Montana Rifles, I looked for a scope to mount on it and settled on the Leupold VX-6 2X–12X, which is the ideal magnification range for a big-game rifle that can hunt anything. The VX-6 is a top-of-the line model with every optical and mechanical refinement Leupold can think of crammed into it, and it has a zoom capability of 6 times, which takes you from Bad Breath Range to So Far Away You Can Hardly See It. Absolutely gorgeous optics; very good, but not great, adjustments; very modest size and weight for what it will do; and, of course, Leupold’s inimitable guarantee and repair service.

There is, however, a catch: The MSRPs for the VX-6 series run from $1,300 to just under $2,000, and I gather that was a little rich for people’s blood, so apparently the series is discontinued. Leupold’s website says the VX-6 is a “Past Product,” whatever that means. If it’s discontinued, why not just say so?

That’s the bad news. The good news is that dealers who have VX-6 scopes in stock are now unloading them at about two-thirds of the original price. I got one from Cabela’s and one from Natchez Shooter’s Supply at what you could call very substantial savings (you may also find it on Amazon). If you’re interested in a big-game scope, the other VX-6 that I’d consider is the 1X–6X.

There’s a choice of reticles, and I’d look for the plain old duplex, or the duplex with a red dot in the middle. I like red dots. They’re very fast to get on target and very useful in poor light.

If you’re looking for a high-end scope and you run across a VX-6 in a configuration you like, grab it. They’re so good you’ll want to write me a personal thank-you note. As Markus Friedrich Leupold said of the American shooting public, “Was zum Teufel wissen zie?”**, and you can profit thereby.

*Do not, however, let the BATF catch you cleaning your Oerlikon unless you have a Class III Dealer’s license, or they will send you to send you to a rehabilitative facility where you will be beaten twice a day until you die.