It’ll be a while before the geese migrate down South where the author lives. But right now, in their namesake land, the Canadas are everywhere 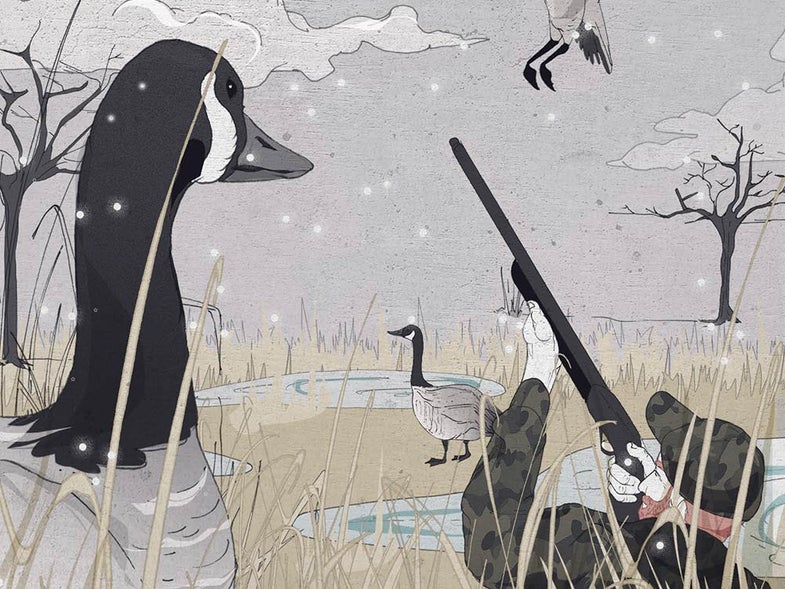 The geese honk, cackle, and moan, their calls ringing off the sheet water that forms amoebic patterns across the field. Echoes double each sound, and the din over the decoys brings to mind the ancients who hunted the ancestors of these same birds, in this same open country, long ago. Just a few miles away from this patch of barley, the two lobes of massive Lake Manitoba neck down to a rock-rimmed hourglass waist barely a half mile wide. To the aboriginal Cree, the crash of lake surf on the narrows’ limestone bluffs was the beating of a giant drum by their great spirit, Manitou. Now I lie in a row of raked grain, elbows soaked from the muck, surrounded by the haunting sounds of past and present.

I check the gun safety, make sure the muzzle clears the blind doors, and snug the shotgun butt into my shoulder. Sixty yards away, the geese call to one another and to the decoys and I grin, because they are calling, too, if unaware, to us: It’s October in Canada, they say, with snow in their wings, and here we come.

Just yesterday I rolled into Manitoba with the remnants of a decent summer tan, since we were still shooting ducks in short sleeves back home in North Carolina. We’d had a few cool mornings but only hints of the winter to come. Yet, it’s that time of year when we know the world outside is about to transform, when migrations, breeding seasons, and heavy feeds before cold weather fill skies and streams with game and fish. Each pressure ridge and weather system holds promise from the north. From now to the end of January, I’ll monitor the weather with an obsession, watching for each push of ducks and geese. Waiting.

But in Manitoba, there’s no need to wait. I’m 1,500 miles from home, and the birds are here—bred here and born here—and getting restless. Manitoba barley or the peanut fields back home, here they come.

“Look at them maple-leafing over there, on the left,” whispers Cory Dukehart, from the layout blind to my right. It’s morning on the first day, and we’re wired with anticipation and jitters. Dukehart is a diehard goose chaser from Maryland, with an impressive repertoire of double-clucks and sick goose growls, but like me, he rarely hunts honkers in their namesake country. The geese pitch and flutter. “Holy cow, that’s pretty,” he says. “Back home I sit around for months waiting on the geese to show. To meet them on their way—I could never get tired of this.”

And it’s not just honkers. Greenwing and bluewing teal ping-pong across the horizon like gnats. Mallards and gadwalls call. Someone knocks a Richardson’s cackling goose from a flock, and we pass the pint-size goose down the line. Its body is blockier than a Canada’s, with a stubby bill that seems more fitting for a pintail. From that moment on, I scan each ragged line of geese for the welterweights. Cacklers breed in the far northern tundra—I’ve watched them on their cliffside nests towering over the Seward Peninsula—and downing that bird would be a highlight.

Timing is only part of the equation here. “We’re in the bottleneck of this enormous lake, but that’s only one reason we get so many geese,” outfitter Blair Olafson explained earlier, riding herd on hunters crowding the bar at his Narrows West lodge. “What you can’t see is all the water behind every piece of woods you see.” Water sprawls across this boreal forest landscape, and we’re right in the middle of it.

Which might explain why the birds are having a hard time making up their minds this morning. The geese rise over the horizon, fringed with spruce woods and suffused with fog, but they seem uncertain. There’s steady shooting, but we’re picking at the edges of the flocks. Flight after flight give us a look and a decent chance, but few commit. Birds fall, but we know just how over the top it can get here.

“Embrace the struggle,” Dukehart says, and he’s right. When it all comes together, you can only feel deserving if you’ve asked nothing of a hunt but a ticket to the show.

That’s how the trip ends the next day, which turns out to be the day to be there, the day by which to measure all the others. The birds come up fast over a fringe of poplars at peak yellow color, white-barked trunks leaning in a 20-mph wind, and they fall quickly. One flock back-flaps so close I can make out the toes on their webbed feet and see a little slice of sky behind their bills as they honk. We drop six out of seven and still they come. We’re not 90 minutes into the hunt when everyone in the group has limited out. Except for one.

“Oh, yeah!” someone yells down the line. “We all get to watch the writer shoot now.”

In the blind, I grimace. I’m game, but for good reason I don’t like to shoot with an audience. When I whiff the first shot, the line howls and hoots. I hunker down. The birds come and come, and for once, there’s no rush. I let five flights cartwheel over without a shot. No one minds. No one wants to leave. Matt Coffey of Ducks Unlimited offers a benediction to the sky. “Beautiful,” he says, quietly. “Just beautiful.”

I shoot the last goose as the snow turns to sleet, pitter-pattering the blind. The bird thumps to the ground like a bag of rice, and for a long moment no one moves. The hunt is over, but we are lying under a Manitoba sky, in the wind and snow and sleet, swathed in hedgerows of barley. As far as we can see, the geese are still coming, pulled from the most remote corners of Canada, and we lie there knowing where they are headed, tomorrow and the day after: south, to a place where we might meet again. Home.

Streamlight’s Bandit LED Rechargeable Headlamp ($25; amazon.com) is tiny, light, simple, weather-resistant, and bright—just what you need in the tight confines of a muddy layout blind. The LED light recharges with a USB cord, so you can easily power up on the drive to the field.