Want to change up your summer vacation? Head to South America for a mixed-bag wingshooting adventure 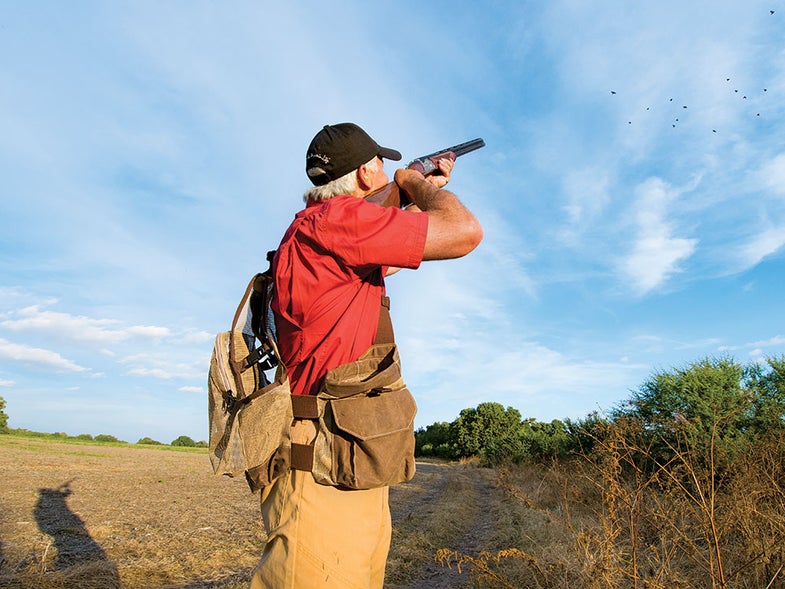 For a second I regret bringing the o/u. When ducks come nonstop, a break action is always open at the wrong time. But it truly doesn’t matter. If I miss one opportunity, the next bunch of teal will strafe the shoreline in a matter of moments. Raul keeps us in ammo. During rare lulls, he pours coffee. Life is very good right now. It’s June, and I’m shooting ducks.

When it’s summer in the States, it’s hunting season below the equator, and there’s no better escape from our long, hot off-season than a mixed-bag wingshooting adventure in Uruguay or Argentina, where I was this month last year. You can shoot doves year-round in South America, but from May through early August, pigeons and perdiz are also in season. So are ducks—up to 13 different species, only one of which, the cinnamon teal, you’ve likely ever seen before. Waterfowl limits are high: 20 ducks per day in most of Argentina, while in Uruguay your outfitter will typically cut you off at 75 or 100 shells per hunt.

You’ll hunt ducks in the mornings, unless you hunt perdiz, jumpy little pastureland birds that run ahead of pointing dogs like pheasants. The limit is 10, the walking is flat and easy, and you might see 50 of them on a good outing. Dove hunts are afternoon affairs, near a roost. You’ll see birds by the thousands and can burn two to three cases of shells in a couple of hours.

Sound like a better way to spend a few summer days than playing golf? It is. Want to go? Here are five things you need to know first.

1. Take Two
I made the mistake of bringing just one gun on my first trip to Uruguay, and after it broke I was reduced to bumming extra guns from other members of my group. If you want to shoot with your own guns, take a pair. Twenty-gauge gas guns or Benellis make good choices, as you’ll shoot lead shot at everything and the ducks are mostly at close range. If pigeons are on the agenda, think about bringing 12s or at least a 12, as shots tend to be longer.

Bringing guns into Uruguay is fairly easy; Argentina, not so much, as there’s more red tape. In either case, you will have to register your guns (and any other expensive items, like cameras) with U.S. Customs on a form 4457 before you leave the country. Or you can skip the hassles and rent a gun. Most lodges have a fine selection of Berettas and Benellis.

2. Dress for Success
The weather is usually mild, with lows in the 40s, highs in the 60s. Hip boots suffice for most duck hunting. Comfortable leather boots are the way to go for upland and dove hunting, although you could do either in tennis shoes. Shooting gloves come in handy in the dove field. Ear protection is essential for doves and ducks.

3. Be Snappy
It’s no longer possible to bring birds home either for taxidermy or dinner, so the trophies are memories and pictures, like the ones I have of a young gaucho who appeared out of nowhere, rode his horse into the marsh, and picked up ducks for us. Keep a camera handy and use it. Don’t worry, birds don’t go to waste. You will eat some of your bag there and the rest will be donated to the needy, of whom there are many in South America.

4. Enjoy in Moderation
There will be wine at lunch. It’s not how we do things here, but you’re not here, you’re in South America. Enjoy in moderation if you want, nap before the afternoon hunt, and you’ll be fine. As for the meals themselves, moderation is a poor idea. You’ll be fed a mix of grass-fed beef and game. The cooking is European style and outstanding. If you lose weight on this trip, you’re doing it wrong.

5. Save Your Pennies
Although I can’t think of a better summer vacation, I can think of cheaper ones. Mixed-bag hunts typically run between $4,500 and $5,500 for four and a half days of hunting, and that doesn’t include airfare from the U.S. to Buenos Aires or Montevideo. Tips are discretionary but might cost you $100 to $120 a day. You buy ammo there for $15 a box or so.

I have hunted with David Denies and Trek Safaris, which offer hunts at a number of lodges in both countries; and at Los Ombues in Argentina. All three were wonderful. You can save money by booking two full-day and two half-day hunts, as I did last summer, but I would have liked one more day given that travel down and back is a haul. It’s an eight- to 10-hour overnight flight to South America, and it’s often a longish drive to the lodge. But it’s all worth it from the moment you arrive.

On my last trip, I was greeted by staff bearing trays of mimosas. On the trip before that, my group arrived late in the afternoon at Los Ombues. Owner Carlos Sanchez’s first words were: “Hurry up or you’ll miss a hunt!” He hustled us into boats that carried us up the Parana River for an evening shoot. I’m not sure which was a better way to start a South American adventure. But I can tell you that both beat not hunting in the summer heat at home.

If you bring your own shotguns to South America, you’ll want to protect them in a serious case, and Pelican’s polymer 1750 Long Gun case is about as durable as they come. You can now take that quality case to an even higher level by ordering custom-cut foam padding from pelicanfoam.com. Simply upload a picture of your gun(s) to the website and paste the picture onto a mockup image of the case. Pelican then custom-cuts foam so that your gun(s) will nestle down into it perfectly ($321 for the 1750 case; $140 for custom-cut foam padding). —P.B.