The New Jersey emergency crew dispatched to rescue a deer stuck on a frozen pond ended up needing a rescue... 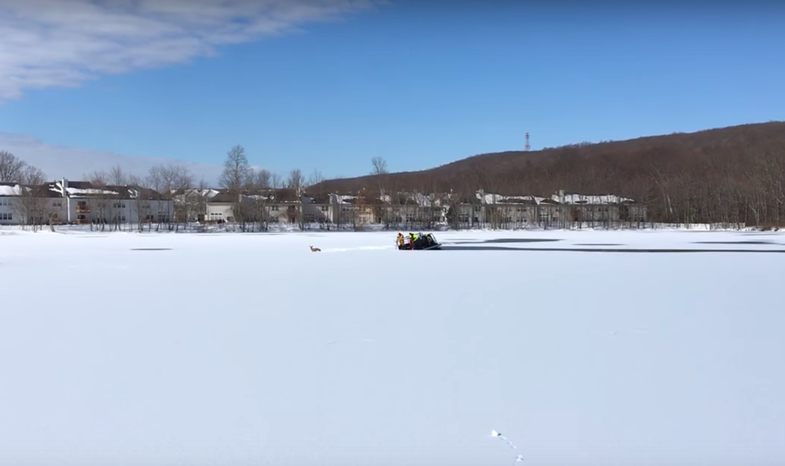 The New Jersey emergency crew dispatched to rescue a deer stuck on a frozen pond ended up needing a rescue of its own.

The crew of five used a water-tested vessel to get to a deer floundering on a neighborhood pond. Just before they reached the deer, the amphibious craft sank sending the rescuers into freezing water.

According to NJ.com, the $100,000 ice-cutting watercraft sunk because the bilge filled with water without the crew realizing it.

“We’re guessing the water was going in quicker than the bilge pump would pump it out,” says Scott DiGiralomo, Morris County Emergency Management Coordinator. “The water came into that area and we couldn’t see it and couldn’t tell until it hit a critical point where it impacted the buoyancy of the unit.”

USA Today reports, additional rescuers retrieved the crew and the deer, but police say from the get go the mission was more of a prevention mission than a wildlife-saving one.

“If this wasn’t behind a condo complex and it was in the middle of the woods, nature would just take its course and the deer would either get out or it wouldn’t,” says Marc Palanchi, Roxbury police chief. “But here, when you have people seeing it, [there’s] fear of them acting on their own, which was very likely, I’m sure. They had a guy on his way to get a boat. I think that’s what spurred the decision. It wasn’t necessarily a mission to save the deer. It was a mission to save people from putting themselves in jeopardy and then them needing to be saved.”