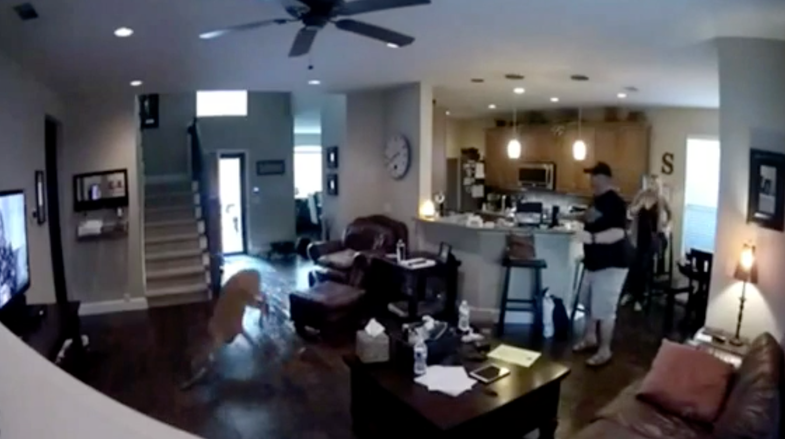 The deer was in the home for under a minute before making its way back out the front door, but to the homeowners it felt like forever.. Courtesy of WFAA
SHARE

The Stubbe family was abruptly interrupted as they sat down to dinner when a deer crashed through their glass door, rousing the family dog and sending the house into disarray as it struggled for footing on the slick floor. Homeowner Jeff Stubbe stared in disbelief at the young doe in his living room, unsure of how to remedy the problem.

According to WFAA, the dinner crasher barged into the Stubbe’s McKinney, Texas home last week. A security camera aimed at the front door recorded the reckless stunt that left blood around the doorframe but didn’t break the glass.

The deer floundered on the family’s wood floor for about 30 seconds before leaving the way it came in. Local animal services caught the deer, but it didn’t survive.

“We’ve lived here for 13 years and have never seen a deer,” Stubbe told NBCDFW. “We’ve seen bobcats and coyotes, but never a deer. Absolutely the most bizarre occurrence ever.”

Though certainly unusual, deer crashing through doors and into homes is not unheard of.

Just late last year, teenager Ryan Manchester made the news for his unlikely deer encounter. According to USA Today, Manchester was eating cereal in his kitchen when an adult deer broke down the front door of his family’s Frederick, Maryland home, toppling the Christmas tree and damaging furniture. This deer never made it out of the house though: Manchester, fearing for the safety of himself and his dog, called 911 and his father before grabbing his dad’s shotgun and dispatching the animal—his first deer—with a shot between the eyes.