A doe stuck in a frozen river lived to see another day thanks to Facebook and an ex-firefighter. CBC News... 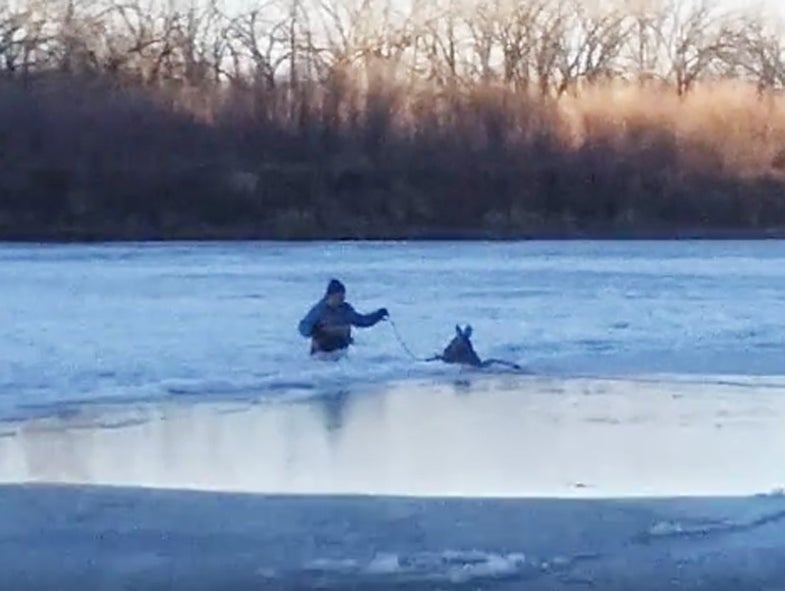 A doe stuck in a frozen river lived to see another day thanks to Facebook and an ex-firefighter.

CBC News reports that Matthew Todd Paproski saw a Facebook video of a worn-out deer stuck in a frozen river near his home, in Alberta, Canada. Paproski then gathered his rescue gear and headed for the water.

“It was stuck in the water, and it was just so helpless-looking; we had no choice but to help it,” Paproski told CBC. “The deer was clearly in distress. The people on the shore watching were in distress, and we could do something.”

Relying on his firefighting experience and employing a makeshift rope and belay rigging system, Paproski made his way onto the ice. When he did, however, the doe tried to move farther away. Paproski ended up jumping into the water and getting behind the deer so that he could steer the animal toward shore. The icy water reached the top of Paproski’s hip waders as he wrapped rope around the deer and had it pulled in. Eventually, the deer gained footing and ran off.

“It looked like we had a good opportunity to be successful at it, so it was worth doing,” Paproski said. “She just went running to shore and just about as she got to shore, she slipped and had to slide on her bum a little way, but she got back up again and away she went.”