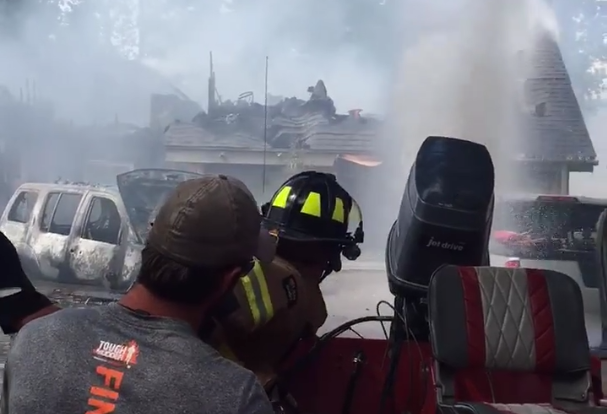 Jason Hunt and Beau Bishop originally arrived in Texas to evacuate flooded homeowners by boat, but ended up at a house fire after spotting some black smoke. The local crew was chest deep in water with no hose pressure to douse the fire. So The Arkansas firefighters strapped a jet boat to a tree and let the motor rip. “Just an old duck hunter trick,” Bishop, a firefighter and outdoorsmen, told Ozarks First. “We’ll pin our boats to a tree in the woods and we’ll blow the ice out using our boat motors, so I thought it would be worth a try.”

RELATED: How Three Fishing Guides Risked It All During Hurricane Harvey

According to The Washington Post, crews had hooked hoses to a hydrant they eventually found underwater, but got nowhere with spray pressure. The propulsion from the jet-boat motor did the trick by creating what fire departments call a deck gun. “Tried that out and it seems to be working very good,” said Jay Dillon, Houston Fire Department senior captain. “We were able to knock down a majority of the fire in the main house.”

Ducks Unlimited recommends trying the motor method on your next duck hunt and considers the technique among one of the best ways to keep your hunt ice-free in winter.