The Maryland DNR first got the call on January 19—a deer wearing a plastic snack barrel on its head near... 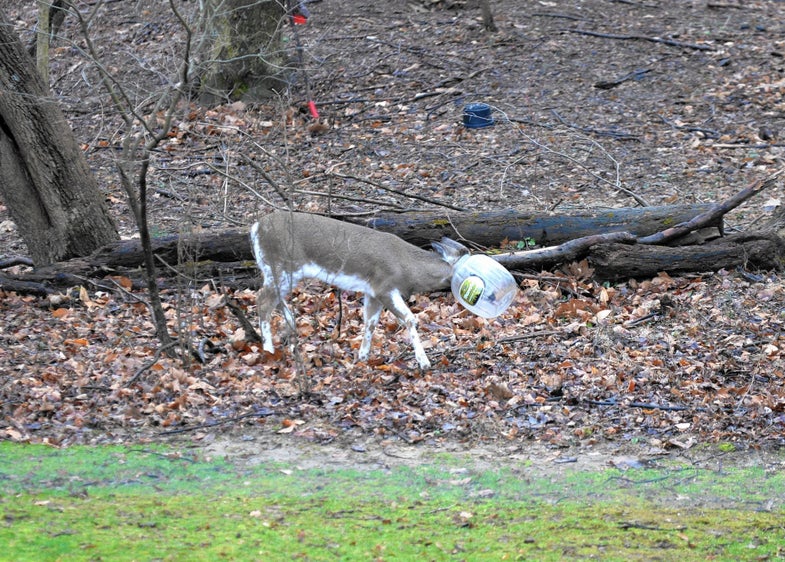 The Maryland DNR first got the call on January 19—a deer wearing a plastic snack barrel on its head near the town of Bel Air. There were a number of sightings reported on the neighborhood listserv. A biologist dispatched to the scene quickly confirmed the reports, according to Paul Peditto, director of the state DNR’s Wildlife and Heritage Service. “The jar was just kind of pressed onto its nose and forward part of the face,” he said. “We would have darted him then if we could have. But it was windy and you have to get pretty close. Unless you know you can hit a large muscle, you could lung the deer or puncture a hole right through it.” At that point, biologists were hoping the deer might yet knock the jar off on its own.

People in the neighborhood and the DNR biologists kept tabs on the deer over the weekend. Neighbors began referring to it as “Jughead” online. “We were essentially hunting this deer, showing up at sunup and sundown,” Peditto said. The deer was soon sighted with the jug wedged further up its head, past its button-buck antlers. It’s future wasn’t looking good.

I’m one of those people who believe that no creature on this earth should die with its head caught in an oversize plastic pretzel jug, regardless of political affiliation. And apparently I’m not alone, because the good people of Bel Air and the state DNR personnel did not flag in their efforts to save Jughead. The good news was that the deer wasn’t moving much, probably due to prolonged windy conditions, decreased sensory abilities, and fatigue. I’d guess self-consciousness also played a role. It’s hard for anyone to look good with a plastic jug over their head. The bad news was that prolonged stress was making accurate darting ever more critical.

By the next weekend, the DNR had two hunters with dart guns in treestands and a third on the ground. Sunday evening, the regional director sighted Jughead, stalked to within 30 yards, and darted him cleanly. (The guy has to be a hunter. That’s my thinking, anyway.) The deer was down 15 to 20 minutes later. The mouth of the jar was of such heavy plastic that pruning shears were needed to cut through it. The buck was awarded a set of ear tags and given reversal drugs. Ninety minutes later, it was up and on its feet. At least one neighbor has seen it since then.

You could argue that the life of a single deer isn’t worth that much time, money, and effort. But you’d have a hard time convincing me. The story of Jughead is about more than one deer. It’s also about us and what we value.