Why is it that guys who survive a near-death experience almost always declare that they have no intention of changing... 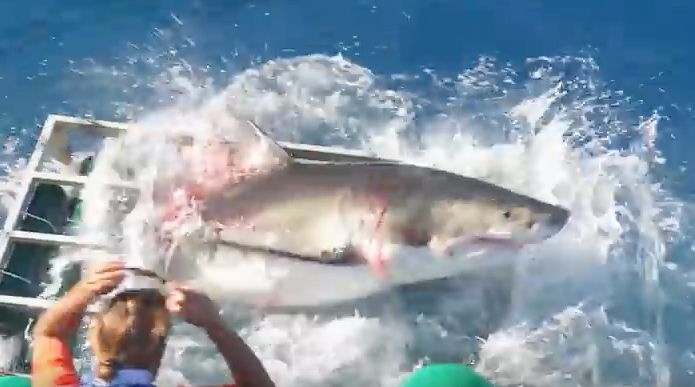 Why is it that guys who survive a near-death experience almost always declare that they have no intention of changing their behavior?

You always knew there was something that didn’t quite add up about getting inside a cage while great white sharks went into a feeding frenzy on the hunks of fish tossed overboard by your friends safely on deck. Now you know why. On the trip in this video, a shark the size of a Yugo breaks into the cage as if it were made of soda straws. It happens just 7 seconds into the video. For the horrifying next 16 seconds, it’s not at all clear what’s going on. There’s a lot of churning water, some blood—either from the bait, the diver, or the shark—and then a worrisome absence of air bubbles. As if the diver perhaps no longer has any particular use for air.

In the background are the voices of strangely disinterested onlookers. A voice can be heard saying, “Uh-oh,” in a singsong tone when things start going wrong. Another says, “Oh, my God,” as if he’s not actually present but watching another YouTube shark video at his desk. “Is anybody in there?” asks someone else, as if he’s talking about a bathroom stall rather than a shark cage. It’s all extremely weird. The dissociation of the onlookers is, in its own way, as terrifying as what may be going on in the shark cage. There’s something in their voices implying that their chief worry is not whether a man is being eaten alive, but whether this means the boat will be late returning to the dock, which could seriously screw up their dinner reservations.

In the meantime, a crew member has the presence of mind to open the top of the cage. Twenty-three seconds into the video, we see the huge, shaking head of the shark rise from the water. It wriggles and thrashes, eventually swimming out the top and clear of the cage. For the next 20 seconds, we hear speculation about whether anyone is in the cage or not. Finally, the diver’s head appears. He is helped aboard. He is okay. Everyone cheers.

Ming Chan, the client inside the cage is, according to an ABC News account, an experienced dive instructor who “remained calm” during the incident. (How this was verified is not specified.)

Chan’s love of diving in bait-bloodied water with great whites protected only by a flimsy cage is—naturally—undiminished. This encounter happened two days into a five-day trip out of Ensenada, Mexico. Asked by the NY Times whether and when he had—or intended to—go diving with sharks again, he replied, “The next day. I felt so lucky. Why would I be scared?”

I can think of a couple of reasons.