They don’t call Centre, Alabama the “Crappie Capital of the World” for nothing. “Hook Shots” host Joe Cermele joins crappie... 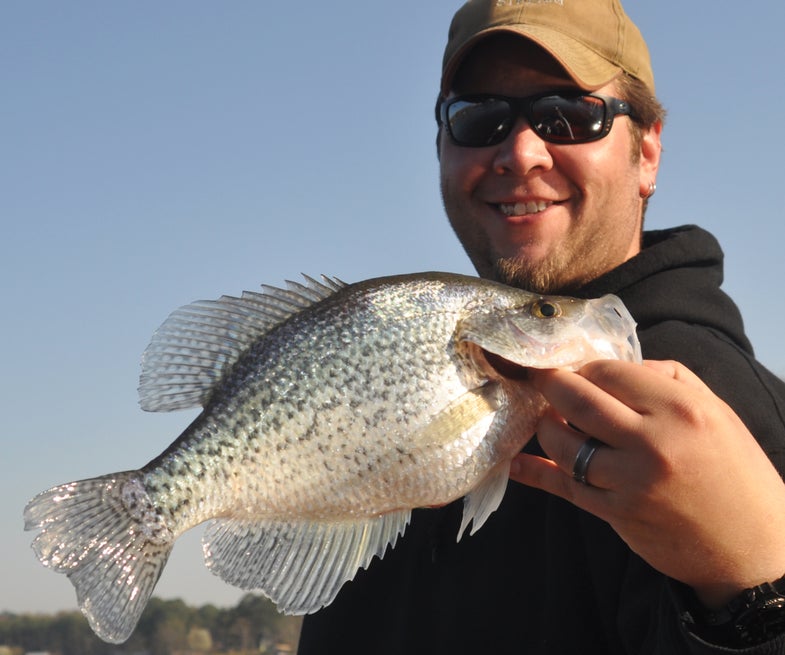 They don’t call Centre, Alabama the “Crappie Capital of the World” for nothing. “Hook Shots” host Joe Cermele joins crappie tournament legend (and wild man) Sam Heaton and veteran guide Jack Jones on Weiss Lake to learn the ins and outs of crappie trolling. Cermele soon finds out that crappie fishing in this part of the country has a cult-like following, and the ‘Bama fish fry is practically a religous rite of passage.****

The Deal: Located on 447-square-mile Weiss Lake, Centre, Alabama is hailed as the “Crappie Capital of the World.” Every season, thousands of anglers travel to this man-made body of water to cash in on the thriving crappie population. Featuring white, black, and hybrid crappies, Weiss gives up fish hitting the two-pound mark with astonishing regularity, with a good number of three-pounders caught each year. The current lake record stands at just over four pounds.

When To Go: Weiss Lake produces crappies all year long, but prime season runs from mid-March to mid-April. When the water reaches 62 degrees, the fish move shallow to spawn, offering anglers the chance to attack with jigs and corks. But prior to the shallow migration, the crappie stage pre-spawn by suspending in ten to 15 feet of water along sloping bottom and old river channels. It is during this time that trolling reigns on Weiss, and fishermen in-the-know can pound schools marked on their fishfinders until each man brings his 30-fish limit over the rail.

What To Bring: Where rods are concerned, you can really troll with anything, though crappie legend Sam Heaton opts for five- to ten-foot designated trolling rods designed to widen the spread and cover more water. Six-pound-test monofilament gets the nod when spooling up. Marabou jigs ranging from 1/64-ounce up to a 1/4-ounce are a favorite of Heaton’s, though tubes, small paddle-tails, and curly-tail grubs all work well. Perhaps the most important thing you need if you’re trailering your own boat to Weiss Lake is a battery that will run your trolling motor all day. A good fishfinder and GPS to quickly mark the spot when a line gets hit also come in handy.

How To Fish: Heaton trolls at less than a mile-per-hour, keeping all of his rods low to the water to increase depth and reduce line bowing when the wind blows. Fishing two jigs staggered on one line is common, and it is positively essential to change jig colors and weights frequently until you’ve figured out the pattern and best depth. As soon as you hook a fish, raise the rod high and reel it to the surface to stop it from tangling other lines. Though many anglers opt to hold their rods on the troll, Heaton claims you’ll boat far more fish by leaving them in the holders and letting the crappies hook themselves.

Where To Fish: There is no shortage of public boat ramps around the Weiss Lake, as well as some public land where shore fishing is an option. In March, focus on coves off the main lake with depths of ten to 15 feet. If you have a water temperature reading of 62 degrees or more, docks and shallow areas with stumpy bottom are prime. You need not be a reuglar to find both types of structure, as they are more than plentiful.

Where To Stay: Given the popularity of Weiss Lake, motels and campgrounds abound, but if you want to crash at the premier on-the-water venue (complete with boat ramp, cleaning station, and tackle shop), book your stay at Bay Springs Motel and Campground.

Guides: Unfortunately, Sam Heaton and Jack Jones, who were featured in this “Hook Shots” episode, sort of came out of guiding retirement for our video shoot. They may not be available, but don’t worry, there are plenty of reputable guides on Weiss Lake that will get you on the bite. We recommend: