“Hook Shots” episodes may be filmed all around the country, but in the fall host Joe Cermele prefers to stay... 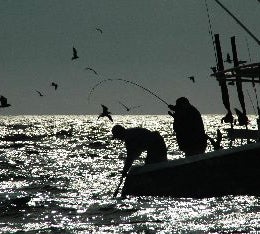 “Hook Shots” episodes may be filmed all around the country, but in the fall host Joe Cermele prefers to stay right in his home state of New “Joisey.” As the bay waters cool, massive amounts of baitfish flush into the ocean, where migrating striped bass, bluefish, and false albacore make an interception. This is what the “fall blitz” is all about!

The Deal: Ask any Northeast inshore saltwater angler for their favorite time of year, and a large percentage will tell you it’s the fall. That’s because this time of year, cooling water draws a plethora of baitfish species out of the bays and into the ocean, where migrating striped bass, bluefish, and false albacore are waiting to make the interception. Sometimes this bait gets hammered on the bottom, but you are often greeted anywhere from Rhode Island to Delaware by acres of diving, squawking birds and a surface full of froth.

When to Go: Northern Northeast states, such as Massachusetts and Rhode Island, see the bulk of their blitz action in September and October. New York goes nuts in October and November, as does New Jersey, which can also see solid blitzes almost until Christmas depending on the water temperatures and amount of baitfish present.

What to Bring: Though some fishermen like to troll through blitzes, this action begs to be capitalized upon with light spinning gear or a fly outfit that can really reach out. Spinning outfits should be spooled with 15- to 20-pound mono, or 20- to 30-pound braid, as you never know if you’ll be hitting small fish or a loner pods of giant stripers. In the fly department, 8- to 10-weight outfits work well depending on the wind, and intermediate-sink fly lines are often favored. Small metal lures or soft-plastics, such as Deadly Dicks or Storm Shads, are rarely refused in a blitz. Likewise, white Clouser and Deceiver flies are hard to beat.

How/Where to Fish: What’s particularly nice about this kind of fishing is that a boat isn’t necessarily needed. Bird play and blitzing fish often find themselves within easy reach from the surf, though having a boat to give chase certainly comes in handy. Look for areas of rocky bottom or a trough, as they often attract the bait, and in turn, will be the site of a blitz when the gamefish show up. But all you really need to do is cruise tight to shore and look for the birds. Remember that birds sitting on the surface are a good sign that fish are close by.

Where to Stay: If you’re headed to the Jersey Coast to cash in on fall action, you’ll find plenty of motels still open (and offering cheap off-season rates). In North Jersey, check out the Fair Banks Motel in Sea Bright. If you’re chasing stripes in Central Jersey, you can’t go wrong at Seaside Park’s Island Beach Motor Lodge. It’s right on the beach, and just up the street from famed surf fishing haunt Island Beach State Park.

Guides: As seen in this episode, both Captain John Luchka and Captain Eric Kerber will get you into fall action along the North and Central New Jersey coast. Both are experienced guides who live for the sight of diving birds. If you’d rather fish the beach, Captain Kerber also offers guided surf trips.