Kicking off the 2011 season of “Hook Shots,” Joe Cermele heads to chilly western New York with his uncle to... 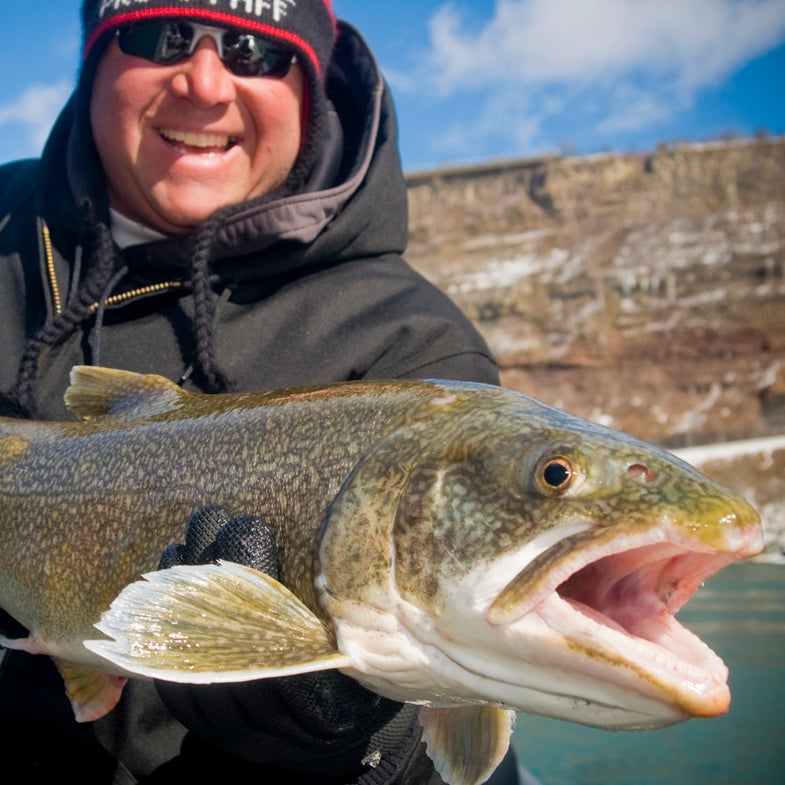 Kicking off the 2011 season of “Hook Shots,” Joe Cermele heads to chilly western New York with his uncle to relive an epic trip that ended in frostbite…and lots of monster steelhead. Only this time, Joe’s after the Niagara River trout slam; steelhead, lake trout, and brown trout.

The Deal: Every fall, hundreds of thousands of steelhead, lake trout, and brown trout migrate out of Lake Ontario to winter over in the Niagara River. This is a massive body of water, moving millions of gallons of frigid winter water through a deep canyon every minute. The river is loaded with swirling whirlpools, massive boulders, and steep drops, but the potential for big trout is its most impressive feature.

When To Go: The Niagara River trout season kicks on in October and lasts through April, if not longer depending on the water temperature. The lakers and browns spawn in fall, and the steelhead spawn in the spring, but they’re all stacked on the bottom during the coldest months of the year, and they’re all hungry.

What To Bring: If you bring nothing else, bring warm clothes…very, very warm clothes. Temps in January through April can be in the 40s or in the negative teens. Good gloves and boots are perhaps the most essential. Otherwise, light conventional outfits featuring rods with a sensitive tip get the nod. Eight- to ten-pound test mono works best, as braid has a tendency to hold water and freeze. Bring lots of hooks, swivels, leader, and pencil leads, because you’re going to lose a lot of rigs in the rocks.

How To Fish: The winter trout fishery is very akin to saltwater bottom fishing for tautog or black seabass. You want to keep a tight line, fishing as vertically as possible to feel every “tick” off the bottom. You’ll learn quickly to note the difference between bumping a rock and get tapped by a trout. Steelhead egg sacks and live emerald shiners both crush fish when presented on a small octopus hook.

Where To Fish: There are a few places on both the New York and Canadian side of the river where anglers are successful from shore. But to up catch rates, launch a boat (or hire a guide) from the New York town of Lewiston. Depending on the weather conditions and water temperature, the bite can be better in slower runs along the shoreline, or the faster, swirling water found upstream in the gorge.

Where To Stay: There are several motels in Lewiston, but perhaps none are more reasonalby priced and fisherman-friendly than the Riverside Motel.