Have you ever dreamed of becoming a professional bass angler? “Hook Shots” host Joe Cermele has. So when Elite Bass... 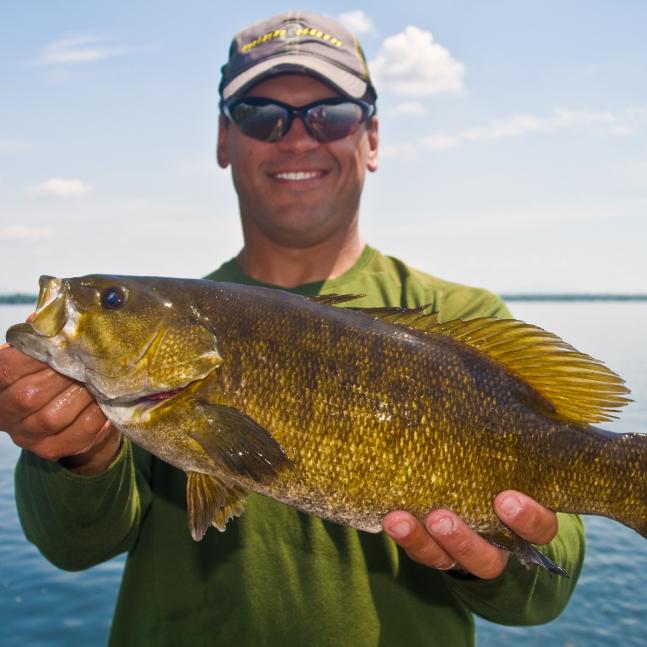 Have you ever dreamed of becoming a professional bass angler? “Hook Shots” host Joe Cermele has. So when Elite Bass Pro Dave Wolak invited him to fish the practice days prior to the FLW EverStart Tournament on New York’s Lake Champlain, Cermele jumped at the chance. What he learned in this crash course is that being a bass pro takes more than just a love of fishing.

The Deal: Lake Champlain in the Adirondack Mountains touches the shores of New York, Vermont, and Canada. Given that the lake is more than 100 miles long and 14 miles wide at its widest point, there is plenty of room for bass chasers to roam. Champlain is regarded as one of the top bass producers in the Northeast, and it hold loads of both trophy largemouths and smallmouths.

When To Go: Barring the coldest months of the year, there really is no wrong time to visit Champlain. Many locals cite the days immediately following ice-out in March or April as one of the best times to find the biggest smallmouths at their most aggressive, though these fish keep rods bent well into the fall. If you enjoy fishing for largemouths during the spawn, plan a trip around mid-June.

What To Bring: There is almost no limit to the amount of tackle you can use on Champlain, but as a general rule, skip gear that’s too light, as you’ll be dealing with pretty big fish that will require a spinning or baitcasting rod with some backbone. A stiffer rod will also come in handy when one of Champlain’s giant pike finds your lure. Eight- to 14-pound-test monofilament gets the nod in most situations on the lake, and if you like braid, spool up with 20- or 30-pound-test.

How/Where To Fish: Flipping is a highly productive method for largemouths, especially early in the summer, as they bed in the vast pencil reed fields and around Champlain’s many docks and marinas. However, during the filming of this episode (mid-June), bass pro Dave Wolak concentrated on the jig and jerkbait bite for smallmouths. These fish were stacked on rocky points that dropped off quickly, and mid-lake high points with predominantly rocky bottoms. But conditions on Champlain can change in a flash and push fish around. Prior to a visit, keep a close eye on wind and barometric pressure trends, as these factors weigh heavily on the patterns and location of the fish.

Where To Stay: There are loads of hotels, motels, and campgrounds around Lake Champlain, but the highest concentration will be in the larger lake towns like Ticonderoga, NY, Plattsburgh, NY, and Burlington, VT. Likewise, these cities all have public boat ramps, though you can find them scattered all around the lake in smaller communities or in many area parks. Visit Lakechamplainregion.com or the webiste of Burlington, Vermont, Tourism to draw a tighter bead on lodging and a location that suits your fishing needs.