Prehistoric, massive, and wily are all words that describe the white sturgeon. Gut-wrenching, brutal, and back-breaking all describe the fight... 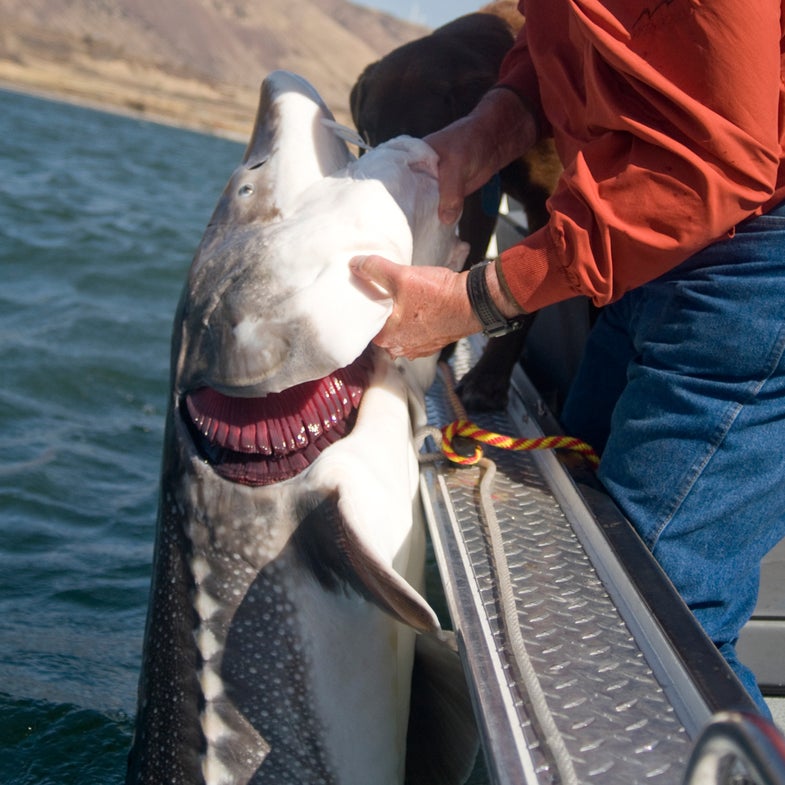 Prehistoric, massive, and wily are all words that describe the white sturgeon. Gut-wrenching, brutal, and back-breaking all describe the fight of the white sturgeon. Crank down on a 300- to 500-pound fish in the ripping currents of the Columbia River in Oregon/Washington, plus use heavy tackle suited to tuna to get the job done, and you might need a muscle relaxer when it’s over. See if “Hook Shots” host Joe Cermele could take the sturgeon pain (and handle the pressure of fooling some stubborn muskies, too).

The Deal: White sturgeon historically traversed freely from the Pacific Ocean far up the Columbia River. Though they can still do so, the many dams on the Columbia make it more difficult, even with fish ladders in place. But this highly protected species continues to thrive thanks to conservations efforts and stocking programs. While there is a short season that allows anglers to keep small fish, there is a strict “no kill” rule on the oversize specimens…of which there are many. Expect to commonly tangle with fish in the 200- to 500-pound range, but be ready when an 800- or 900-pounder latches on.

When To Go: Although the sturgeon are in the river all year, April through October marks the peak season. This is primarily because sturgeon are more aggressive than many people believe, and feed more heavily when other migratory species like shad and salmon are running thick. According to sturgeon ace Louie McMinds, August and September see greater numbers of fish, but the spring months can produce some of the heaviest.

What To Bring: You’ll want to bring a back brace and plenty of Advil for starters. Otherwise, the tackle for sturgeon is so out of the norm for freshwater environments, it’s best to let a guide provide the gear. Stand-up rods more often found on offshore sportfishing boats chasing marlin are the norm, as are 30- or 50-wide two-speed lever-drag reels. McMinds spools with 100-pound braided line and crafts his leaders out of thick mason’s twine. To hold bottom in the swift Columbia River, McMinds has employs up to 84 ounces of lead. As for bait, fresh is best: try to track down locally caught American shad, or beg for some salmon bellies, tails, and guts from local anglers cleaning their catch.

How/Where To Fish: McMinds has been sturgeon fishing for so long, he has hundreds of spots marked on his GPS along miles and miles of river. However, what many spots have in common is that the bottom consists of primarily gravel and forms a funnel where a 40- to 60-foot-deep channel cuts through shallower bottom. Sturgeon most often prefer to let a meal come to them, so these underwater channels concentrate the fish. Get your baits right in the slot and you’re usually in the money.

Where To Stay: Considering that sturgeon dwell in such a long span of river, many towns, such as Hood River, The Dalles, and Troutdale, Oregon provide ample lodging opportunities that fit any budget. If you want to follow in the footsteps of Joe Cermele and company in this episode, check out Peach Beach Campground across the river in Maryhill, Washington.