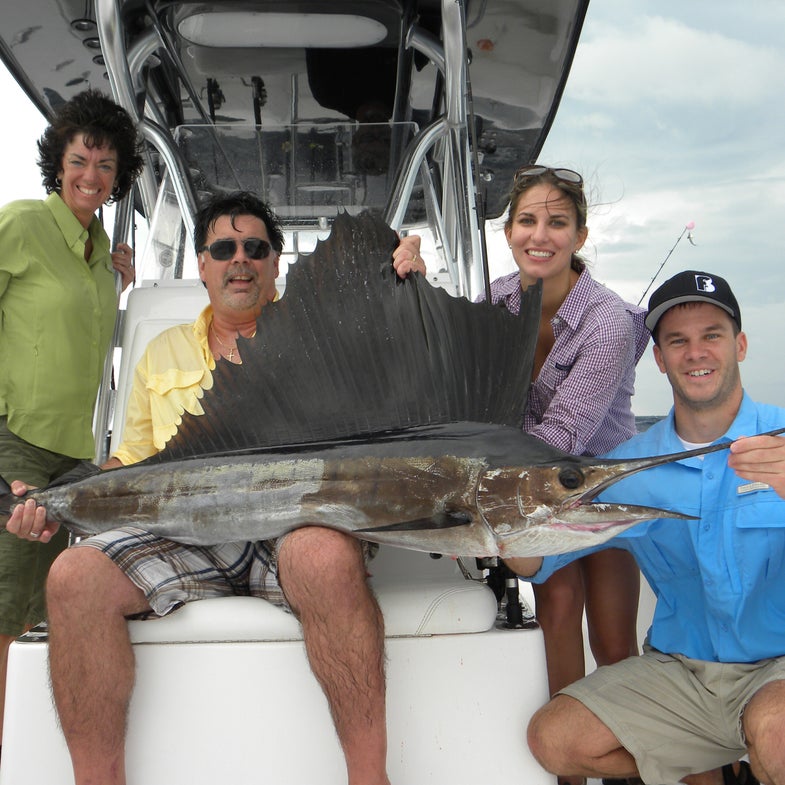 In 2011, Hook Shots sponsor Crown Royal ran a fishing photo contest. Casey Hoffman of Allentown, PA, won that contest. Not only did his prize include a chance to join host Joe Cermele in this episode, but he got to bring three guests down to Key West for the shoot. Who did he choose? His mom, step dad, and girlfriend, who all quickly came to learn that when the camera rolls, the wind often blows and fishing with veteran captain Mike Weinhofer is far from an ordinary on-the-water experience.

The Deal: Beginning in late October and lasting well into spring, Key West experiences its best sailfish action. Of course, no matter when you visit the island there is always something swimming around that’s willing to pull some drag. In this episode, Casey and family got the chance to tussle with sails, dolphin, king mackerel, sharks and even some “pet” tarpon.

When To Go: While there is no wrong time to head to Key West, Captain Mike Weinhofer would likely tell you to aim for November and December if it’s cold-season sailfish action you’re after. If grouper, amberjack, dolphin, and various mackerel family members are more your speed, try September or October, but you can expect to hook these species right along with sails in the winter months. Just so you’re aware, while November through January offers prime fishing opportunities, it’s also the “windy season” so be ready for a potentially bumpy ride.

What To Bring: One thing is for sure: If you hire a Keys guide, you won’t have to worry about tackle. Almost every guide is willing to accommodate whatever your preferred method may be. Want Cero mackerel on a fly rod? No problem. Dolphin on largemouth bass tackle? You got it. What you should bring is plenty of sun block, Dramamine (if you think you need it), and foul weather gear, as storms can pop up any time in Key West.

How To Fish: When conditions get snotty like they did during this Hook Shots shoot, Captain Mike opts for the balloon game. Live pilchards or goggle-eyes are suspended at various depths below balloons and set out at different distances away from the boat. As the boat drifts over changing bottom contours, anything from trophy sails, to monster sharks, to bull dolphin can take a swipe. The beauty of Key West is that you don’t need to run far offshore to get into the action.

Where To Stay: There are loads of hotels and motels in Key West, both chain and mom-and-pop operations. If you’re a bed-and-breakfast fan, you’ll find plenty of those, too. For a safe bet that’s reasonably priced, we recommend the Doubletree Key West.