If you’re after a true trophy walleye (10 pounds or better), starting the hunt in big, deep water isn’t a... 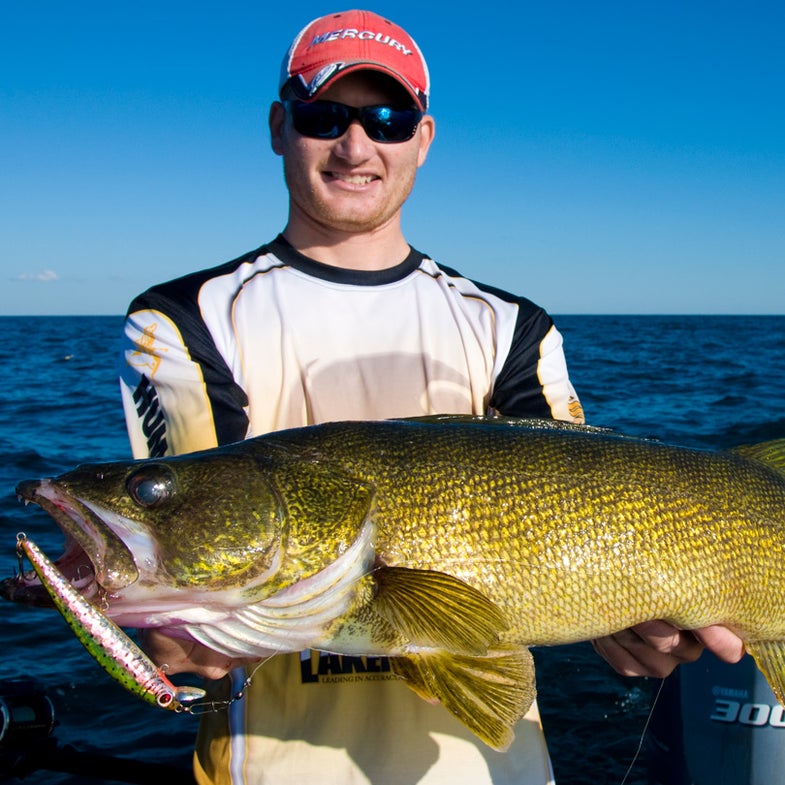 If you’re after a true trophy walleye (10 pounds or better), starting the hunt in big, deep water isn’t a bad idea. Guide and pro angler Ross Robertson specializes in dredging up “donkeys” in Lake Erie, and frequently fishes in depth ranges many casual walleye trollers are afraid to tackle. When Robertson called “Hook Shots” host Joe Cermele and told him to get to Erie, PA, fast because the bite was on, Cermele listened. Find out just how far the boys tipped the scales with monster ‘eyes.

The Deal: Lake Erie is renowned for its healthy population of jumbo walleyes. Thing is, the big dogs move throughout the year. Fish that are providing a solid bite near Cleveland can be stationed up far east in Pennsylvania in a matter of days if the baitfish are headed that way and the water temperatures are more desireable. In the middle of the summer, according to pro walleye angler Ross Robertson, fishermen out of Erie, PA, are often the lucky ones. It’s this part of the Eastern Basin where the giants take up residence for a while before heading back west for the fall.

When To Go: July is considered a peak month for big ‘eyes out of Erie, PA. Of course, like any fishery, you can’t exactly set your watch by the movements of the hogs. That’s why Robertson is ready to jump in the truck and move around the lake as far as he has to go to stay with the “gorillas.” It usually pays off, as he’s dialed into the walleyes’ travel schedule better than most guys fishing Lake Erie.

What To Bring: Serious walleye trollers bring everything except the kitchen sink. Given that walleyes can be so finicky depending on water and weather conditions, Robertson and tournament partner Bob Henton leave the ramp armed with literally hundreds of spinners blades, crankbaits, stickbaits, and spoons in every shape, color, and size imaginable. But if you need to narrow down the tackle list to a few essentials, make sure you carry lures and blades in dark purple, silver, gold, and chartreuse. These standards will often produce no matter what the conditions. Robertson and Henton troll up to nine rods ranging in length from 11 to 8 feet, and fish reels rigged with line counters that allow them to get lures to their target depth more easily. Planer boards help cover more water by getting lines out to the side of the boat, while adjustable Dipsy Divers (weighted planing disks) get lures and worm harnesses deep without the need for downriggers.

How To Fish: The name of the walleye trolling game is S.L.O.W. Henton and Robertson rarely get the boat moving faster that 2 miles per hour. Considering these guys are only interested in true bruiser walleyes, they frequently target a depth range of 90 to 120 feet and use their sounders to find fish holding in cooler water at the thermocline. In the summer, that colder band of water is often 40 to 60 down in the column. Since these fish are suspended in summer, good bottom structure is not nearly as important as baitfish. Find bait at the thermocline and you’re likely to find the walleyes chowing down.

Where To Stay: There are many chain motels and lake-front inns in the Erie, PA, area that offer reasonable rates. But be warned: this is a popular summer destination for people from Pittsburgh and the surrounding area, so book early if you can. For more info on Erie lodging, check out Visiteriepa.com.