When winter takes hold, there aren’t that many East Coast gamefish species that become easier to catch. That’s what makes... 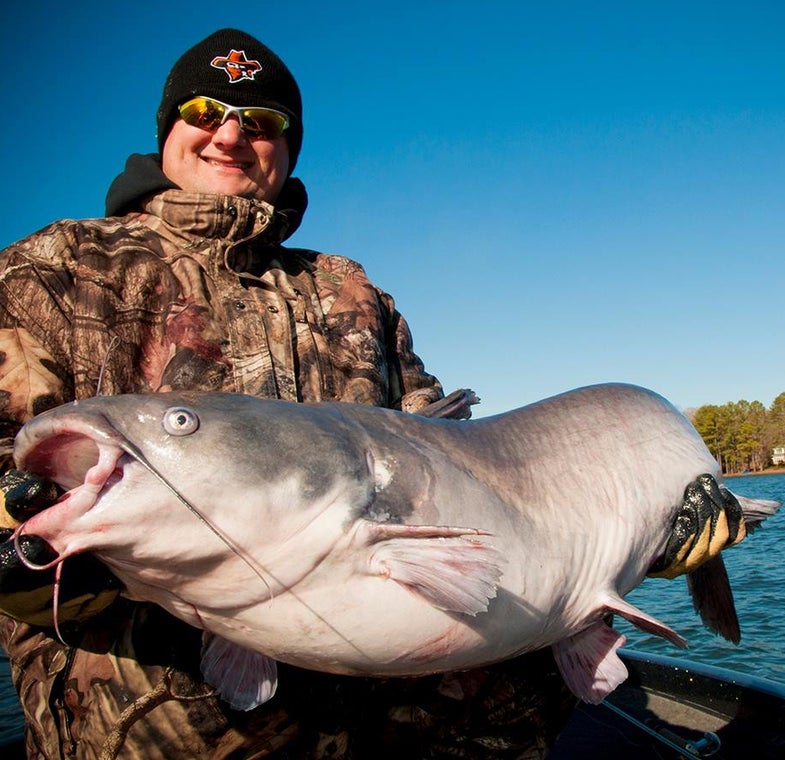 When winter takes hold, there aren’t that many East Coast gamefish species that become easier to catch. That’s what makes the blue catfish so unique. The colder the water, the more tightly they group up, making them easier to find. They also have no problem eating on the chilliest of days. To wrap up “Hook Shots” Season 5, host Joe Cermele and bass pro/F&S blogger Dave Wolak head to North Carolina’s Lake Gaston looking for a few more epic fish fights before Santa comes down the chimney. Find out if they got the early Christmas presents they were looking for.

The Deal: Part of the Roanoke River chain of lakes, Lake Gaston straddles the border of North Carolina and Virginia. Though it’s a popular bass lake, blue catfish are perhaps its hidden gem. You can catch them all year, but the coldest months often give up the biggest cats and big numbers.

When To Go: If you’re looking for a fun long weekend with the family, you’ll catch all kinds of fish spring through fall; if you’re a serious, diehard catfish freak, you want be there from December through February. This time of year, catfish that have been roaming stack up and concentrate on creek channel edges and river ledges. Drag a shad chunk through them and it’s game on in the off-season.

What To Bring: Local catfish pro Tony Fox leans on medium-heavy to heavy conventional sticks for Gaston cats, occasionally swapping a lighter bass rods into the mix just to keep things interesting. His specialized “Santee rigs” consist of a three-way swivel that holds a stick weight and the main leader, on the end of which you’ll find a foam float and 4/0 circle hook. Fox prefers fresh gizzard shad chunks for bait, but chicken and fresh white perch work well, too. Just make sure your reels have good drags, because you’ll need it if you have to coax up a 30-plus-pound cat that would prefer to stay glued to the bottom.

How To Fish: Fox’s method is loosely known as “strolling.” Whereas most catfishermen anchor on a spot and wait, Fox feeds out 6 to 8 lines, places the rods in crappie rod holders, and slow-drifts along channel edges and rolling bottom. This allows him to cover a lot of water. The weights gently tick over the gravelly lake bed, and when a fish bites you’ll know it; the rod just bends in half in the holder.

Where to Stay: There are plenty of chain motels in Roanoke Rapids on the east side of Lake Gaston. Of course, there are also plenty of mom-and-pop resorts, fish camps, and cabin rentals, too. During our shoot we rented a cabin at Stonehouse Timber Lodge in Littleton, NC. The prices are reasonable, there’s an excellent bait and tackle shop on the premises, and you can even rent boats. Stonehouse has everything you need on site for an excellent fishing getaway.