Is it really possible to dial in drifting meal worms for trout so much it becomes an art form? ****Spend... 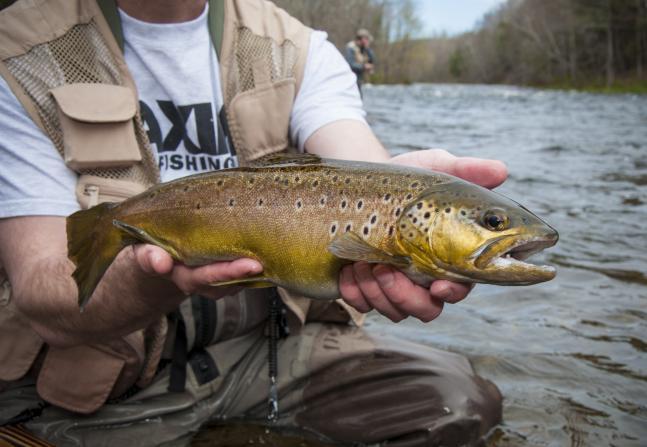 Is it really possible to dial in drifting meal worms for trout so much it becomes an art form? ****Spend a day on one of Connecticut’s trout streams with Matt Wettish—a.k.a. the Mealie Master—and you’ll walk away questioning whether you’ll ever tie on a spinner or drift a nymph again. Wettish’s expert understanding of presentation, reading water, and rigging a worm to make it look natural routinely allow him to outfish everyone else, even on pressured rivers. Host Joe Cermele (along with Wettish’s band of cohorts) followed his teachings on the Farmington and Salmon Rivers, and walked away with loads of big browns, bows, and brookies.

The Deal: When the average guy thinks about ultra-light trout fishing, 4- to 6-pound test line likely comes to mind. After years of trial and error, Connecticut angler Matt Wettish decided hair-thin 2-pound fluorocarbon was the deal. In his opinion, while fighting big fish on such thin line is a challenge, nothing else allowed him to achieve the natural presentations he was trying to master, or reach the bottom under any conditions more effectively. Wettish has a flyfishing background, and used his knowledge of drifting flies and trout forage to fine-tune his gear and his bait of choice. Meal worms, he believes, are the most widely available bait that represent everything from a stonefly to an inch worm to an aquatic larva. Their light weight also makes them easier to present in a wide variety of situations and current speeds than heavier garden worms or nightcrawlers.

When To Go: The beauty of meal-worming for trout is that it is just as deadly in spring as it is in the dead of winter. Wettish fishes Connecticut’s Farmington River year-round, and argues that his ultra-light method is more effective in the tough months—summer and winter—than any other trout technique. You can adapt his game plan to any moving water that holds trout anywhere in the world.

What To Use: Wettish is a stickler about rods. He prefers 6.5- to 7-foot ultra-light spinning rods that have a fast tip, but a slow enough butt section for the rod to bend almost to the handle. The deeper and slower the arc, he says, the better it will allow you to control and fight fish on such incredibly thin line. The fast tip is important because a whippy tip won’t cast his light rig as accurately, or transmit subtle pick-ups as well. As for weight, Wettish like size BB split shot, and uses size 12 scud/nymph fly hooks instead of traditional bait hooks because they’re lighter and won’t weigh down the bait. They also penetrate faster with less force.

How To Fish: Wettish pierces his worms through the first ring behind the head, then runs the hook through the bait until it exits the back. He only wants the point exposed and the eye hidden inside the worm. This rigging style keeps the mealie perfectly in line with the main line to thwart spinning and twisting. Cast the rig out and high stick the rod. Wettish likes to keep a short length of the line in his left hand as you would when drifting a nymph with a fly rod. You want the weights barely ticking and skimming the bottom. When you get picked up, set with and gentle up-swing of the rod, and tug on the loose line in your hand, feeding it back towards the reel until the drag engages.

Guides: While Wettish is not a guide for hire, head over to Real Outdoors TV to see more videos of the Mealie Master in action and learn more about his method.