A Virtual Long Shot: Hunting Texas Whitetails from a Computer

Down in Texas one day back in ’03, some of the boys were sitting around watching critters gather at the... 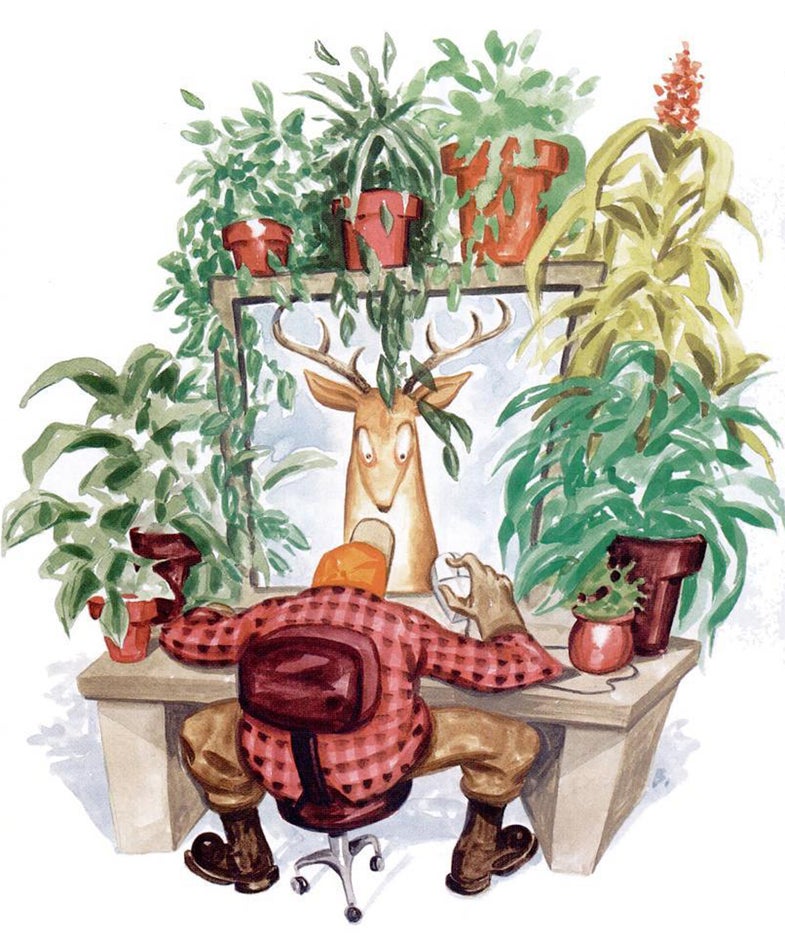 Down in Texas one day back in ’03, some of the boys were sitting around watching critters gather at the feeders on a game ranch. These were “live streaming video” animals on a website that let folks observe and photograph wildlife through their computers at the click of a mouse. And that is when a particularly perverse bolt of lightning apparently struck. “We were looking at a beautiful whitetail buck,” John Lockwood, a body-shop estimator for a San Antonio car dealership, is quoted as saying, “and my friend said, ‘If you just had a gun for that.'” Hearing those words, Lockwood and his partner, Greg Stevens, invested somewhere between $10,000 and $20,000 to construct a motorized platform that would permit a rifle to be aimed and fired “at real targets in real time” via a camera. Which sounded fine as long as the targets were paper and metal. But Lockwood and Stevens took the name of their “new concept,” Live-Shot, a bit too seriously when they announced on their website that they were “currently working on a very comfortable, ADA [Americans with Disabilities Act]—compliant blind which will house the LIVE-SHOT shooting system.” This “unique computer assisted hunting opportunity” could be offered to “disabled and handicapped hunters, as well as others who would like to try this type of hunting.”

Live-Shot was proposing to grant not only the physically challenged, but everyone else, the real-time chance to bag a blackbuck or axis deer or a feral hog or two through their own computer screens by simply pushing a button. For Lockwood, his system was simply part of the natural progression of hunting tools from rocks to spears to high-powered rifles. And Live-Shot would not be just about killing, either. He wanted it well understood that no animal would ever be penned or tethered in front of the camera, because, as he said, hunters “who just want a trophy head to hang on their wall and don’t care how they get it” were definitely not the ones he was “trying to help.”

So we see that Live-Shot was all about helping. And caring. Yet when word of it surfaced in mid-November and spread like grout mold through the international media, the reaction was immediate and fierce.

It was no surprise to hear the president of the Humane Society of the United States, Wayne Pacelle, declaring that Live-Shot would “distance the hunter entirely from the act of killing, and deny the animals any of the ‘respect’ that hunters tell us they feel for their prey.”

LAME IN REALITY, TOO

Less expected, perhaps, was to hear an executive of the Texas Wildlife Association say that Live-Shot “doesn’t help wildlife, it doesn’t help the habitat, it doesn’t help hunting.” The Dallas Safari Club’s executive director blurted out, “Internet hunting is really a sick idea.” Safari Club International sent out a press release stating its opposition to the “recently publicized form of Internet activity that the organization feels has been improperly designated as ‘hunting.'”

Obviously, Live-Shot was an infernal device that would spell the end of the sport—unless you really looked and saw that there was far more illusion than reality to it. Several personal online tours of the Live-Shot target-shooting facility that I made last December (at a cost of $14.95) were enough to prove that. What appeared on my screen were assorted plates of whitewashed steel arrayed on welded frames, pockmarked metal silhouettes of poultry, swine, and sheep cast out upon the ground, and curled-up paper targets tacked to sheets of plywood. And it didn’t look as if much shooting activity was taking place, either, judging by the horses grazing in front of the camera.

My diligent efforts to secure a shooting time, even weeks in advance, proved fruitless, it being explained that it was extremely difficult to find enough “friends and family members” whose schedules would allow them to man the facility.

That’s the target-shooting side of Live-Shot. The hunting operation is yet to come, though Lockwood claimed at press time that it would be up and running by early April. A German TV crew participated in the first test hunt on January 29 and, after several hours of screen gazing, bagged a hog. Fifty percent of the clientele is expected to be international. The “hunts” will consist of six 20-minute sessions at the computer using a semiauto .30/06 loaded with two cartridges. Due to the delay between the live action and the images appearing on a so-called hunter’s monitor, an armed guide will be on hand to control an electronic safety and, count on it, to finish off the wounded. Available game on the 330-acre Live-Shot ranch will include free-ranging exotics that Lockwood says wander across the low-fenced property, as well as some stocked hogs and species of sheep. The basic cost will be $300, with added fees for skinning, taxidermy, and trophies that can exceed $7,500. All that’s left to do is to find anybody sorry enough to want to sign up.

Ultimately, insult is the only thing Live-Shot, the hunt, has to offer: insult to disabled hunters who account it a point of honor to work for their game, and insult to hunters in general for suggesting that there are any real ones who would find something as ghastly as Live-Shot in the least appealing.

Texas wildlife regulators have introduced a rules change that would ban remote-control hunting for all animals and gamebirds native to Texas. The proposal will go before the Parks and Wildlife Commission for final action this month, but it will not pertain to Live-Shot because the operation targets only nonnative species. Nonetheless, a bill that would outlaw remote-control hunting for any animal is currently pending in the state legislature, so there’s no doubt Live-Shot’s days are numbered.

One fine day, all Web-based hunting will be deemed illegal; but before then, some whack-jobs will undoubtedly give it a whirl. No matter how well it performs, it can only be a travesty, and anyone who participates will have forfeited his claim to being a genuine hunter. Any site like Live-Shot is simply a place where no self-respecting sportsman would ever be caught dead.

From the April 2005 issue. Illustration by Tim Bower