A Visit to a B-17, the Flying Fortress

I usually leave the military stuff to Dave, but last Sunday one of the few remaining working B-17s flew into... 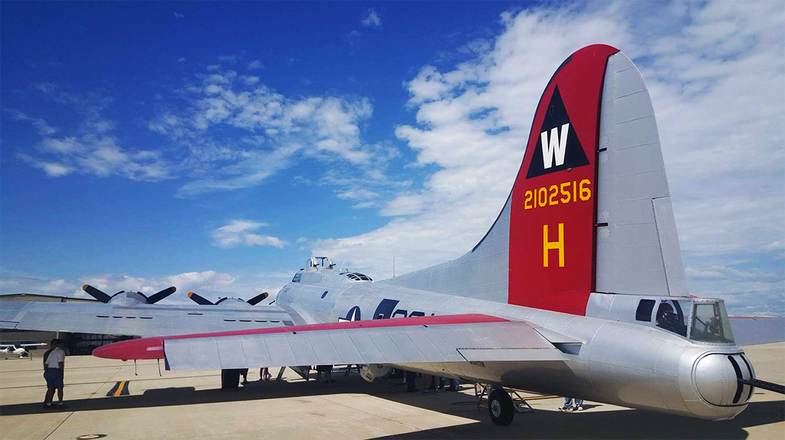 I usually leave the military stuff to Dave, but last Sunday one of the few remaining working B-17s flew into our local airport and my son and I had to go see it.

Bristling with Browning .50 caliber guns and immediately recognizable by its giant tailfin, the Flying Fortress is one of the icons of the American war effort in World War II. Designed in the 1930s in the erroneous belief that bomber formations could fight their way into enemy territory in daylight and drop bombs with precision accuracy, the B 17s suffered terrible casualties (of 2,900 airmen taking part in the second Schweinfurt raid in October of 1943, 590 were killed) early in the bombing campaigns. Once long-range fighters could accompany them all the way into Germany, casualties in B-17s dropped from “catastrophic” to merely “high.”

And it was cold in a Flying Fortress, fifty below zero at high altitudes. In the picture, I’m standing by the waist guns. This particular B-17 is the G model, the last ones built, and it had plexiglass windows over the waist gun ports. Previous models had no plexiglass, and were even colder than the B-17G. Aircrews wore electrically heated suits, but frostbite was always a danger, although less of a danger than flak or fighters. I have known a couple of men who fought in B-17s, and they wouldn’t talk about what it was like up there.

What made this visit special, though, is that there was a genuine ball turret gunner on hand, who had to be at least 90. He was dressed like a farmer, was spry and short (ball turret gunners were) and he had no problem talking about B-17 combat at all. In fact, he had so little problem talking about it I never got a chance to meet him, and contented myself with hanging at the edge of the crowd around him and listening to stories about shooting at enemy planes, the relief and joy of seeing P-51 Mustang escorts, and the time the USAAF commandeered a farmer’s field so they could lengthen the runway for a top-secret visitor: the then-brand new B-29 Super Fortress.

The ball turret was, well, a ball, hydraulically operated in the belly of the plane. It could be cranked up into the fuselage for takeoffs and landings, but in combat, the gunner curled up into a fetal position with the back ends of the twin .50s practically in his face. In fact, the guns were so close and the gunner so cramped, he couldn’t work the bolts normally and had to pull a cord rigged to a pulley.

There was no safe place in the B-17, but the ball turret gunners must have felt especially exposed, hanging out of the belly of the plane several thousand feet above Nazi Germany. And, as Randall Jarrell’s poem “Death of the Ball Turret Gunner” makes graphically clear, their tours of duty sometimes ended horribly: “When I died they washed me out of the turret with a hose.”

The old gunner said he was scheduled to take a flight on the plane the next day. He said he was a little disappointed to learn he’d be sitting up by the cockpit. “If it was up to me, I’d take the whole flight right here,” he said, beaming and pointing at the ball turret.

Those bomber crews were a special breed.