Canada geese can do a lot of damage—to a hunter 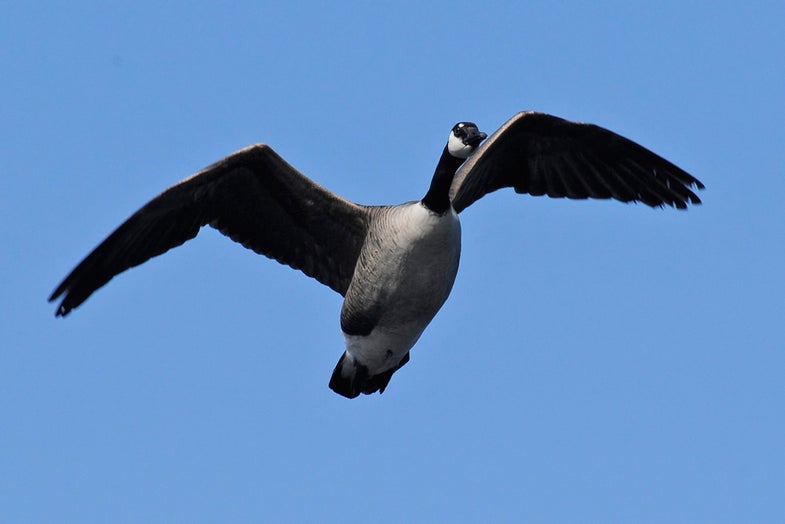 Robert Meilhammer of Crapo, Md., made the national news last week when a goose shot by a member of his hunting party hit him in the head, rendering him unconscious and knocking out two of his teeth. Meilhammer was flown to the University of Maryland Medical Center’s Shock Trauma Center in Baltimore. When he came to, he knew his name but was pretty hazy on everything else. He was last reported to be in stable condition.

The goose apparently fell from about 90 feet and would have been traveling 50 mph. Assuming a 10-pound resident giant Canada goose, Meilhammer was struck with 853 foot-pounds of energy, which is in the range of a very hard punch from a professional boxer. No wonder it knocked him cold.

Years ago, on my first trip to Saskatchewan, I saw someone beaned with a goose first-hand.

It was the last morning of the hunt, and we were in a picked peafield. Layout blinds hadn’t come along yet, but there plenty of big round bales in the field, and we hid ourselves sitting or standing in their shadows. The geese weren’t decoying well—perhaps because we weren’t as cleverly hidden as we thought we were—but they swung low enough to give us lots of chances. I was still mostly an upland hunter then, with no idea how to lead a crossing target, and I missed and missed while everyone else rained geese, which fell into the pea stubble with loud thumps.

My friend Tom was about 20 yards to my right, standing up against a bale. I remember missing yet another a goose, and glancing over to see Tom down on his hands and knees, a dead goose on the ground next to him. “I had killed two and was lining up on a triple when it hit me. I thought I’d been shot,” he said. Although he remained aware and conscious, his cheek and jaw were badly swollen. As far as I could figure, one of the first two birds of his unfinished triple hit him. He did it to himself, although he blamed me for it. I know it wasn’t me because I hit all of one goose that day, and it was later in the hunt.

After he got home, Tom suffered neck pain and had trouble sleeping. Months later, he couldn’t stand it any longer and described his symptoms to a doctor. The doctor asked “Has anyone punched you in the jaw in the last year or so?”

“No, but Phil Bourjaily hit me in the head with a goose,” he replied. The doctor told him he needed surgery. This did cure his neck pain.

In general, it’s best to avoid falling birds. I have heard stories of people catching dead ducks out of the air, only to have broken wingbones stab them through the hand.

I heard the best falling-bird story in Colorado over the weekend, where I was doing some goose hunting myself. No one was harmed by falling geese, although several geese did fall. Our guide—Jeff Colwell, of Front Range Guide Service, who was terrific—had a story that easily topped Meilhammer’s and mine, and a picture on his phone to prove it.

His party was having a good day shooting lesser Canadas, which often come in by the flock, and after one good volley there were geese falling everywhere. “I saw one fall toward the pit and I yelled, “Look out!” says Colwell. His hunter was swinging back on another bird when the falling goose hit the muzzle of his gun. Colwell showed me the picture of a lesser Canada that had been impaled and slid about 8 inches down the barrel. I didn’t ask his permission to reproduce it here, and it’s gruesome anyway, although to be fair to Colwell’s photography skills, it’s as tasteful a picture of a goose on a 12-gauge skewer as you’ll ever see.

Moral of the story is, it’s the dead geese that get you. Pay attention when they fall.