Everything you need to know about bombogenesis, nor'easters, and wazoos 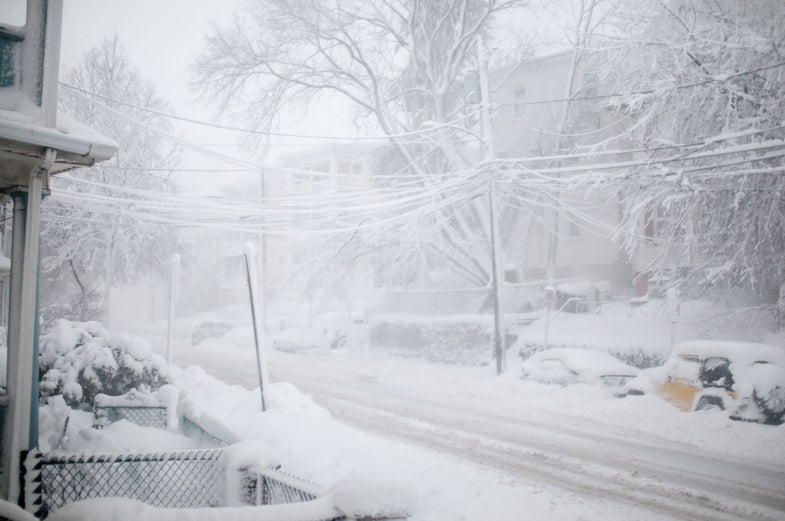 A winter whiteout in New England. By Eric Kilby/Flickr
SHARE

I awoke this morning to a major nor’easter taking shape as a powerful area of low pressure off the East Coast was undergoing bombogenesis as it moved northeast along the coast. Bombogenesis, of course, simply refers to the creation of tiny bacterial suicide bombers, usually by terrorists. Actually, no. Bombogenesis is any rapidly intensifying area of low pressure, such as when the cop you thought was pulling you over was really after the guy ahead of you. It begins as cyclogenesis, the development or strengthening of an area of low pressure or trough. (Not to be confused with cyclosis, which is supposed to be its opposite but which, in fact, is conspicuously absent from the NOAA glossary. This, incidentally, is a great place to waste time learning terms to impress your friends. Or people you thought were your friends.)

All of this is the meteorologist’s way of saying, “It snowed. And it might snow some more. But it might also change to sleet, freezing rain, or tiny ice cubes.” Meteorologists hedge their bets so much that they make economists look like soothsayers.

I did some research this morning and came up with some fascinating bits of weather trivia. The terms blowing snow and drifting snow, for instance, are not the same thing. What’s the difference? Eight feet. That’s right. Blowing snow is that lifted from the surface by the wind to a height of 8 feet or more, often reducing visibility. Drifting snow is lifted by the wind to heights below 8 feet.

Why 8 feet? Because it’s more than 7 and less than 9. Don’t you feel a little gullible for having asked? I did.

I also heard a TV forecaster boldly predict “airport delays up the wazoo.” The term wazoo is thought to date from the 1970s—nobody has the faintest idea why—and to refer to the buttock region, especially when undergoing bombogenesis. I predict that wazoo will soon be associated with any airport travel delay, especially now the TSA has announced that it will conduct “more rigorous” pat-downs. Your wazoo may no longer be off-limits

Which brings us to the tricky matter of nor’easters. We like saying this word because it makes us feel nautical. It came to American English by way of British English. Nore was used to reference north as early as 1612. Noreast is even older, dating from 1594. It was used on a compass rose (those charts that name the 4, 8, 16, or 32 wind directions) published in 1607.

But it may not be a truly American term at all, but a kind of literary affectation that caught on. As linguist Mark Liberman explains, the contraction of northeaster to nor’easter is quite likely a “fake” word. Why? Well, for one thing, a mariner from New England—say, Boston—would be far more likely to swallow the “r” and pronounce the word “no’theastush.”

Nevertheless, the use of the term seems to be on the rise. According to the Boston Globe’s Jan Freeman, “from 1975 to 1980, journalists used the nor’easter spelling only once in five mentions of the such storms; in the past year (2003), more than 80 percent of northeasters were spelled nor’easter.”

In other words, my five-day forecast is for “nor’easters up the wazoo.”