Webs: Footwear for the Ages 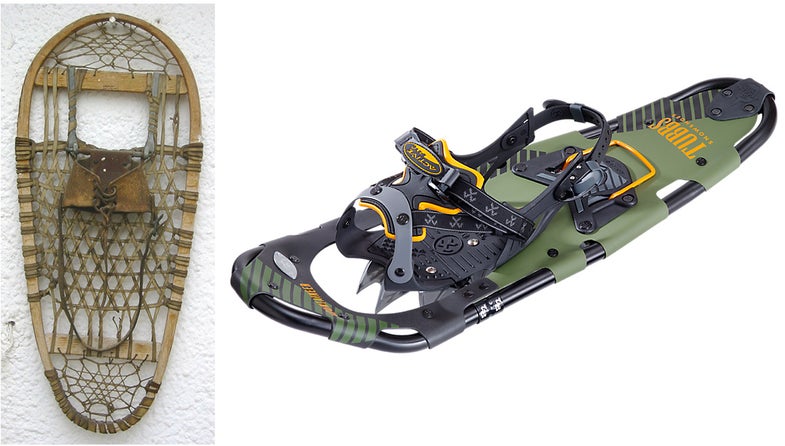 Traditional "webs" and a modern snowshoe by Tubbs. Katpatuka via Wikimedia Commons (left) and from Tubbs
SHARE

Back when The West was still The West and livestock did not feel safe at night, you could walk into old saloons in really obscure places and see elk and deer heads on the wall that would make it into Boone and Crockett and then some. The bartender would explain that the town drunk shot the critter in 1925 and then traded the horns for a quart of squirrel juice, which is what they call 150-proof pure neutral grain spirits.

In Maine, there are no B&C trophies on saloon walls. What we have instead are ancient snowshoes, made of ash, whose frames were bent over steam and webbed with rawhide. A great many of these snowshoes (“webs,” they call them for short) were made by Native Americans, and they are both beautiful and intricate. Some of the webbing is fantastically fine, woven into complex, perfectly symmetrical patterns, and is still as tight and straight today as it was 100 years ago, or more.

The oldest snowshoes were discovered in 2016 by Italian scientists in the Dolomite mountains, and are thought to have been made between 3,700 and 3,800 years ago. Those are the earliest we know about. My guess is that the first person who thought of making them was a Cro-Magnon who was tired of sinking up to his ass in snow.

This all came to mind because it’s now snowing here, and I just retrieved my snowshoes from the tool shed.

I love the old wood and rawhide snowshoes, but they’re a pain. The wood needs to be varnished every so often, as does the webbing. If the webbing is not maintained, it soaks up water, and stretches, and becomes unusable. And mice love to eat snowshoe webbing, so you have to find some way to store it so the little bastards won’t devour it. So in 2012 I gave up my old-fashioned webs for the new breed of snowshoe, in this case made by Tubbs, a Vermont company that was founded in 1906.

The frames are aluminum instead of ash. The webbing is no longer rawhide, and no longer called webbing. It’s made of nylon, and is called a deck, and is solid instead of cross-hatched. The bindings, which hold your feet in place, are nylon, and fasten with Velcro. Old-style bindings were made of heavy leather, which would get soaked and then freeze, and were guaranteed to give you a half-hour or so of mounting fury as you tried to get them on. Some of them fastened with buckles. The really entertaining ones used rawhide laces.

By themselves, snowshoes don’t have a lot of traction, and if you’re heading uphill or downhill, you can find yourself sliding downhill, sometimes fast. So the new-age webs come with a pivoting crampon that rocks back and forth ahead of your toes and bites in to keep you from skidding.

Traditional snowshoes come in all sorts of shapes and patterns, but there are three basic varieties: Bearpaws, which are short, wide, and designed for brushy country where you don’t get a straight, uncluttered path. They’re the most maneuverable and the easiest to turn in. Pickerels, which are long and narrow, and made for open country. Michigans, which are a cross between the two. The webs I had were Michigan pattern.

Today, I don’t think anyone makes modern showshoes in any pattern but Bearpaw. If you’ve ever tried to make a 180-degree turn in Pickerel snowshoes, you’ll know why, and the Michigans are no delight either.

Snowshoe size is dictated by how much you weigh. The more pork you pack, the bigger your shoes must be.

As for actual snowshoeing, I’ve seen it described as easy and effortless. Maybe, on a maintained trail. In the real woods it’s hard work. Be advised not to overdress. When I put on the webs for a jaunt in the woods, I wore the Wool Blanket Shirt and Canvas Anorak made by Duluth Pack (formerly Duluth Tent and Awning). Both of them are quite wonderful, and I’m delighted to see that Duluth still makes them. When you start on the trail, you think you’re going to freeze to death within 10 minutes, but then you warm up, but without sweating. That’s the important part. If you sweat, nothing will keep you warm.

French-Canadian coureurs de bois (literally, “woods runners,” or “people so horrible that even other French Canadians couldn’t stand them, eh?”) who lived on snowshoes, coined the term mal de raquette, or snowshoe sickness, which referred to the blinding pain you suffer if you overdo things when you start. Snowshoeing requires using odd muscles in odd ways, or conventional muscles in odd ways, so take it easy at first.

Do not carry ski poles when you snowshoe. You could be mistaken for a cross-country skier. Carry a rifle. Or carry a staff that you cut yourself. It’s very good for poking at things like suspicious holes in the snow, or wolves, or ice that may be a little too soft.

If you’d really like to be authentic, you can subsist on the coureurs’ diet, which consisted of corn mush, pea soup, and pork fat. This produced more or less constant flatulence, which can not only keep you warm, but also warn bears of your presence and, in extreme cases, frighten them away.

And for you snowmobilers, remember the Golden Rule: Never take your machine out farther than you can walk back on webs. I knew a Manitoba trapper who had to hike 18 miles on snowshoes when his snowmobile quit. He owes his life to them. Not bad for something that was probably invented in the Stone Age.