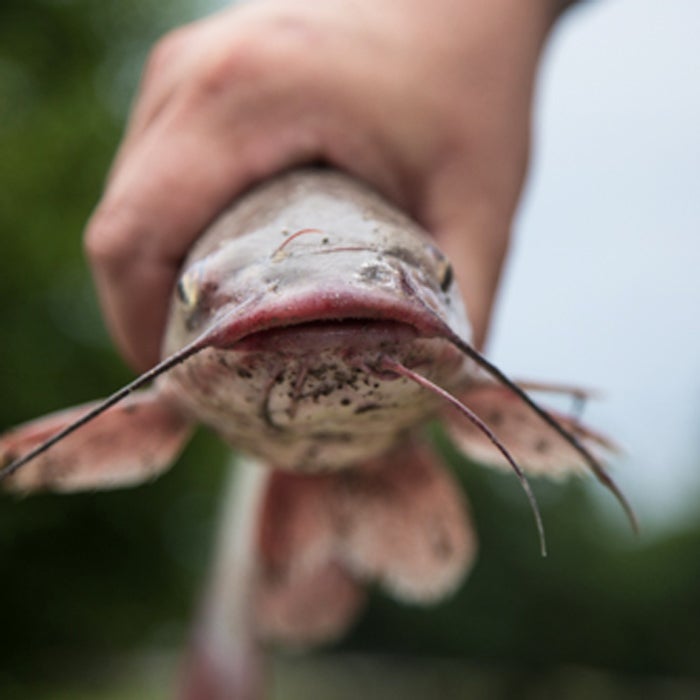 Shark what? We all know catfish are America’s fish. That’s why all this week, we’re paying homage to the channels, blues, and flatheads that keep us on the water—and the noodlers, pay-lakers, and other whisker-fish nuts who chase them. It’s #CatfishWeek at Field & Stream.

For a Yankee from New York, the idea of paying money to fish in a pond that’s been overstocked with farm-raised catfish is just, well, odd. But then I got down to Louisville, Ky., and met the regulars at Diddles Pay Lake. They live in a world of custom poles and vintage Abu Garcia reels, and they pretty much all reside in the city. Yet, thanks to pay lakes—of which there are several in the Louisville area—they can be sitting on a cooler, beer in hand, casting homemade burger bait just 10 minutes from home. “See, that’s what makes this lake so good,” I was told. “It’s convenient. It’s right in the middle of everything.” And in the middle of the pay lakes, there are catfish. Lots and lots of catfish.

This is the story that inspired our trip to the pay lake. It’s the tale of an angler who got kicked out of a “no-limit” lake—for catching too many fish. When Ron Riordan posted a photo of the 80 channel cats he had hauled out of Horseshoe Lake, the owner, Curtis Ables, bounced him from the place. Their heated exchange—secretly recorded on Ron’s cell phone—became national news after that. We caught up with Ron and Curtis to hear both sides of the story.

Word got around that local pay-lake legend Ron Riordan was doing a video on his secret bait. “You ain’t really gonna give him the recipe, are you?” one buddy asked. Pay-lake fishermen keep their recipes close, because it’s one of the few things that can provide them a real advantage. Over the past 30 years, Riordan has developed a reputation, not only as one of Louisville’s best catfishermen, but also as one of its best bait chefs. The next day, with cameras set and ingredients in the open, we were ready to roll.

“Ready for it?” Ron asked. “This is the secret.” He slammed down a bottle of Evan Williams Kentucky Straight Bourbon. Cheap whisky. “Now the world knows,” he said. “Want a drink?”

We know that many anglers don’t like pay lakes, and we share some of their concerns. No sportsman wants to see a trophy catfish removed from wild waters and dumped into a pay lake. Like many of you, we would rather fish for wild cats in lakes or rivers. But for some anglers, pay lakes are the best, if not the only, option they have.

Take, for example, “Catfish” Chris Lanham. Fourteen years ago, he was in a car crash that left him paralyzed from the chest down. “Fishing’s has always been my go-to, something I live for,” he told me. For a long time after the accident, Chris couldn’t fish—not until he and his grandpa built an ingenious rig that allows him to cast and reel.

We know pay lakes are polarizing, but pay attention to the joy on Chris’s face when he catches a fish. Pay attention to how a fellow angler gladly helps him unhook that fish. If that scene seems familiar, it’s because anyone who’s fished long enough can appreciate moments like that—whether they happen on a city pay lake or in a wild stream.

“Ain’t nothing better than telling a story and catching a fish,” the fellow angler says in the clip.

It is hard to argue with that.

Love them or hate them, pay lakes exist. They have their problems, but they also attract a unique culture of passionate fishermen—fisherman with good stories that we believe are worth sharing.

The Basics of Noodling

Catfish noodlers are asked a bunch of standard questions: Aren’t there snakes down there? Turtles? Does it hurt when a big flathead bites your hand? Doesn’t all of this scare the $#@% out of you? The answer, to all the above, is pretty much yes. It’s what keeps these guys coming back.

A veteran handfisherman talks big-river noodling—and the importance of releasing trophy flatheads so that they can bite another arm on another day.

How to Make Catfish-Skinning Pliers

It’s a challenge generations of catfishermen have faced: How do you keep the slimy things still while you’re trying to skin them? Some folks nail the fish’s head to a tree. Others ask their wives to grab the bottom jaw and “hang on tight.” Ryan McCafferty, who fishes on the Tennessee River, devised a new tool for the task using a pair of vise grips, two nails, a welder, and some chain. It looks a little crude—but it really works. “With these, I can wrap a chain around the trailer hitch and skin a mess of catfish no problem,” he says.