Were the Voyageurs the Toughest Outdoorsmen of All?

These French-Canadian fur freighters didn’t go heeled, but they were as rugged as outdoorsmen get 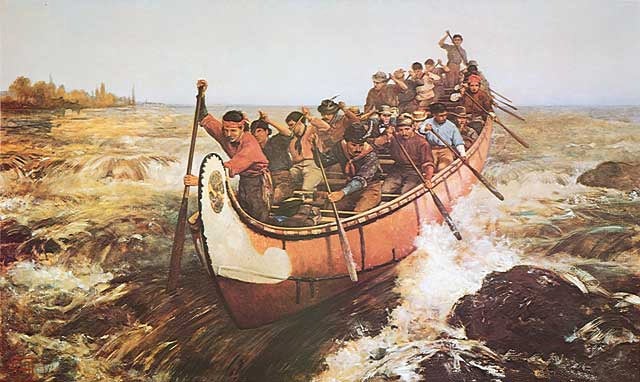 Shooting the Rapids was painted by Frances Anne Hopkins in 1879. Public Domain via Wikipedia Commons
SHARE

In the course of this blog, I’ve written about a variety of people who possessed the currently-unfashionable traits of strength, endurance, fortitude, and the ability to greet each horrible new day with a song. Yet I seem to have skipped the most outstanding bunch of all: the Quebecois known as les voyageurs –the travelers.

What keeps them from the fame accorded to soldiers, mountain men, gunfighters, and other hard cases, is that they never got to kill anyone. This was not their fault. French Canadians had a taste of war in the 18th century, and killed a reasonable number of British and Native Americans, but their hearts were never really in it. How do you make a movie or write a novel about people who simply worked brutally hard and never packed a gun? You don’t.

Voyageurs made the fur trade of the 18th and 19th centuries possible. It was run out of Montreal, and began officially in 1670, when the Hudson’s Bay Company was founded, and in 1784 the North West Company opened. In 1808, John Jacob Astor established the American Fur Company, and by 1830, it had a near-monopoly. Astor became the first American multi-millionaire and amassed a fortune that, in today’s dollars, would amount to $100 billion.

But Astor’s fortune was built on the sweat of underpaid, courageous, and supremely skilled outdoorsmen. At the height of the fur trade there may have been as many as 3,000 of them on the water at one time.

It was a tough way to make a living. Voyageurs transported trade goods from Montreal to the western reaches of Lake Superior and far beyond that. On the return trip, they carried furs. They lived (and died) in canoes, birchbark over cedar frames, and the main cargo canoe, used on the Montreal-Superior circuit, was called the canot de maître— canoe of the master . A typical one was 36 feet long, 6 feet wide, and weighed 600 pounds. It could carry 3 tons of cargo on the outbound trip and, on the return, 65 90-pound packs of furs called pieces.

An average crew numbered eight to 10 men, but it could go as low as six or as high as 12. Most voyageurs were short, as long legs and canoes do not mix well. They were also illiterate, and, like saltwater sailors of the time, hardly any of them could swim, which could be inconvenient.

Their day was backbreaking. It started at 2 or 3 AM. Breakfast did not come until 8 AM. Lunch was a lump of pemmican that you ate while you paddled. The only breaks they caught were a few minutes each hour to smoke a pipe, and the intervals between these breaks were known as “pipes” and were used as a measure of distance. Each man was expected to work a 14-hour day and paddle at a rate of 55 strokes per minute, which could move a canot de maître at 3 mph on calm water.

When they ran out of water in which to paddle, they portaged. Each man was expected to shoulder two packs, or 180 pounds, unless you were one of the four men detailed to carry the canoe, in which case you got to carry that, too. Frequently, they’d carry more, and some voyageurs are supposed to have lugged five packs at a time, or 450 pounds. (A typical portage may have been only a half-mile, but even so….)

The day ended between 8 and 10 in the evening. Dinner was likely to be a stew made from dried peas and salt pork. It was called rubaboo, and its gastric side effects probably helped keep down the black flies and mosquitos. There was no hunting along the way and therefore no fresh meat. Their employers expected them to travel just as fast as they could, and a pause for hunters to do their work was out of the question.

I mentioned singing. Voyageurs sang constantly, both to help them forget how miserable they were and to help keep their timing as they paddled. Apparently group singing is still a tradition in French Quebec. I was in a hunting camp on Anticosti Island with a group of chasseurs Quebecquois and couldn’t wait to get into the woods by myself where I wouldn’t have to listen to them.

It says in my Wikipedia source that voyageurs worked into their 60s. I have my doubts. I can’t imagine anyone laboring that hard, in so dangerous a profession, for 40 years plus. (Would you want to paddle a canoe far out on the big lake they call Gitchi Gami? Superior, it’s said, never gives up her dead, when the skies of November turn gloomy.) If they didn’t drown in a storm, or in the rapids, they would be crippled by hernias, worn-out knees and hips, wrecked backs, or simple exhaustion.

But they were probably the toughest outdoorsmen in North America. Even if they didn’t go heeled.

Note: This post was inspired by the arrival of The Boundary Waters Catalog, which is printed by the Piragis Northwoods Company. Piragis is a small family-run outfit that sells high-grade knives and axes, survival gear, gorgeous canoes and paddles, very cool books, including one on farting, and all sorts of stuff oriented toward paddling the waters between Minnesota and Ontario. If you can read it and not find something you need, check to see if you have a pulse.