While the breeding peak has likely come and gone in the Midwest and East, things are still building across much... 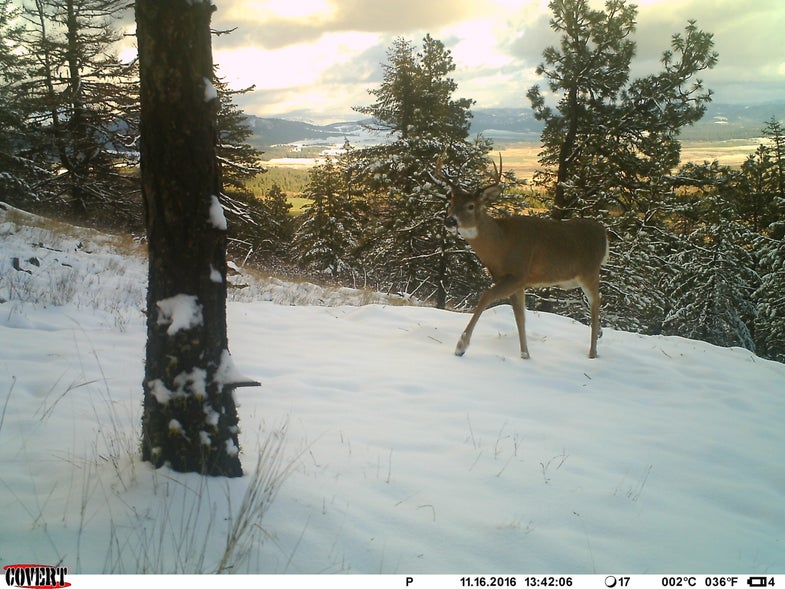 With fresh snow on the ground, the hunting is getting good in eastern Washington.. Garry Greenwalt
SHARE

While the breeding peak has likely come and gone in the Midwest and East, things are still building across much of the West. Whitetail nuts from Texas and up through Washington are looking at some of the best days in their future. Like much of the country, the West has been unseasonably warm this fall, and that’s hamstrung a lot of daytime deer activity. But a single cold front could change that in a hurry, and it looks like our Best Day No. 5 could be a good one in the region, with cooler temps predicted in many areas. Here’s how things are shaping up.

Montana Whitetails ownerKeith Miller says even the mild weather hasn’t slowed buck activity. “Deer movement has been really good despite the warm temperatures. About six days ago we started seeing more bucks moving around and bothering any does feeding in the fields. The does where not ready at that point, however, but rutting action has been heating up the last two days. We saw a few bucks the last two days standing with does and staying with them with every step. A couple hunters over the weekend saw bucks chasing does. Grunting and rattling have been effective as some hunters called their bucks in. It’s that time of the year, typically the 14th of November is when we see the first bucks breeding does, and it’s right on target this year. The next few days should be really good.”

Greg Badgett of Double B Outfitters in Texas said warms conditions have been holding bucks back, but that could soon change. “Weather has been hot here in Texas, but we’re looking forward to seeing some cooler weather this weekend. Right now the deer in central Texas are in full rut, but daylight activity seems to be limited to younger bucks, thanks to warm temps and the bright full moon,” he says. “The mature bucks seem to be mostly nocturnal, but I expect that to break in the next few days, with mature deer starting to kick it in a bit more; being a lot more aggressive and moving better in the daylight. Did I mention we’re looking forward to colder temps this weekend?!”

For all-out enthusiasm, it’s tough to beat Garry Greenwalt right now. Greenwalt owns Wild Country Guide Service in eastern Washington, and is to my knowledge the first person to post a trail cam pic of a buck in the snow this year. Garry hunts a mix of habitat in the foothills, and called in this report: “From what I see, I’d say the rut is kicking into full swing here. My cameras are showing lots of young bucks cruising through the baits and food plots, with a few mature bucks too. I guided a client to a decent 5X5 a few days back, and I’ve spent a few days checking cams and scouting in our fresh snow! This is definitely a time to be calling, and the next few days should be really, really good as the mature bucks get more active. If I weren’t guiding, I’d love to be out there with a bow in my hand right now!”