What Happens When a Choke Tube Fails 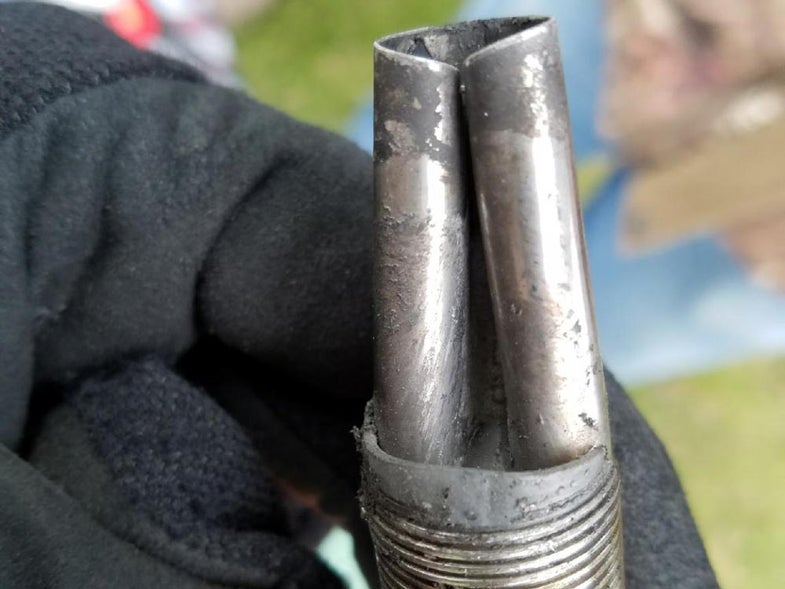 This choke tube split at a trap shoot likely because the shell's wad got caught on the tube's skirt.. Phil Bourjaily
SHARE

Choke tubes make shotguns more versatile. They are also one more part of a gun that can break, potentially with catastrophic results. The tube seen here split at a recent SCTP trap shoot.

The next shot, the tube rolled up like a tamale. The wad must have caught on a piece of the tube’s skirt that was blocking the barrel. You can see the gray plastic of the wad embedded above the threads. The barrel threads, surprisingly, were undamaged, and the tube remained in the barrel.

The odd and scary part is that the gun made a bloop sound when it went off, like when you shoot a reload without enough powder in it. But, the target broke. Normally when you have a blooper, the shot goes a few feet out the barrel. If it exits hard enough to break the bird, you should be able to safely assume the wad exited, too.

Not this time.* Because the shooter had good safety training, she checked her barrel for obstruction. We unscrewed the tube, put in a new one, and she was back to shooting. If she had shot again, the barrel would have burst.

Chokes can split if they start to back out slightly, and plastic and fouling builds up under the skirt. When enough fouling gets between the choke and the barrel to lift a the skirt into the bore, it can catch the wad, as this one did. Make sure your tubes are snug. Also, if you ever drop a tube, check it very carefully to be sure it’s still concentric. The steel is thin and chokes are fragile, and an out-of-round skirt can snag a wad, too. Depending on how much you spent on the tube, either toss it or have a gunsmith straighten it out for you.

And, any time you hear an odd sound on report, check your barrel, even if you hit what you’re shooting at. The fingers you save could be your own.

*On a side note, this is how wad-stripping chokes work, except for the splitting and possibly blowing up the barrel part. Ports and studs in the choke slow the wad enough to make it separate cleanly from the shot, preventing the wad from disrupting the pattern by yawing or pushing into the back of the payload.