Birds of Paradise: Where to Hunt Mottled Ducks in Florida 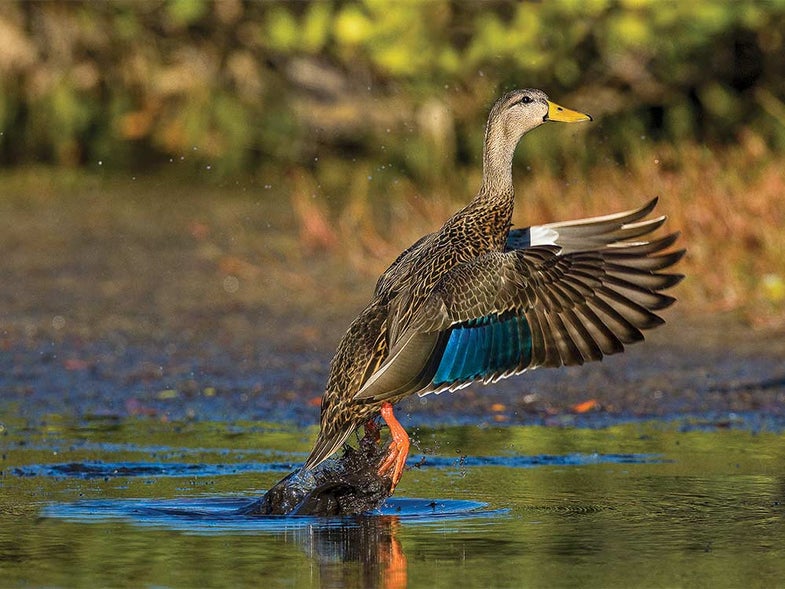 Mark McBride pointed through a thin beam of headlamp light to a canal just to our left as we walked in the pitch black to a 50-acre flatwater impoundment in central Florida. “Watch out for the gator,” he said. When he scouted the spot a few days before, he had spotted a 10-footer in the deep water right next to where we now were.

The ducks, on the other hand, we would soon see clearly. At sunrise, the tropical sky had tinted pink. A few cabbage palms broke up the distant horizon, and small flights of teal buzzed the opposite mud hump of a levee. “Ducks don’t respond much to decoys or calling down here,” McBride said. “You have to be where they’re going.”

Field & Stream editor-in-chief Colin Kearns and I waded through the flat water and had just set up on a patch of dry ground when two birds swung over. They spotted us 40 yards out, then banked away. Kearns spun 180 degrees, shot, and stoned the second in the pair—a gorgeous drake mottled duck. As soon as he picked it up, we heard shots back by McBride. Two birds fell from the sky over him. “You’ll get your mottled duck next,” ­Kearns said. It was a boost of encouragement—one that’d soon feel like a curse.

Luck of the Draw

For hunters like me who are working on the North American waterfowl slam, Florida is a must-stop destination. Done right, you can check off three hard-to-hunt species from the list there: the fulvous and black-bellied whistling ducks and the highly prized mottled duck. “It’s not the state bird,” said McBride, a biologist with Florida Fish and Wildlife Conservation Commission, “but it should be.”

At 4 a.m. on our first morning, we stood near the check station at T.M. Goodwin Waterfowl Management Area with more than 100 other waterfowlers hoping to draw a permit to hunt. The 3,200-acre Goodwin and an adjacent Ducks Unlimited project, the 2,900-acre Broadmoor Marsh, were the first moist-soil units in the state and offer some of the best duck hunting anywhere—if you can get in.

Two guys in ratty camo hats handed out blue raffle tickets. As we waited, an older fellow with glasses and a Stormy Kromer cap walked over to McBride. “You’re not giving away my spots, are you?” he said.

No gamebird is more identified with a place than the mottled duck is with Florida. Its range reaches from Tampa down to the Keys and along the western Gulf Coast—though Louisiana and Texas mottled ducks are distant cousins to the Florida birds—and it is the only known puddle duck adapted to nesting in hot Southern marshes. Mottled ducks look like black ducks, and the best examples have ink-black primaries laced with a khaki drab.

As the raffle numbers were read, the crowd went quiet. Everyone in our group got in, and Kearns would shoot a wall-worthy drake. I shot at a nice one too—and missed. The next day was no better.

I didn’t think I looked desperate by the evening before our last hunt, but folks in our group kept saying stuff like, “Don’t worry, you’ll get one.” McBride came over and said, “You’re with the mayor tomorrow to hunt the mottled duck tree.”

The next morning, Richter and I were rolling to his secret spot in the upper St. Johns basin. With spotlight in hand, Richter ran the network of backwater channels full-bore, shouting over the outboard: “Sometimes they fly east to west, sometimes west to east. But they always pass over the mottled duck tree.”

I could just make out an ancient loblolly—lightning-struck, the burnt husk of a once-great tree—silhouetted against the dark sky and flanked by two cabbage palms. We waded toward the tree, then tossed six decoys. Before I could take a sip of coffee, Richter said, “They’re coming!”

Boom! Richter’s gun went off, and a bird splashed next to me. The two birds with it kept moving, trucking now, 30 yards out. I got on the lead bird and splashed her down. “Nice job,” Richter said as he moved to pick up the decoys. We hadn’t been hunting 10 minutes. “You don’t want to wait it out for some teal or gray ducks?” I asked.

He shook his head. “This place is what it is because we don’t do that,” he said. “It will always be this—this view, these ­waters. The trees may change some, but the spot will always be.”

I set my mottled duck on the boat seat and ran my hand down the silky breast feathers. “There are still wild places in Florida,” Richter said, “if you know where to look for them.” Wild birds too.

Gear Tip: Have Cooler, Will Travel

The surest and safest way to get trophy birds through an airport, onto a plane, and home safe is with a soft-sided cooler. I brought along a Yeti Hopper Flip 12 ($249), which can hold two big ducks and is small enough for a carry-on. Freeze the birds solid before the flight, then lay them in the cooler on top of a medium-size ice pack. The TSA agent at the X-ray machine might look at you sideways, but your taxidermist back home won’t.